Looks like we'll have to wait a little longer for a fully automated one
Jun 27, 2011
CAR BRANDS IN THIS ARTICLE 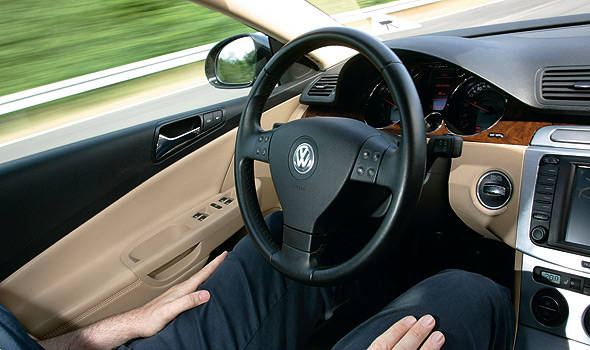 Volkswagen cars might soon have the semblance of being able to drive themselves as the German carmaker is working on what it calls the Temporary Auto Pilot (TAP).

"What we have achieved today is an important milestone on the path towards accident-free car driving," said Dr. Jürgen Leohold, executive director of Volkswagen Group Research at the final presentation of the European Union research project HAVEit (Highly Automated Vehicles for Intelligent Transport) in Borås, Sweden.

"The driver always retains driving responsibility and is always in control," Leohold added. "The driver can override or deactivate the system at any time and must continually monitor it."

According to Volkswagen, the TAP system is "intended to prevent accidents due to driving errors by an inattentive, distracted driver."

In its semi-automatic driving mode, the TAP system maintains a safe distance between its host vehicle and the vehicle ahead, drives at a speed preselected by the driver, decelerates as necessary before a bend and maintains the vehicle’s central position with reference to lane markers. The system also observes overtaking rules and speed limits and is very useful in stop-and-start driving situations like traffic jams.

In contrast to autonomous research vehicles which make use of expensive optical remote sensing technology to create a three-dimensional map of its environment, TAP is based on a relatively production-like sensor platform which consists of production-level radar-, camera-, and ultrasonic-based sensors supplemented by a laser scanner and an electronic horizon.

Although it's possible to drive up to 130kph on highways or similar roadways with the TAP system, Volkswagen maintains that drivers "must still continually focus their attention on the road so that they can intervene in safety-critical situations at any time."

PGA Cars reportedly to get Lamborghini rights on probationary terms
View other articles about:
Recommended Videos
Read the Story →
This article originally appeared on Topgear.com. Minor edits have been made by the TopGear.com.ph editors.
Share:
Retake this Poll
Quiz Results
Share:
Take this Quiz Again
TGP Rating:
/20