Would you shell out P1.35 billion for a car?

Well, somebody did
May 6, 2010
CAR BRANDS IN THIS ARTICLE

An extremely rare 1936 Bugatti Type 57SC Atlantic now holds the record as the most expensive car in the world as it fetched a price estimated to be between $30 million and $40 million (at least P1.35 billion at $1:P45) at an auction held by Gooding & Company.

Although Gooding & company did not disclose who the buyer was and how much was shelled out for the Bugatti, a report from the Wall Street Journal says that it was the Mullin Automotive Museum in California that bought the car for somewhere between $30 million and $40 million, easily surpassing the $12.2 million a 1957 Ferrari 250 Testa Rossa sold for last year.

"I am extremely pleased to have found the new buyer for the 1936 Bugatti Type 57SC Atlantic, one of the world's most significant and valuable automobiles that has been in a private collection and rarely seen during the past four decades," Goodling and Company president and founder David Gooding said in a statement. "It has been a great pleasure to work with the Williamson Family and Trust in this important endeavor."

Only one other Bugatti Type 57SC Atlantic exists and it belongs to famed clothing designer Ralph Lauren, AutoBlog.com said. What makes Williamson's car special, however, is that Gooding & Company says it "is the first in the series and its historical significance, originality and restoration has been revered by enthusiasts throughout the world." 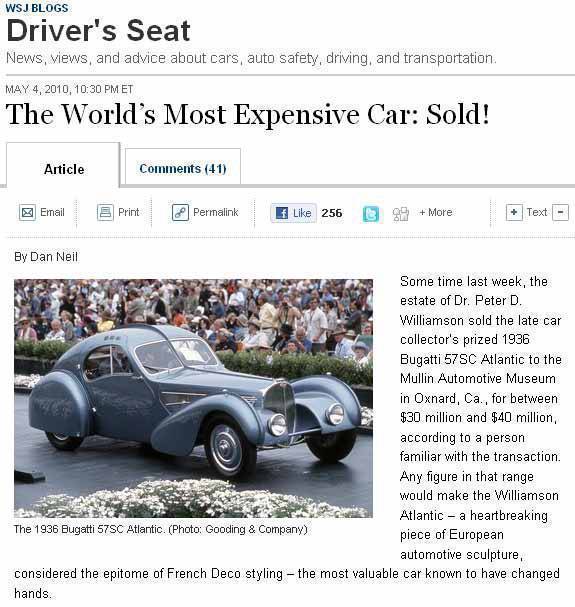