Here's a car built to give you a fighting chance
by Andy Leuterio | Oct 25, 2013
CAR MODELS IN THIS ARTICLE 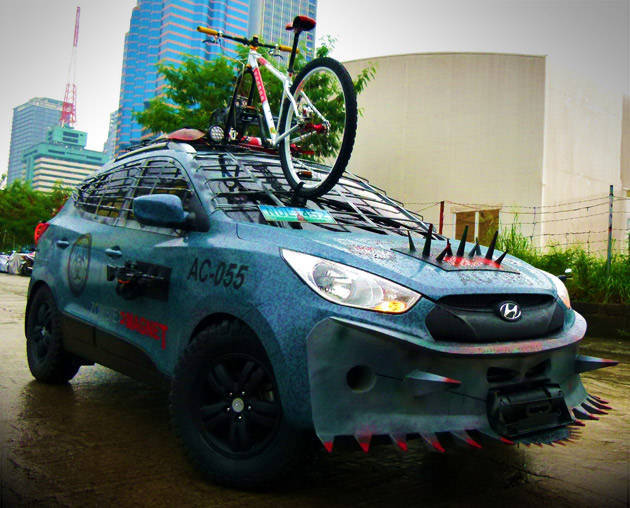 It's not every day that I am fetched by a convoy on trendy Bonifacio High Street. Granted, it was a small convoy of just two vehicles, but it wasn't just any convoy: a black, nondescript Hyundai Starex being the first vehicle, and the other one being the zombie-killing Tucson.

Disclaimer: I know the car was inspired by the hit series The Walking Dead, in which a Tucson is the protagonist's trusty ride. But I have yet to see a single episode, so I won't pretend to know the plot line, the story arc, or even a single character.

I have, however, enjoyed my fair share of zombie flicks, ranging from the recent World War Z, all the Resident Evil movies (who doesn't love Milla Jovovich, right?), Will Smith's I Am Legend, Danny Boyle's 28 Days/Weeks Later movies, Zombieland, and of course, Shaun Of The Dead where I learned that not even the neighborhood pub is safe from the reeking hordes.

Zombies aside, I just love apocalyptic-themed movies where the general plot is that the hero must raise mayhem to survive the hell on Earth. Heck, I even liked the 1980s B-movie Def-Con 4. Then there's Battle Truck, the Mad Max movies, and Death Race. In almost all these movies, there is always at least one car involved. And if the car must itself be used as a weapon--or festooned with weapons--so much the better.

Manila has been called the gates of hell, and I couldn't agree more. What if you could fight back in a car built to give you a fighting chance?

What motorist hasn't fantasized about mowing down scores of undead jaywalkers, ramming into petrified, rabid, lane-blocking PUV drivers, and pulverizing the putrid, 8-plate wearing minions of Satan? Wouldn't you just love to pull the trigger and get even an ounce of satisfaction out of decapitating, mutilating, impaling, and just plain messing up all who deserve some Old Testament justice?

Fortunately, Hyundai Asia Resources Inc. was happy to indulge my little fantasy as they let me have the keys to the Tucson zombie survival machine for a few hours. But as I would find out, even a Tucson armed to the teeth is not without some practical drawbacks.

Here is what transpired.

3:00pm: I walk up to the waiting Tucson, but cannot immediately drive away. This is because my way is blocked by a throng of people (all of them quite healthy) clamoring to take pictures of the Tucson. In the spirit of the moment, I patiently sit in the car as they merrily snap away and take dozens of selfies. Fortunately, the dark tint prevents me from photobombing their Instagram accounts.

3:20pm: I am off! To where? Good question. Where exactly does an erstwhile zombie killer go on a busy Thursday? Taking stock of the Tucson's arsenal (two door-mounted machine guns, one roof-mounted minigun, several handy MP5s, one lethal shovel, one fire extinguisher, several spikes and sawtooth discs), I notice that there is no Plan B for transportation.

What would you do if the Tucson ran out of gas? You can't outrun zombies. Remembering how the SEALs did it in World War Z, I drive over to All Terra Cyclery in Ortigas Home Depot. Its owner, my good friend Edmund Mangaser, was only too happy to lend me a bike and send me off. It seems the Tucson has scared away all his customers. A bloody grille can do that. Noting that the roof has been taken over by all that ordnance, we resort to a SeaSucker mount for the bike. This means the bike looks funny with the rear tire over the hood, but try laughing while staring into the business end of that minigun.

3:40pm: Let's go for a cruise! The Tucson has a very lethal bumper, what with all those spikes and that power saw. Aside from making mincemeat out of random zombies that get in our way, it is an excellent deterrent against pedestrians who give it a wide berth at stop-and-go traffic, not to mention all those motorbike riders who like to zip inches away from cars. Nobody wants to get too close to this Hyundai. Mainly because they like staying several feet away so they can take full body shots of the car.

On the road, the Tucson is still quite a drivable SUV, notwithstanding its all-terrain Bridgestone tires and all that hardware clanging and banging on the roof and at the back. I briefly entertain the notion of getting up on the roof to test-fire the minigun at some pestilential taxicabs, but I am gently discouraged by our passenger, whom I'll name "Sergeant Rock" (HARI requested I withhold his real name). He points out that there is no imminent threat, so no need to waste ammo. Besides, firing the minigun involves stepping out of the car and clambering on the roof, and it's pouring buckets. Nobody wants to catch a cold while killing zombies.

4:00pm: How would gas station attendants react to this thing? To find out, we pull into a station where they follow the script and ask us what fuel we want. Noting that the tank is still full, I request that they just clean the windshield. It's either the strangest request they've ever heard, or they just don't want to get too close to all those guns. Not a single attendant humors my simple request. Perhaps they're already infected.

I have to take matters into my own hands and clean the windshield myself, whereupon I manage to slash my knees against the spikes, skin my knuckles against the bars covering the glass, and generally get a failing grade in "Windshield Cleaning Operation" (I know for a fact that fuel companies take this very seriously). It's at this point that I notice that quite a crowd has gathered around me once again. They are shuffling and grunting, and generally not looking very friendly. They don't smell very nice, either--a hint of rotting flesh here, some fecal aroma there, and some Old Spice. Who the hell still wears that, right?

Not quite sure what to do, I remember a lesson from wasting my childhood playing Doom: Shoot first, ask questions later. I jump up on the roof, nearly impale myself on an eight-inch spike, power up the minigun, and let 'er rip! Hooyah!

Mental note: Wear earplugs when firing live ammunition. And always say "Excuse me" in the presence of random civilians.

Sergeant Rock suddenly yells "Fire in the hole!" and tosses a little round object in the crowd. Uh-oh.

There's a flash of light. An explosion that goes something like "BOOM!" A wave of energy that feels like someone has punched me in the chest. At first I think I've been blinded, but then I realize that bits of brain matter are messing up my glasses.

I spit out a chunk of liver that has gotten in my mouth. Blech. The crowd is (mostly) in pieces. But another wave is on the way. Damn, killing zombies is hard work. How does Milla make it look so easy?

5:00pm: After plowing through scores of bodies, expending several thousand rounds, and whacking a few persistent deadbeats with that shovel, it's time to call it a day. By now, the Tucson has accumulated a disgusting collection of viscera on its fascia and has stained its body a rich, sticky shade of crimson.

Like my students like to say, "Eww." Might as well add, "Ick!" We steer the Tucson into a carwash where the boys may look zombie-like but are actually quite lively. They are good sports washing off the Tucson, even if the newest guy has the unenviable task of cleaning the rear bumper slasher blades with a toothbrush. "Kuya, putek ba ito?" he asks me once, poking at some little bits on the bumper. "Utak yata, bro," I reply. Hey, everything's cool as long as you give them a big tip!

6:00pm: As the good people of Hyundai return me to Bonifacio High Street, I reflect on the practical considerations of owning such an SUV. It's still quite a drivable thing, it inspires lane discipline better than a blacked-out Hummer, and is the rolling, fire-breathing, bullet-spitting embodiment of the ultimate "Comprehensive Insurance Policy." Call it the Apocalyptic Crossover. I definitely want one, but I think I'll get mine in black. Easier to hide the blood stains. 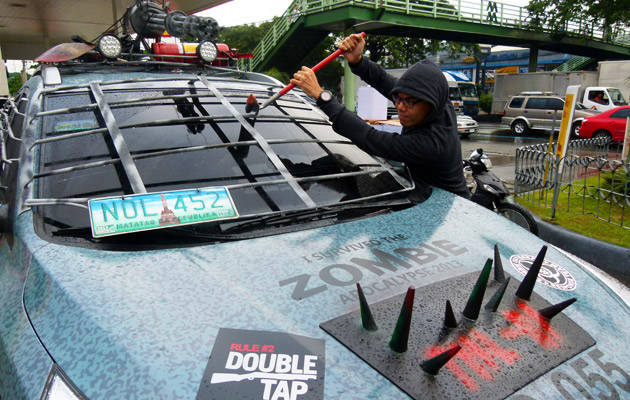 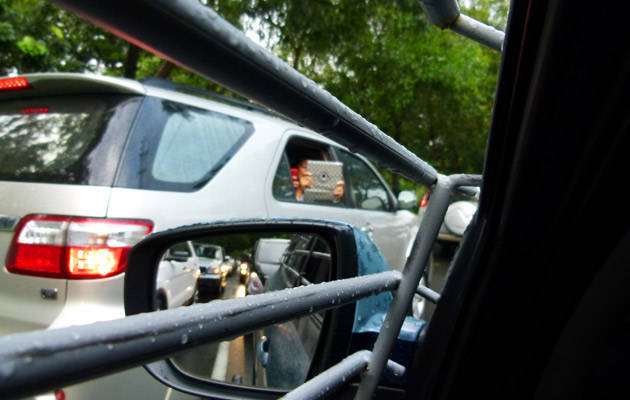 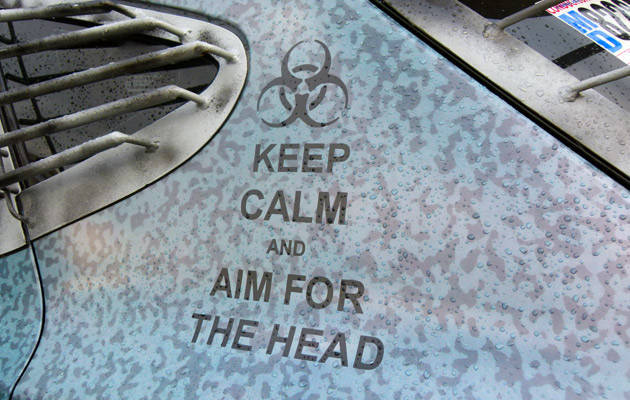 A reader asks: Which vehicle below P500,000 should I buy?
View other articles about:
Read the Story →
This article originally appeared on Topgear.com. Minor edits have been made by the TopGear.com.ph editors.
Share:
Retake this Poll
Quiz Results
Share:
Take this Quiz Again
TGP Rating:
/20