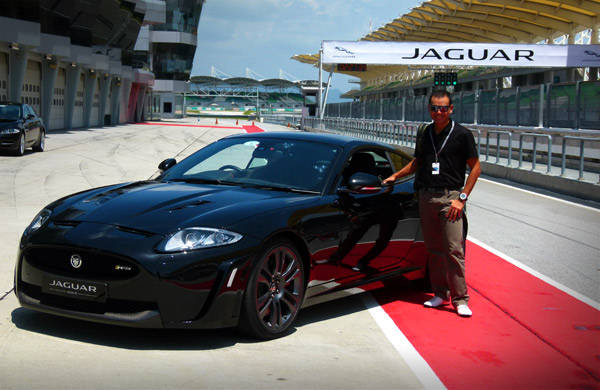 I've always had a soft spot for Jaguars. The British marque has had its own stamp on luxury, and you could always be pretty sure that there weren't too many of them prowling around the city unlike your usual German luxury car.

Getting word from the Chief that I had a slot at a recent Jaguar track day in Malaysia, I packed my suitcase and flew off for a day of lapping the cats around Sepang International Circuit. Together with several other media colleagues and a few Jaguar Philippines customers, I was quickly briefed on the day's activities, which, in a nutshell, were: "Get in. Drive fast. Repeat." To think my first-ever Jaguar experience was a 20kph drive inside a subdivision!

Prior to this track day, the only time I had actually ever driven one was way back in 1997. It was the afternoon after ROTC. My blockmates and I had retired to our friend's home to shoot the breeze as college kids are wont to do. Our friend's father was quite a car enthusiast, and generously lent us the keys to several of his cars for a slow drive inside the subdivision. So we took turns behind the wheel of a Miata, a 1993-model 911 and a Jaguar XJ6. I liked the go-kart feel of the Miata and the purpose-built sportiness of the 911, but the Old World charm of the Jaguar was what stuck in my mind.

The leather was extra supple and fragrant. The wood trim was exquisite. The detailing had the look and feel of being handmade in some artisan's shop way over there in Coventry. It just had that aura of Englishness about it that was quite different from the stoic precision of the German brands or the Zen-like elegance of Lexus.

Of course, a lot of things have changed since 1997. Jaguar has since shunned the classic look of its cars for a more modern aesthetic while retaining the feline sleekness of its model line. It has tried hard to rectify its reputation for electrical gremlins, and the drivetrains are state-of-the-art. Long gone is the legendary (and inefficient) V12 of the '80s, and the classic XJ body style I first admired in the TV series The Equalizer. In their place are remarkably efficient engines in six-, eight- and four-cylinder configurations. They even have diesels, for crying out loud. God save the Queen. 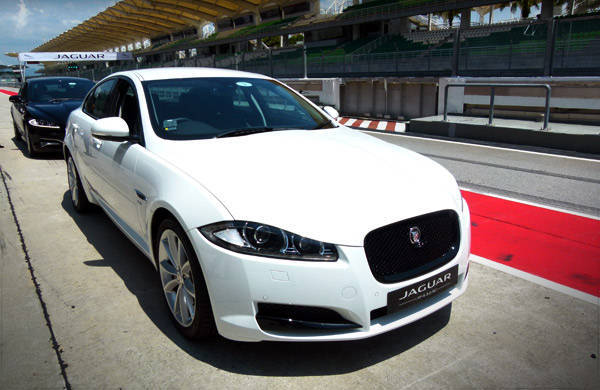 First on the menu were several laps inside the XJ-L and XF-S, both powered by a supercharged, 340hp 3.0-liter V6. The modern descendant of the aforementioned XJ6, the XJ-L is a big saloon in which I would be happy to be seated in front or at the back. Despite being a comfort-based car, it had the moves to lap Sepang with confidence, if not alacrity.

Led by an instructor in a pace car, I was struck by the tactile precision of the steering and the disciplined suspension. It's not a luxury boat, even if the back may look a bit yacht-like. On the long straights, I floored the throttle and got the car up to 180kph before it was time to hit the brakes for the nasty corkscrew of Turn 1. As nice as the car was to drive, I honestly loved the interior more.  I mean, it has the classiest cockpit I've seen in a long time. Just check out that clock and those A/C vents. 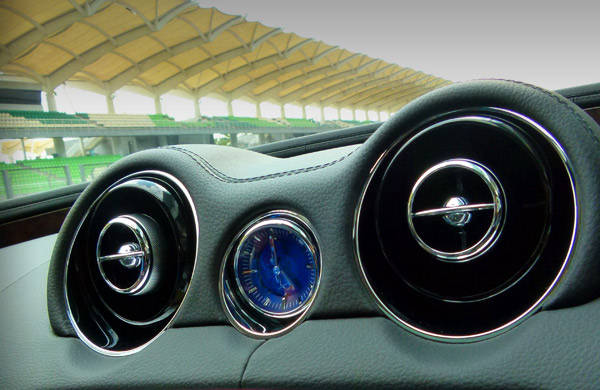 Right after the XJ-L, we swapped cars and I got into the XF-S. This luxury sports sedan feels light and powerful without feeling overtly harsh. I put the shifter dial into "S" to play with the six-speed automatic and discovered that it's programmed to hold the gears at redline, unlike many conservatively programmed automatics that shift for you even in manual mode. The XF-S predictably felt more nimble around the track, with even sharper steering and a slightly stiffer feel. By the way, it's interesting how Jaguar shuns the traditional shift lever for an elegant dial on the console, probably to save on space as everything is drive-by-wire anyway.

To showcase the low-speed handling chops of the car, our next exercise was a slalom using the XF with the 2.0-liter turbo four. Ten years ago, it would have been sacrilegious to put a four-banger in a midsize luxury car, but technology enables the little engine to pump out a respectable 240hp. Admittedly, the engine is lifeless below 3,000rpm if you're gunning for "King of the Parking Lot" title, but things brightened up considerably later as I lapped the entire racetrack to stretch its legs. Anyway, the slalom was a fun way to try out the car's lightfooted feel. Who'd have thought a midsize car like an XF could dance around some cones and stop on a dime? 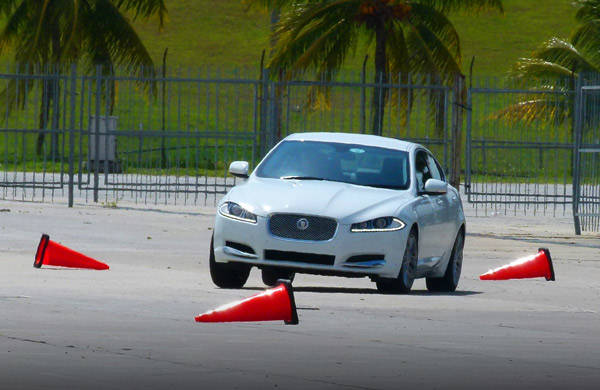 Of course, the big highlight of the day was the "taxi ride" around the racetrack inside the XKR-S! The 550hp beast is intimidating to look at, especially in the sinister black of the units Jaguar brought out to play. They wouldn't let us drive the XKR-S around the track, but Jaguar did the next best thing by pairing us with a couple of professional drivers. As I strapped in, my driver "Miles" briefed me on what to expect.

"Alright, this car has a lot of power and grip, but it has to be driven with finesse," he said. "Otherwise, it will bite back. I'm going to turn off the stability system to let the tail come loose, but I won't be drifting it."

I almost protested at the last part. I mean, what the hell, right? But I changed my mind. Trust the experts with this sort of thing.

So, I strapped in and Miles let it rip. Between the orchestral howl of that big V8 and the g-forces pushing me to the left and to the right of the seat as we flew through the turns, I was half-expecting the car to reach liftoff speed like a small fighter plane. All throughout, Miles actually looked bored as he'd brake late for a turn and smoothly turn in, and we'd rocket out of the corner while preparing for the next. 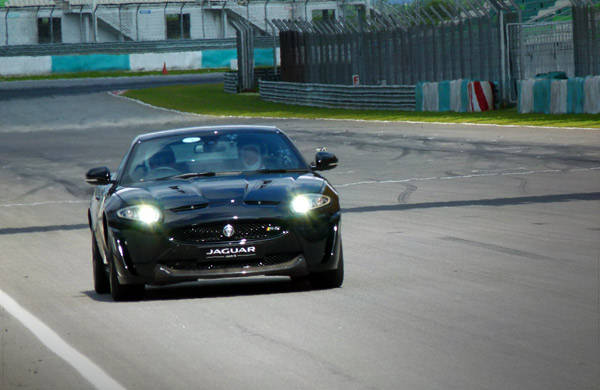 Meanwhile, my sphincter muscle was tightened all the way up to 11, and my heart was pounding in my chest like it was the last stretch of a marathon. Toward the back side of Sepang was a couple of sweepers, and here Miles put in enough power to hang the tail out before getting the car back in line for the finishing straight, topping out at 240kph before it was time to brake hard (and late) into Turn 1. I successfully stopped myself from squealing in terror as the wall rushed toward us at what seemed to be the speed of fright, although I found my right foot digging into the footwell, pressing a non-existent brake.

Miles was kind enough to give me a more relaxed second lap so I could put my internal organs back in their proper place. He also took the opportunity to tell me all about the wonderful stuff of the XKR-S, like how the only transmission is a six-speed automatic, or how it has an active rear differential, or how much torque it has (680Nm) and how docile it can be if you're just cruising along. 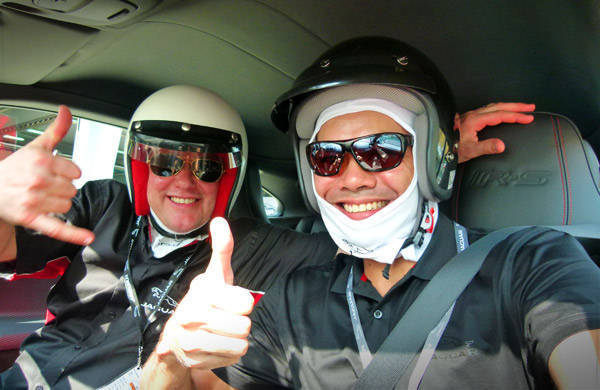 I got out of the car and waited for the world to stop spinning before moving on to the next exercise: fast laps in the 2.0-liter XF. I never thought I'd see the day where I'd be driving a four-cylinder Jaguar, but that's progress right there.

Still, when you've been driven around at a pretty insane velocity in one of the world's fastest sports cars, even a 240hp luxury car seems pretty tame no matter what anyone says. It got to a point where I was stuck to the tail of the lead instructor's car, urging him to drive a little bit faster. And faster. And just a little bit faster, pretty please.

The day ended with a simple unveiling of the first F-Type to hit Southeast Asia, painted in "arrest me" red and dripping with sexiness, purring at idle and positively roaring like a very pissed-off cat when the throttle was blipped for fun.

Today's Jaguars still make you feel like one of the wealthiest, classiest people in the world, but they can also run surprisingly fast and smooth. And here's the kicker: They're now also youthful. No fat cats, these modern-day Jaguars. 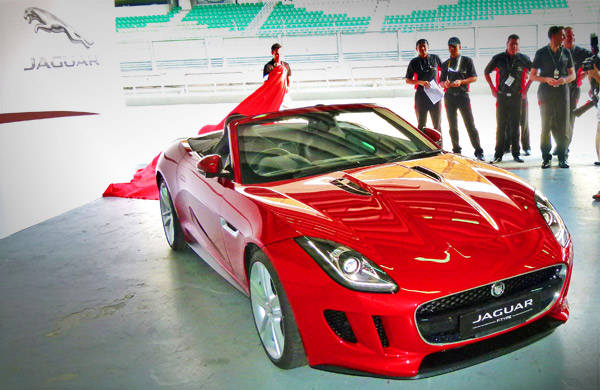 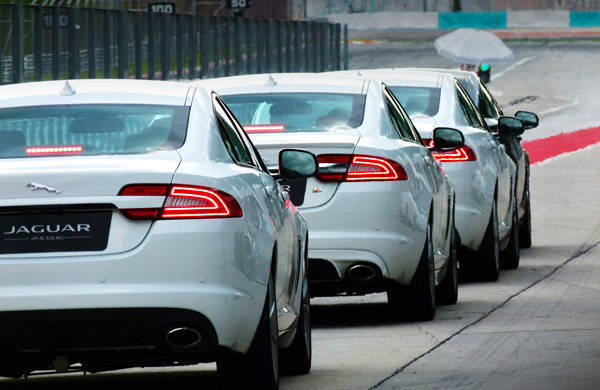 A Top Gear PH reader asks: Which crossover should my sister get?
View other articles about:
Read the Story →
This article originally appeared on Topgear.com. Minor edits have been made by the TopGear.com.ph editors.
Share:
Retake this Poll
Quiz Results
Share:
Take this Quiz Again
TGP Rating:
/20