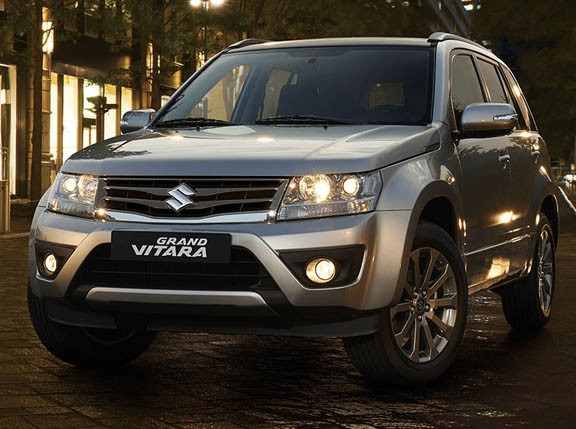 The compact-SUV arena is fast becoming the most crowded field in the automotive industry, and with good reason. Many motorists are looking to small SUVs in lieu of the traditional sedan. Suzuki entered the fray with the off-road-capable Vitara in the late ’90s, then catered to the more comfort-oriented market with the Grand Vitara. This latest model featured here is an update of the car launched in 2006.

Externally, the Suzuki Grand Vitara is a textbook interpretation of a modern compact SUV. If you cover up the badges, the exterior can practically pass for anything from a Toyota to an entry-level Land Rover. Both the clamshell hood and the mesh grille are neat touches, as are the chunky 17-inch alloy wheels. The car has the same down-to-earth charm as its stablemate, the Swift. The clean, angular styling will no doubt age well, too.

There are three prerequisites that make for a decent compact SUV: a tall ride height, a roomy cabin and easy maneuverability. The Grand Vitara scores decent points on the first two criteria, and even a higher mark on the third.

First off, the ride height is adequate for vehicles in this class. You won’t be looking eye-to-eye with a G-Liner bus driver, but you can see over the roofs of those pesky sedans. Getting in and out is painless, thanks to the wide door openings as well as the high-mounted seats. The rear-door-mounted spare tire increases luggage room. It hampers rear vision during parking, but otherwise isn’t much of a drawback.

There’s surprisingly a good amount of legroom in the backseat, although with a bit of trickery involved: The seat has been pushed far against the rear wheel well, such that parts of your rear anatomy will be rubbing against the hard plastic. As can be expected, the rear seats split-fold in a 60/40 ratio. One clever bit is that the middle belt is built into the seat, so folding doesn’t require the tedious untangling and tucking of a belt into the trunk area or the ceiling, as with some other cars in this class. With one rear seat and the front passenger seat folded down, the cabin is long enough to swallow a narrow, two-meter-tall, knocked-down Ikea cabinet.

Cabin materials consist mainly of hard plastic and itchy fabric. The cabin is a curious mix of modern technology and dated styling. The brown color scheme and the instrument-panel layout, for instance, make us want to party like it was 1999. Adding welcome touches of up-to-date gadgetry are the Lexus-style luminescent gauges, with a graphical trip meter underlining the speedometer. They’re bright and easy to read.

Meanwhile, the automatic climate control’s display--a small, round window tucked into the dashboard--looks like something out of a Flash Gordon movie. The steering wheel does incorporate audio switches, but it still feels cheap and out of place in a vehicle of this price.

The new tenant under the hood is a 2.4-liter DOHC powerplant that is mounted longitudinally. With 165 horses and 225 Newton-meters of torque, it makes for smooth and quick progress through traffic. Variable valve timing helps the engine to maintain its response, even as the revs climb past 5,000rpm.

The weak link here, however, is the four-speed automatic transmission, which sometimes hunts for gears and hesitates to engage. Launching the car from a standstill involves a bit of a pause while the transmission hooks up before delivering power to the two rear wheels—yes, the Grand Vitara is, uniquely, rear-wheel-drive. It also drinks unleaded gasoline, to the not-so-unreasonable tune of about 7km/L.

What really sets the Grand Vitara apart is its quick steering and the feeling of agility it imparts. The car reacts willingly to steering input, allowing confident lane changes and turns. Heavy body roll and the tall ride height preclude any kind of truly sporty driving, but for the most part, the car—which measures 4,500mm long, 1,810mm wide and 1,695mm tall—feels much smaller than it actually is. The rear-wheel-drive setup no doubt helps in keeping the steering light. A trade-off with the secure handling of front-wheel or all-wheel drive may crop up during copious rain, but in dry to mildly wet conditions, the car feels adequately stable.

Suzuki touts the Grand Vitara’s chassis as a “monocoque with built-in ladder frame.” Theoretically, this combines the rigidity of frame construction with the comfort and better handling of a monocoque; the only other manufacturer we know of that uses such a chassis construction is Land Rover. But since the Grand Vitara’s lack of four-wheel drive rules out playing on the rocks or in mud, the perceived payoff is in the responsive handling. The cabin feels solid and secure even when running over pockmarked roads and multiple road debris left in the wake of typhoon Ondoy.

All the expected amenities and safety features common to cars in this class and price range are present, including dual airbags, antilock disc brakes with EBD, and a six-disc CD changer. An auxiliary jack was not present in our test vehicle, but Suzuki promises that newer units will boast a new and improved audio system that incorporates the all-important MP3-player connectivity.

The Grand Vitara is pegged at P1,270,000. At this price, it goes head-to-head with several formidable contenders. The Honda CR-V and the Mitsubishi Outlander, in their respective 4x2 guise, are the first to come to mind. With its new engine and updated features, the Grand Vitara is a decently equipped, agile and highly competent alternative. 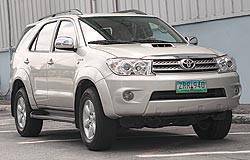