Relax, Subaru fans. The latest STI still pushes all the right buttons. Ulysses Ang sits back and lets the mighty hatchback do the pushing
Jan 29, 2009

For the geographically challenged, Singapore sits south of the Philippines - around four and a half hours by plane from Manila. If you're quick to complain about how scorching our weather is, then you have no idea how it is in the Lion City. ‘Hot' and ‘humid' are the key words, and a quick stroll around pummels this point across: In a mere matter of minutes, you'll be soaked in your own sweat.

It shouldn't come as a surprise to me anymore but it still does, most especially this year when the streets have literally become saunas. The locals pin the problem on global warming. Based on the hot and flashy cars that are the norm here, I have to agree. Of course, things just got hotter with the all-new Subaru Impreza WRX STI.

This isn't the first time I've seen the WRX STI in the flesh. It saw action at the Manila International Auto Show, with precision driver Russ Swift behind the wheel. This time, however, I'll be Mr. Swift. With Singapore known for its strict road rules, there's a heightened sense of danger and anticipation - just like getting caught sleeping with your best friend's girlfriend. But unlike that hanky-panky where everything can still be hushed up, the WRX STI calls attention to itself, even when it's standing perfectly still.

Using the sleek five-door hatchback body as its base, Subaru Technica International then injected the car with massive doses of steroids, transforming this practical family car into the Hulk. It's unashamed of its rally-car styling with its massive intercooler hood scoop, honeycomb grille and front bumper ducts. It also benefits from a widened track and body, while its larger rear spoiler reduces wind drag. Like all WRX STIs before it, it looks downright handsome in its trademark WR Blue Mica skin, but Motor Image head honcho Glenn Tan's dark gray metallic unit looks equally appropriate. Fan boys will feel a bit irate with the softer styling and the loss of the gold alloy wheels, but for the rest of us, it still commands a huge amount of attention.

The loss of the gold alloy wheels signals a more restrained approach on this WRX STI, which is evident in the interior treatment. There is no garish color combination here, just classic, straightforward sportiness. Like its body, the WRX STI starts out with the regular Impreza's high-quality cabin. The shortened and flat dash design gives it impressive interior room and front visibility that's not at all hampered by the extra-large turbo scoop up front. A pinch of differentiation is provided by numerous STI badges scattered inside (there are at least five), as well as grippy Alcantara on the bucket seats and on the center console. For the first time, this WRX STI doesn't come with a Momo wheel, but it won't be missed with the new thick-rimmed, three-spoke wheel.

All this talk about restraint is thrown out the window once the key to the 2.5-liter flat-four is twisted. The turbocharged engine lets out a burble on idle, a preview of the car's performance. Unlike a typical four-banger, the unique layout of the boxer engine means it doesn't let out a mechanical drone, but a smooth monster-in-a-cage baritone befitting a performance car. Beyond Subaru's forced-induction method to increase horsepower, they've employed a new Dual Active Valve Control System that improves the torque curve and increases fuel economy.

Even if I'm not used to steering a right-hand-drive car, the WRX STI is a forgiving car to drive. Despite engaging gears with the left hand, I slot the stick into each of the six gears with precision. The shifter is longer than you'd expect from a sports car, but the space between each gear is fairly small, thereby retaining the sporty feel.

The clutch is a tad on the weighty side, but not to a level that's uncomfortable. Working further in the clutch's favor is a very positive engagement, which allows for easy modulation.

The three-tier gauge cluster features a large center-mounted tachometer with a shift indicator that shows the optimum rev range so as to keep the turbo spooling.

After a kilometer or two of acclimatization, it's time to get down and dirty. The setting for the drive is Singapore's open road, and we are to test the two driving systems unique to the WRX STI. First is the Subaru Intelligent Drive (SI-Drive). First seen on the Outback, it allows for driver-adjustable throttle settings. Second is the Driver's Control Center Differential (DCCD). This little toggle switch located below the SI-Drive knob allows changeable ratios of power distribution between axles with a mere flick.

The drive's highlight is this long, sweeping left-hander that's the source of all the security personnel's headaches with all the tire squeals and the full cacophony of the boxer engines. Taking it first at ‘Auto', the WRX STI behaves impeccably well-balanced, with just a hint of understeer-making it forgiving for inexperienced drivers. The second time around, the system is set to ‘Minus', whereupon the car puts more power through the rear wheels. This equates to more cornering gusto, tail-swinging and downright speed, resulting in the aforementioned tire squeals. ‘Plus' is never tested as this is reserved for when low-speed traction is necessary, as when driving in the mud.

As fast and stable as the WRX STI is, it is equally impressive in stopping itself dead in its tracks. STI gifted the car with much more bite, thanks to a performance braking system courtesy of Brembo. Even the antilock brakes, now dubbed Super Sports ABS, were retuned to provide a sportier feel and less obtrusion.

Though the STI will always be seen as the rally car for the road, Subaru has actually done a lot to make this car much friendlier for the everyday commute compared to the previous model.

First, despite the compact exterior dimensions, interior space is actually up, thanks to an increased wheelbase. Second, the body is more rigid, making the cabin more comfortable and isolated from road imperfections. Third, the new rear double wishbone setup not only improves ride and steering response, but also gives a flatter and more usable luggage area. No doubt, these attributes will make the WRX STI gain a bigger following.

But this may tick some fan boys off. Before, the WRX STI was a monster to drive, reserved for those who're willing to suffer a bit of spinal trauma for a slice of rally driving excitement. And if you're not too careful, it can bite you when you least expect it. But the all-new WRX STI is much easier to drive, and is more sophisticated but no less capable than before. This new iteration continues an illustrious lineage not only through its extraordinary performance, but also in giving the ultimate daily driving experience. 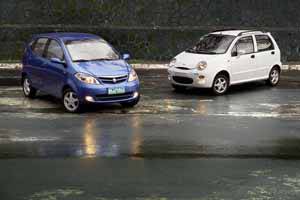 China crisis
View other articles about:
Recommended Videos
Read the Story →
This article originally appeared on Topgear.com. Minor edits have been made by the TopGear.com.ph editors.
Share:
Retake this Poll
Quiz Results
Share:
Take this Quiz Again
TGP Rating:
/20