Tuned for comfort over performance
by Andy Leuterio | Jan 3, 2013
CAR MODELS IN THIS ARTICLE 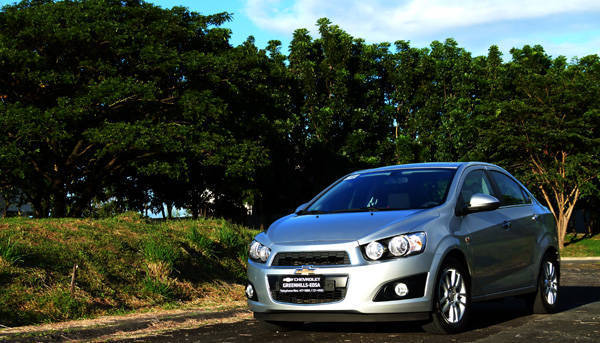 As if the B-segment market weren't crowded enough already, Chevrolet is attempting to make headway with its own subcompact, the fetchingly styled Sonic. With a thrifty 1.4-liter engine, a choice of five-speed stick or six-speed automatic transmission, and an impressive array of features, the Sonic--at least on paper--should be a serious contender against strong sellers like the refined Honda City, the spunky Ford Fiesta, the evergreen Toyota Vios, and the value-for-money Hyundai Accent. Does it have enough to make a lasting impression? Or is it best viewed as a nicely spec'd appliance on four wheels. The answer is somewhere in between. 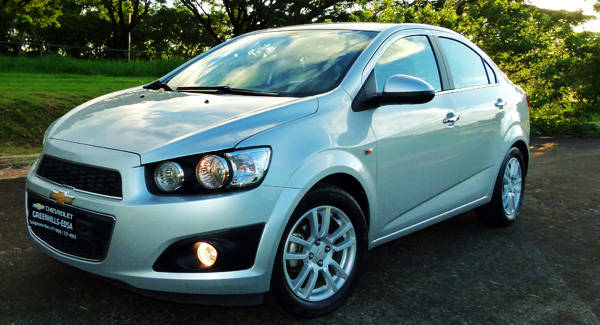 If only because it's a breath of fresh air, the Sonic stands out well enough. It shares some of the design themes from the bigger Cruze, like the sharp creases on the fenders and beltline, and the split grille. The most striking external feature is its headlamp design. The quad-bezel design is meant to evoke a motorcycle's, and it does look sporty and quite unique. Sixteen-inch, 55-series wheels give it a sporty stance that should have only a few buyers looking to change them for even sportier shoes. 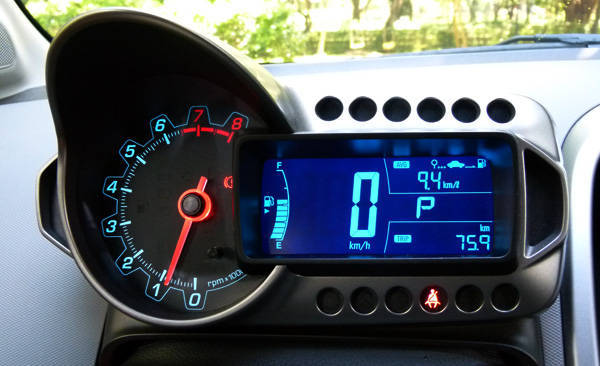 Similarly, the interior's most eye-catching feature is the LED gauge cluster, also meant to evoke a motorcycle's. I really couldn't see any practical benefit from the unit other than the oversized tachometer and digital speedometer making you more conscious of the speed. That instrument pod is lined by a row of idiot lights.

On a practical level, the Sonic continues Chevrolet's current penchant for creating as many storage spaces as possible. There are two pockets flanking the A/C vents atop the center stack; there are two over/under gloveboxes; there's a cardholder under the stereo controls; there's another cubbyhole in front of the shifter; and there exists a fair apportioning of cupholders. Still, the design integration is what makes the cabin such a pleasant place to be in. The plastics don't feel cheap, some nice silver accents liven up the cabin, and the three-spoke steering wheel feels hefty and nice to hold. And I just love the outboard A/C vents; they look like aircraft engines. 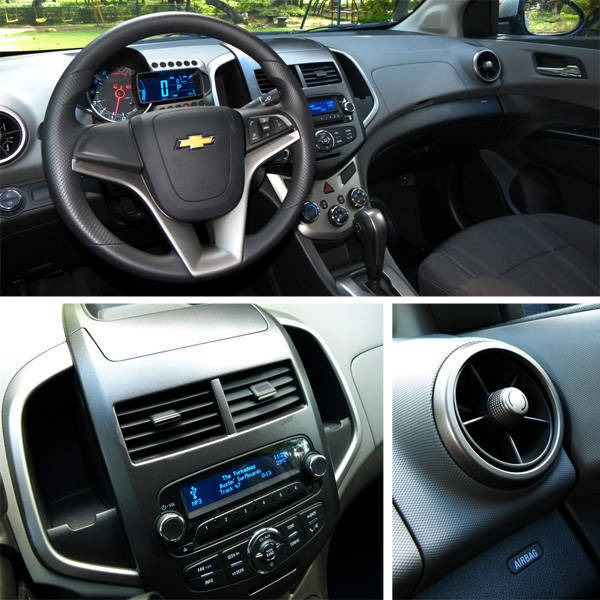 The US-market Sonics get a 138hp, 1.4-liter turbo option that delivers spritely performance. The Philippine market only gets a naturally aspirated, 1.4-liter unit that relies on twin cams and 16 valves to deliver an unremarkable 99hp. Acceleration is predictably tepid despite the automatic's best efforts to make the most of the available power. The engine gives up at least 20hp to the 1.5-liter versions of the City, the Accent and the 1.6-liter Fiesta, and you can feel this deficit every time you press the throttle to the firewall. While it's not the slowest car you'll ever come across, it takes some planning to overtake on two-lane roads and you'll want to keep the momentum going.

Those who don't mind shifting for themselves should consider the five-speed manual. The six-speed automatic is smooth and responsive when left to do its job, but the side-mounted "+/-" button for toggling shifts is annoying to use. Why couldn't they have put a normal shift gate down there? Deep prodding of the accelerator to get you going will penalize you in fuel consumption. My fuel economy figures hovered in the range of 8-9km/L in the city. Steady highway driving edges the figure in the 12-13km/L range.

Finally, the 1.4 is reasonably quiet and smooth, but no Honda. It revs easily up to 4,000rpm, but after that it begins to boom. 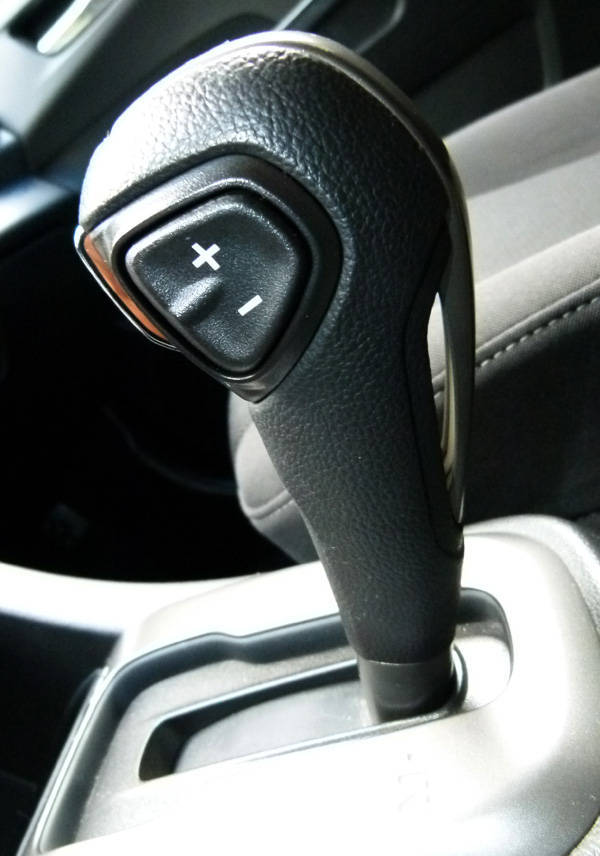 There are no surprises--pleasant or otherwise--with the Sonic's handling. Using front struts and a rear torsion beam suspension, the Sonic is tuned for comfort over performance. The body leans in the corners and the front end understeers, but the nice thing about that rear setup is you can get a "poor man's drift" if you go fast (and crazy) enough in a corner since it's not quite as planted to the road as a fully independent system.

Still, like the Cruze and the Orlando, long highway drives are the the Sonic's forte. The suspension seems to have a fairly long travel and good damping for soaking up bumps and smoothening out the road. It's a nice, relaxing "big car" feel. If I had to drive somewhere far and had to use a subcompact, the Sonic would be a solid choice. And just like the Cruze and the Orlando, the structural stiffness of the Sonic feels almost European. Slam the door closed and you get a solid "thump." On bumpy roads, there's very little flex to put you off. 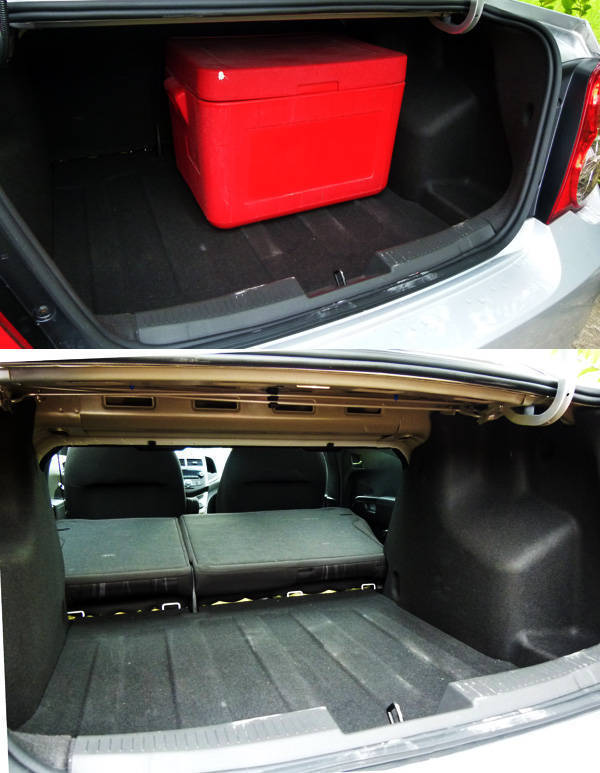 Now, we come to Chevrolet's "value-added" strategy: Pile everything possible into the car to get you over that anemic engine. Whether you choose manual or automatic, there's only one specification level for the Sonic. Standard equipment includes front and rear foglamps, a driver armrest, 60/40-split folding rear seatback, central locking with keyless entry/alarm/trunklid release, integrated stereo with auxiliary and USB ports, Bluetooth connectivity, rear window defogger, and steering wheel-mounted audio and Bluetooth controls. The trunk is pretty large for a small car as it can easily swallow a cooler and several more bags while still hiding a full-size spare tire underneath.

But wait! There's more. Safety equipment comes in the form of standard ABS for the disc/drum brakes, engine immobilizer, and driver and passenger airbags. The question savvy car shoppers will ask, of course, is: "What other cars out there are in the Sonic's P778,888 to P828,888 price bracket?" And the answer, unfortunately, is practically every other B-segment car, too.

While the Sonic won't appeal to lead-footed drivers, it should be worth a look for those who'd like to try something different from the teeming Hondas, Toyotas and Hyundais on the road right now. The styling is handsome enough that it shouldn't look outdated in a few years. It is well-equipped to fulfill the needs of most buyers who don't want to accessorize or upgrade later on, and the ride comfort gives it an edge for those who see themselves driving long distances.

Review: Kia Rio 1.4 5-door
View other articles about:
Read the Story →
This article originally appeared on Topgear.com. Minor edits have been made by the TopGear.com.ph editors.
Share:
Retake this Poll
Quiz Results
Share:
Take this Quiz Again
TGP Rating:
/20