A luxurious experience for half the cost
by Carlo Chungunco | Aug 12, 2015
Toyota Corolla Articles
Feature Article 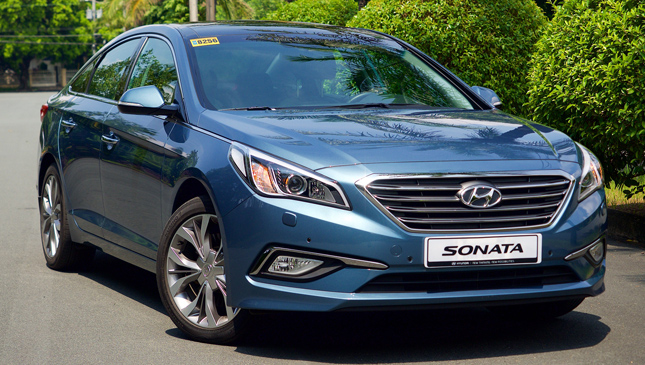 The midsize sedan market is one of the more competitive segments in the country. The Toyota Camry has so far held the top spot, but a lot of would-be usurpers have been trying to take the crown away. Hyundai’s strongest argument to date is its all-new Sonata. Can it live up to the strong (albeit young) legacy left behind by the previous generation? We recently got one for a weekend to find out. 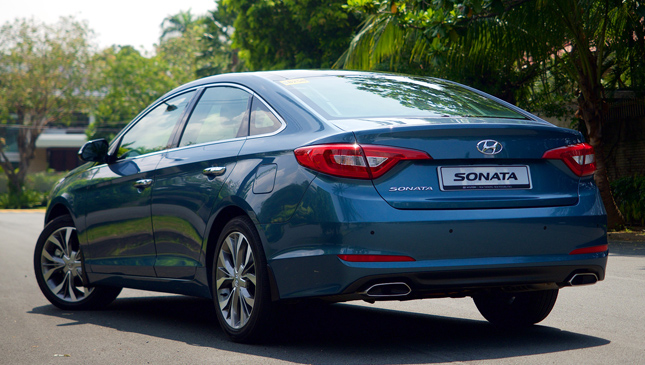 Our first thought when we saw it in our dark office basement was: "Where is the Sonata? And why is there an Audi S7 in that slot?" This Sonata is the most Euro-centric design from Hyundai yet, with Peter Schreyer's Audi influence shining through. It cuts shallowly from the roof in what seems like a straight line to the boot, which ends in a small lip spoiler that adds a touch of edginess to the rear. The intricate and symmetrical pattern formed by the Sonata's tail lamps and exhaust tips draws you in, as the hexagonal design is unlike anything we have seen from typical Asian-penned vehicles.

From the front, the LED headlamps have LED running lights that accentuate the top of the headlamp cluster, and continue onto a chrome trim piece that runs along the body of the car, meeting with the termination of the roofline and the C-pillars. The wheels are gorgeous and possess a completely unique pattern that wouldn't be out of place in a luxury car.

Overall, the design is stunning, with geometric shapes highlighted by the gently and shallowly sloping roof of the vehicle. If we must nitpick, the grille is a generic horizontal slat-type affair and is thus completely forgettable. Lighting is a mixed bag as well, as the fog lamps have a yellow tinge that tends to look a bit cheap, especially when lit together with the white light emanating from the LED headlamps. 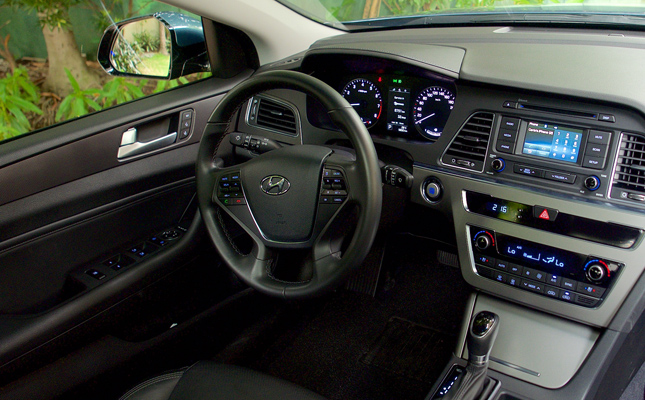 The first thing that greets you is, well, the car literally greeting you. As you approach it with the smart key, the exterior lights turn on and puddle lamps mounted on the side mirrors lead you inside. When you start the engine, the Sonata computer welcomes you with a chime akin to a '90s Nokia mobile phone, as the seat electrically adjusts to the position it was last left in (the seat moves away when you turn the car off for easy egress). When lit, the cabin is awash with stylishly uniform blue-and-white lighting.

The interior is a great place to spend time in. The seats are infinitely adjustable, with the driver benefiting from a stellar power lumbar adjustment that can adapt to any height or build. These settings can then be recorded by the seat memory in one of two memory slots, and recalled upon at any moment. Outside of the luxury car segment, this is the only vehicle we can think of that also saves the settings for the side mirrors.

The leather seems nice to the touch, especially on the steering wheel and the shift lever. All the parts we can lay our hands on definitely feel premium, but the soft-touch interior bits are only let down by certain cheap-feeling plastic pieces mostly found in and around the A/C controls and on the indicator stalks. These plastics detract from what could have been a great interior. One great addition to the Sonata is the inclusion of a panoramic sunroof that reaches all the way to the rear seats.

NVH insulation is spectacular, closer to a luxury car than anything else in its class. The first time we tried the horn, we were worried that it was broken, only to realize upon cracking open the window that it was just the awesome sound insulation muffling the sound of the horn blaring. Unfortunately, it was this extreme quietness that exacerbated and amplified a slight squeak we heard coming from the ceiling. The touchscreen audio system has CD, MP3 and Bluetooth playback capabilities, but is paired with mediocre speakers that lack the oomph available with more premium systems. 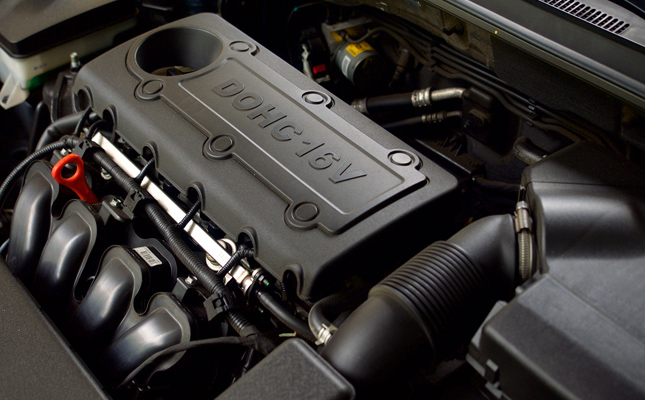 The Sonata's combination of a 2.4-liter four-cylinder engine (176hp and 228Nm) and six-speed automatic transmission is--for lack of a better term--adequate. Power comes in gradually and linearly up to the 7,000rpm redline, but it never feels what you would call "sprightly." It doesn't seem slow, but it doesn't seem fast either--it's just right. A larger engine (or the more powerful GDi variant) wouldn't hurt, though.

The Sonata averaged around 5.2km/L while it was with us, although that does come with the caveat that it spent most of its time in heavy traffic (what's new?), with only a short highway stint to offset the fuel-guzzling gridlocks we tackled. We're sure that had traffic been more normal--and sans rain--the fuel economy would have fared better.

The car benefits from a drive mode select switch located below the shift lever. It allows the driver to select Eco, Normal and Sport modes for the car, with Sport making the engine hold the revs all the way to the redline even in automatic operation. 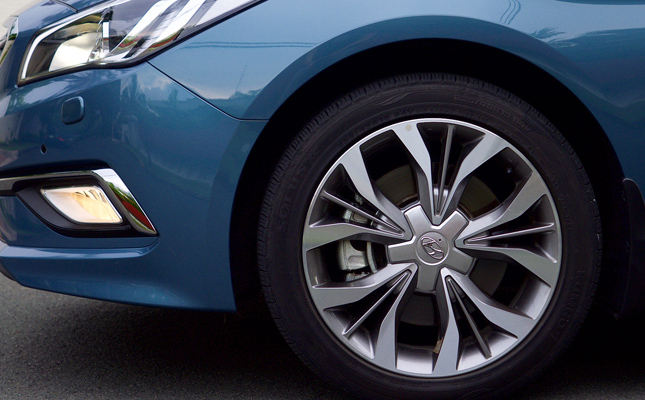 Driving around in Normal mode, the Sonata handles well. It absorbs the worst that EDSA has to offer, and glides over even the worst potholes (more like craters). The suspension never felt like it was upset as we cruised along broken Metro Manila streets.

During cornering, we found that the electric steering can feel a bit light, but switching the mode to Sport firms it up significantly. The added precision of the weightier steering helps during cornering, while the suspension prevents too much body roll, allowing the midsize sedan to corner surprisingly well for its size. 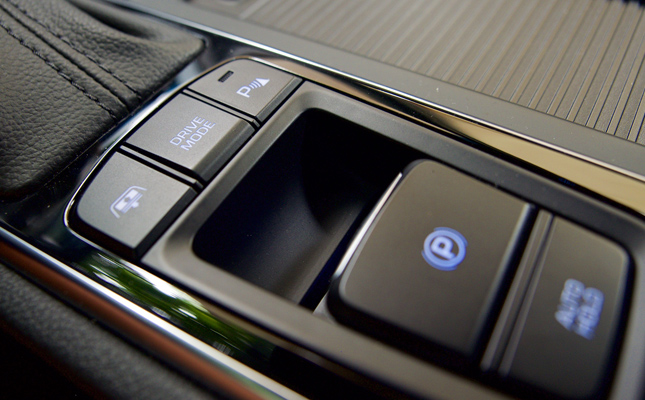 It looks like Hyundai was targeting the luxury market just with the list of features included in the car. The headlamps and the wipers are both automatic. There is a backing-up camera to assist you when parking, and when you shift the car into reverse, the side mirrors dip down automatically so that you can see the curbs on the side of the car. As you are backing up out of a parking slot, there is a system called Rear Cross-Traffic Alert that will sound off when it senses an oncoming car.

When you're on the move, the Sonata is equipped with a Blind Spot Detection System on the side mirrors to warn you if a car is in your blind spot. Furthermore, if you hit the turn signal while the system is active, the car will emit an audible warning to stop you from changing lanes. When the car comes to a complete stop, the brakes engage and you can remove your foot from holding down the brake pedal even if the car is in Drive. This is especially handy in stop-and-go traffic.

The front seats are also equipped with seat air-conditioning and heating. There’s even an automatic defogging system that detects if the windshield is fogged up, then activates to remove moisture and clean up the glass.

The high-resolution screen within the gauge cluster has some of the best animation we have ever seen in a car, luxury or otherwise. Although at certain angles, the gauges can get washed out by reflections from the steering column.

We were genuinely and pleasantly surprised that a vehicle in this price range would have features that could easily rival cars costing twice as much. The Sonata is a handsome and well-equipped midsize sedan that, save for a few niggles here and there with regard to fit and finish, we would heartily recommend to anyone looking for a luxury experience for half the cost. 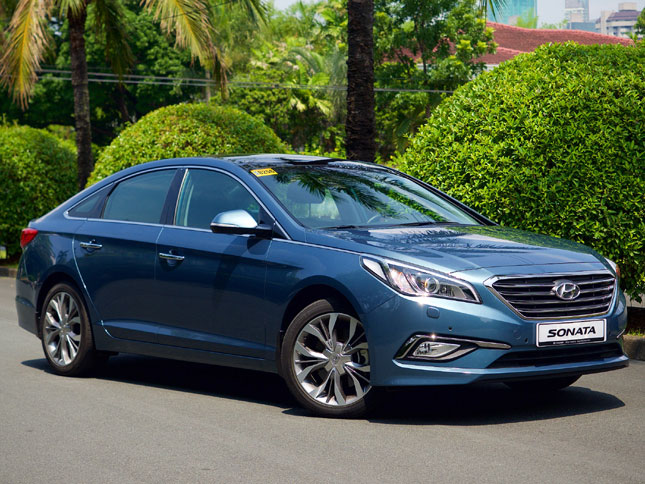 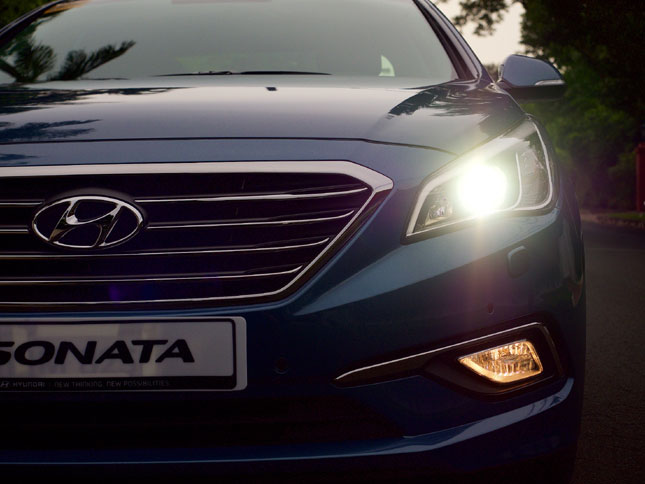 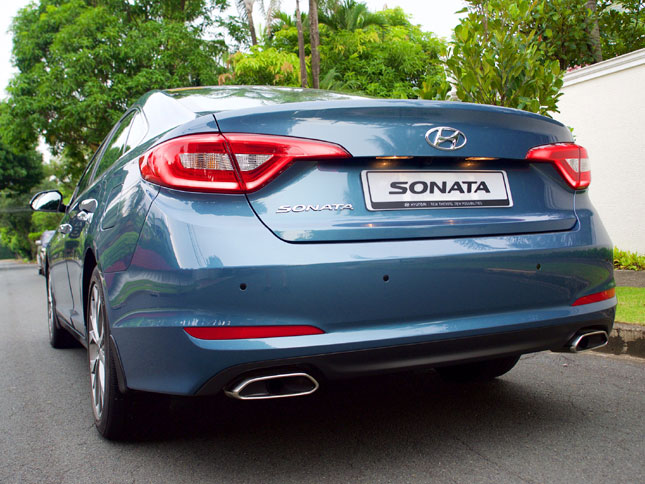 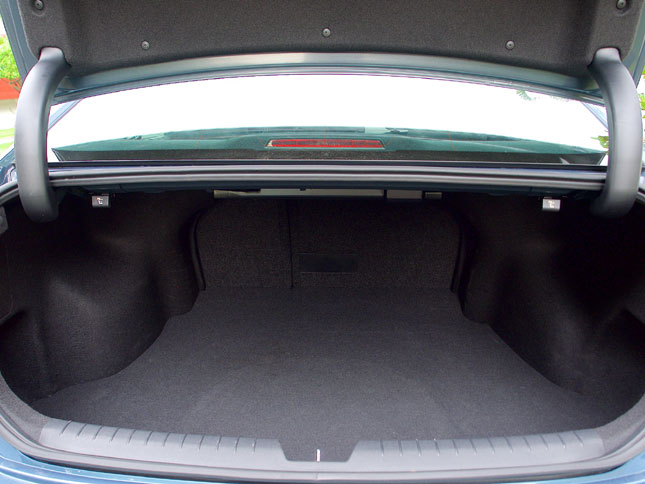 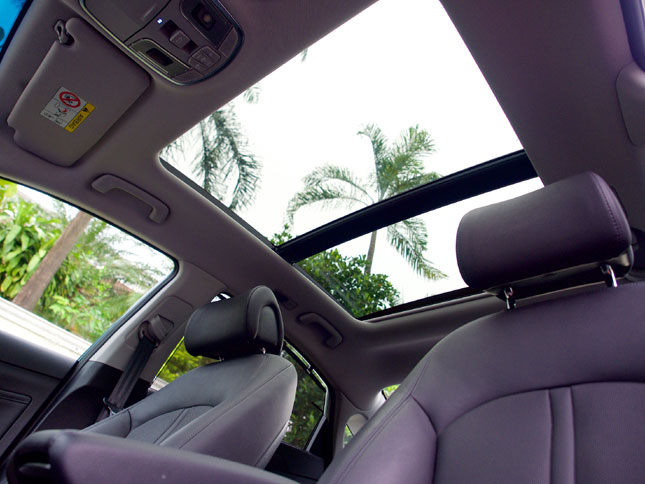 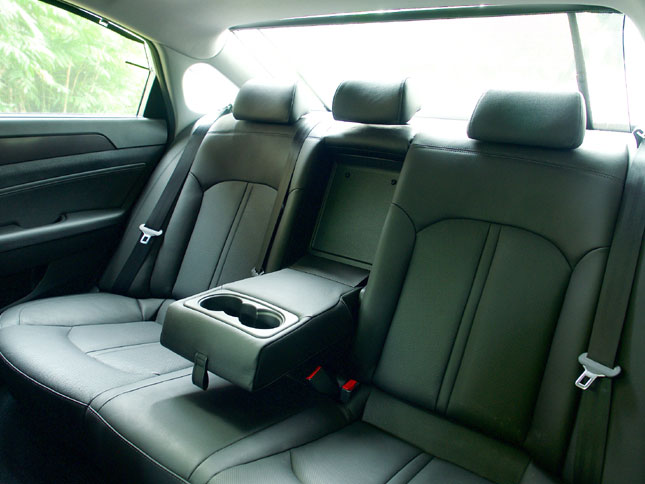 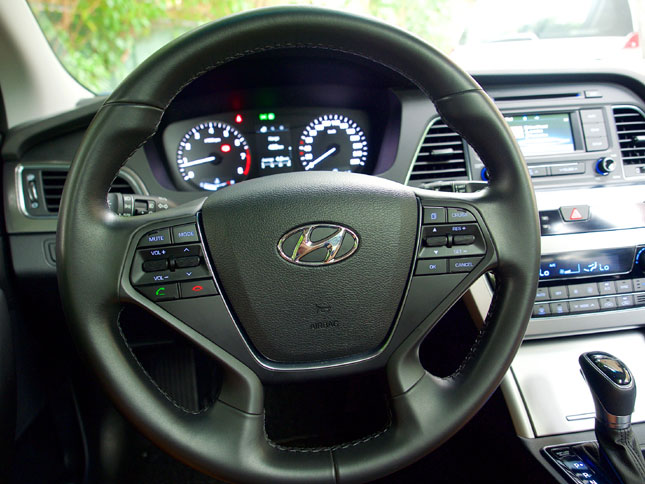 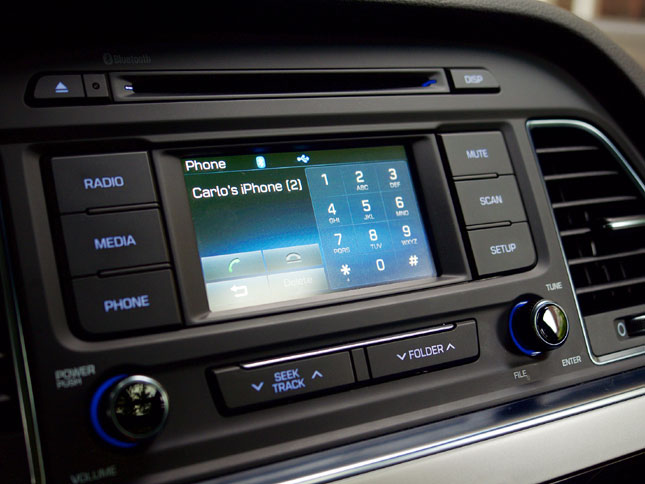 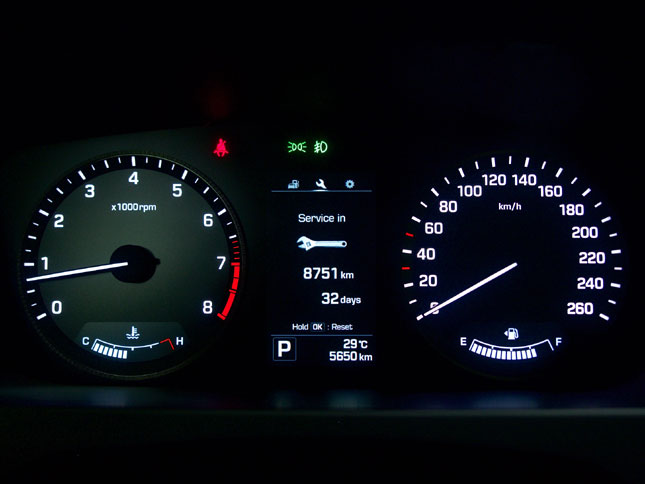 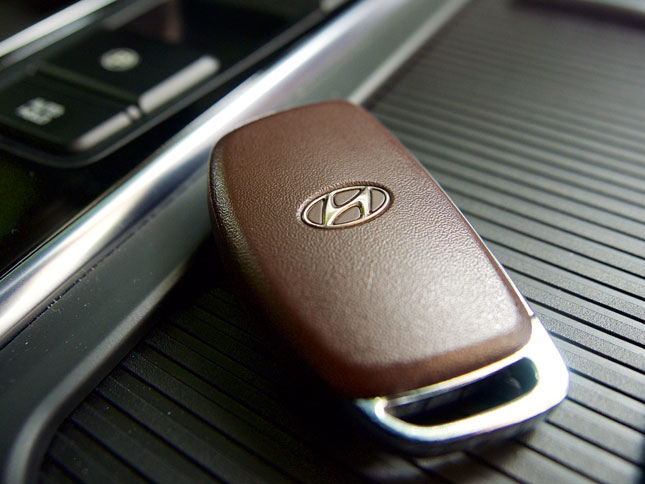 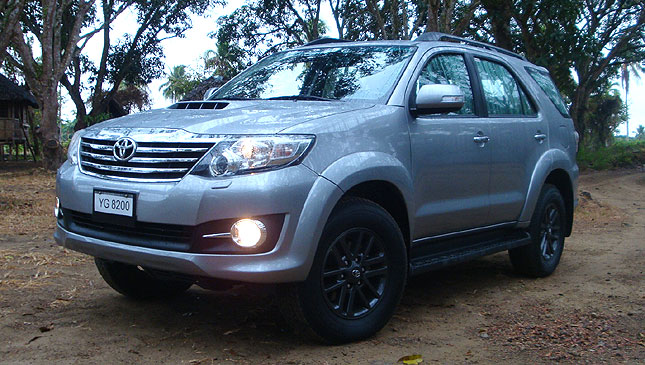