Is the power deficit on paper inconsequential?
by Niky Tamayo | Oct 17, 2014
CAR BRANDS IN THIS ARTICLE 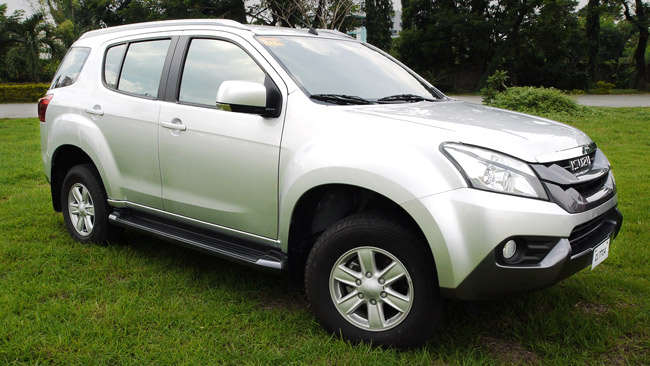 If there's one thing people love to pick on Isuzu for, it's keeping cars well past their sell-by date. The Crosswind, as a prime example, has not undergone a major mechanical change since before the turn of the millennium. There are teenagers learning to drive who are younger than the venerable workhorse.

That's not always a bad thing. Isuzu trucks are valued as workhorses due to their robust nature and the easy availability of parts. But the local market is maturing fast, and durability is no longer enough. What's needed is a dash of style and sophistication. 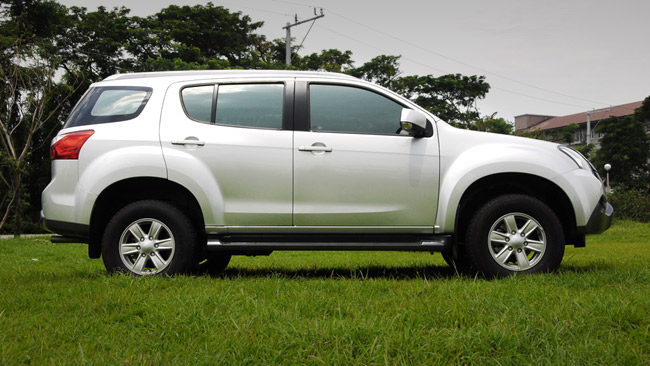 Based on the Chevrolet Trailblazer, the MU-X shares many of the same body lines. The Japanese truckmaker, however, has added a dash of muscle with pumped-out fender flares. And the twin-bar grille and insectoid headlights are an obvious throwback to the previous-generation D-Max.

There's little comparison between this car and the huge old Alterra. This is a considerably more compact, more athletic truck. Standard foglights, roof-rail mounts and alloy wheels round out the package, though the 16-inch wheels seem a bit lost under the big fenders. 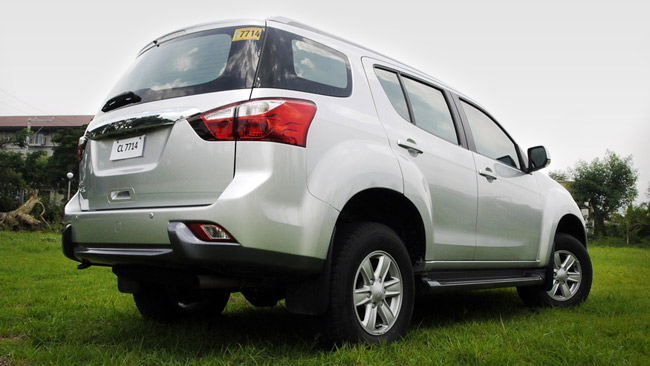 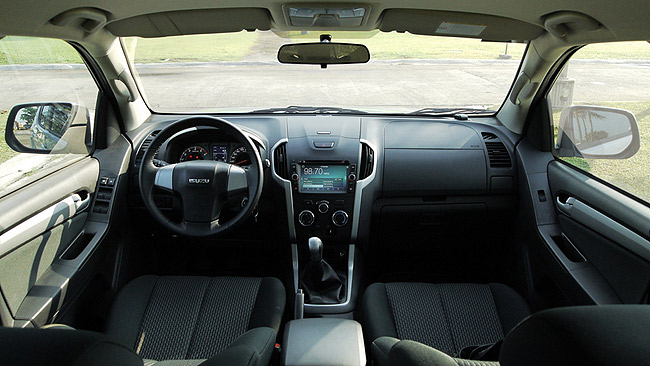 The MU-X might not be Alterra-sized on the outside, but thanks to the Trailblazer connection, this is perhaps the roomiest truck in its class right now. Trailblazer owners will experience déjà vu, as the cars share dashboards, seats and control layouts. The Isuzu's instrument cluster lacks some of the digital readout options of the Chevy, but the simple chrome-ringed gauges look classier.

The cabin's black-on-black theme, on the other hand, gives it a more rugged and less urbane feel. Hauling industrial-sized loads like, say, four dozen muddy traffic cones, is less of a hassle. It would be nice, however, if the third-row seats folded into the floor. 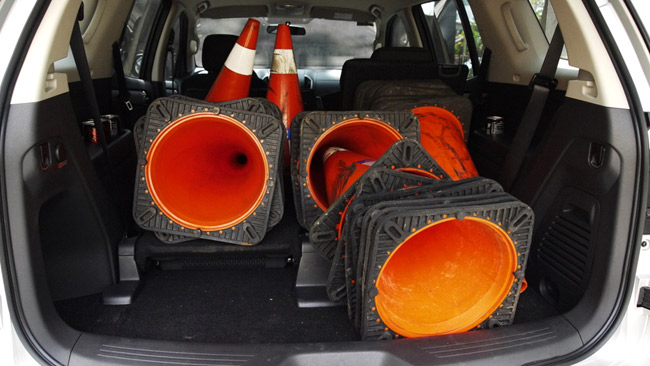 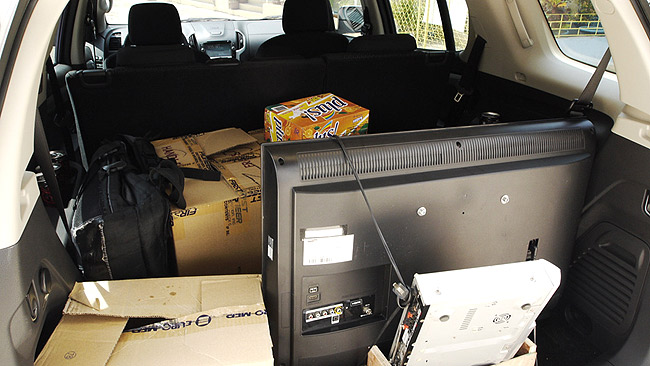 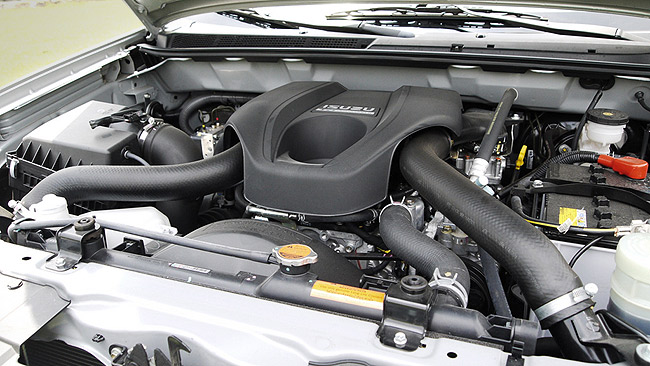 Isuzu's new 4JK1-TC engine is built for long-term use, with an understressed design and maintenance-free timing chains. It's incredibly quiet at idle, and feels much peppier than the 134hp power figure suggests. And this being an Isuzu, the clutch and the gearshift are delightfully light and easy to use compared to the clunky, heavyweight items on the competition.

Sadly, it lacks some of that lazy, low-down torque of the 3.0-liter powerplant, and can sound a bit strained when lugged. But in terms of economy, it's a gem. Despite the lack of a sixth gear, it achieves 19-20km/L at 80kph on the highway. In two hours of rainy rush-hour traffic, slogging from Caloocan to Makati, we got a mind-boggling 9.5km/L. 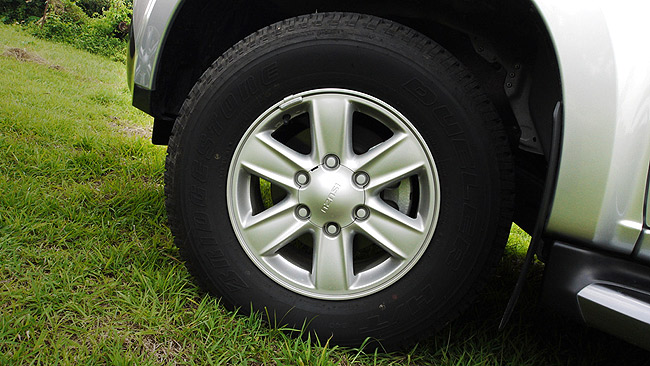 As expected, the new MU-X handles much better than the old Alterra. Big mirrors and glass, as well as a lower nose than the Trailblazer, make it easier to drive in tight spots and parking lots than you'd think.

Isuzu has chosen to go its own way with suspension tuning. Both 4x2 and 4x4 variants are somewhat softer than their Trailblazer counterparts.

The 4x4, with its lower-profile 255/65 R17 tires, gets things just right, but the 4x2's 245/70 R16 Bridgestone Dueler HT rubber feels a bit wayward on the highway when inflated to the suggested 29psi. We ran the car at 32psi for a little more confidence at speed, but some extra shock damping wouldn't go amiss here. 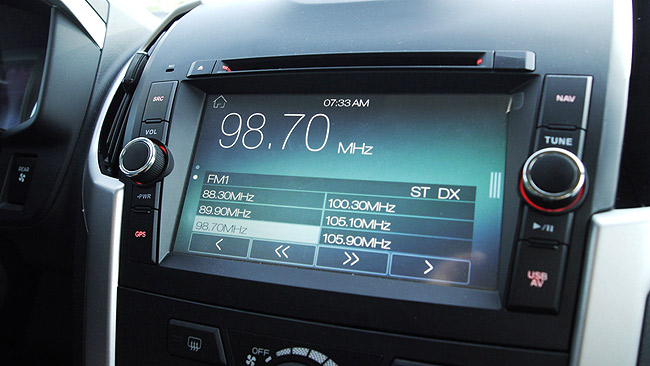 Our midrange MU-X gets lovely ceiling-mounted rear air-conditioning, 16-inch alloy wheels, fog lamps, keyless entry and a touchscreen head unit. The sound quality is generally good, but the equalizer settings are fiddly, and the system lacks bass. The blue-themed display is actually better-looking than the "techno" display on the rear-camera equipped 4x4 variant.

Of course, the 4x4's electronic climate control and leather make it feel much more special, and the 17-inch wheels give better performance, comfort and looks. The base MU-X, on the other hand, still gets 16-inch wheels and a touchscreen, but drops the multimode vent controls, fog lamps and color-keyed accessories.

One might question whether the Isuzu MU-X is a good buy over the competition, given the power deficit. For those who might need extra affirmation of their manhood every time they pull out to overtake, maybe not. But for people who appreciate a genuinely good, incredibly spacious SUV with great fuel economy and low running costs, the MU-X it is.

The 4x4 variant is wonderful, but the automatic transmission robs you of both power and economy. But with a manual transmission, this new Isuzu fits the bill perfectly. Unlike other stick-shift-equipped SUVs, the MU-X makes being practical practically painless.

Review: Suzuki Swift 1.2 AT
View other articles about:
Read the Story →
This article originally appeared on Topgear.com. Minor edits have been made by the TopGear.com.ph editors.
Share:
Retake this Poll
Quiz Results
Share:
Take this Quiz Again
TGP Rating:
/20