A distinctive personality that oozes an image of success
by Andy Leuterio | May 23, 2013
CAR MODELS IN THIS ARTICLE 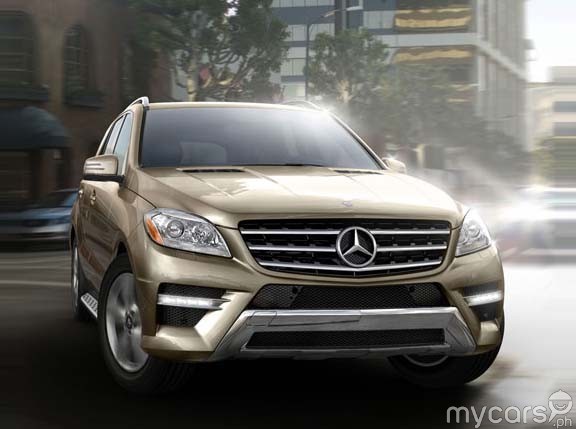 Possibly the best thing about premium SUVs is that the manufacturer doesn\'t have to cut a few corners in the name of profitability. On a mainstream SUV, it\'s kind of expected that you\'ll have to put up with little things like rough plastics in the hidden areas, a little power deficit perhaps, and liberal sharing of parts with the other models in the lineup. To top it all off, you have to deal with the knowledge that once enough units have hit the road, you\'re driving something exactly the same as your neighbor\'s.

Not so with premium SUVs, which are held to a higher standard. While not exotic by nature, they\'re priced in such a way that only a relative few can have them. And the moment you park one in your garage, chances are your equally wealthy neighbor will opt for another brand. Ah, the problems of the rich. This latest iteration of the Mercedes-Benz ML-Class comes with a sticker price of P6,480,000. Here\'s what that amount buys you.

Forget the homely, loaf-shaped first-generation ML that screamed \"soccer mom\" or even the manlier second generation. This third-generation model--especially with the AMG bodykit--oozes confidence and a bit of bravado with taut character lines, scalloped door panels, sharp angles, and a tasteful sprinkling of chrome and LEDs. Especially in the test unit\'s gunmetal gray color and adorned in front by that pizza-sized tri-star emblem, it is a shape that magically clears a path among middle-class sedans and proletariat PUVs on EDSA, and has security guards hurriedly raising the gate for you (even if you don\'t have a resident\'s sticker since it\'s a test unit). It\'s a very distinctive shape that sets it apart from all other SUVs without looking tacky or overwrought. And that\'s always a good thing.

In the very best tradition of a Merc, the interior has an old-school feel that\'s modernized by the latest in driver aids and entertainment systems. Maroon leather upholstery constrasts nicely with the dark-gray plastic used for the cabin. Eucalyptus wood is strategically used on the dashboard, door panel inserts, and steering wheel. The center stack is mildly confusing at first with so many buttons and dials for the climate control, info system and stereo, but everything gets sorted out after a few drives. While the moonroof probably won\'t be opened many times, sliding the cover back to reveal the glass roof lets the sunlight in to really brighten up the cabin. One gets the feeling of being in an exclusive men\'s club, minus the reek of tobacco.

There is ample space for all passengers, including the middle rear-seat passenger. While the rear cargo area is already big enough for several golf bags or coolers, tumbling the rear-seat bottom and folding down the seatback creates a long, flat load floor that virtually turns the ML into a small van.

As the badge denotes, power is provided by a 3.0-liter diesel V6 rated at 265hp and a hefty 620Nm of torque between 1,600rpm and 2,400rpm. You could probably stick that in a boat and pull that Chinese fishing boat out of Tubbataha. Mated to a seven-speed automatic transmission, the ML engine goes about its business with typical, Teutonic urgency and then some. Even saddled with the extra weight and friction of all-wheel drive, the Merc accelerates so smoothly and quickly that it\'s best to keep an eye on the speedometer or else you\'ll be way over the speed limit before you realize it. My city/highway driving averaged 10-11km/L. Real Benz owners probably don\'t mind spending so much for fuel like the average SUV owner does, but it\'s nice to know how far you can stretch the ML\'s fuel tank on long road trips.

The diesel is also remarkably quiet, and at typical cruising speeds the noise is just a faint rumble and the vibration virtually nil. Although the transmission comes with paddle shifters, the computer does such a swell job managing all those cogs that the only time you\'ll ever use them is if you ever have to go through a set of tight switchbacks quickly. The AWD system works transparently and aids in confidence on less-than-ideal road surfaces. The full-time system puts more power to the rear wheels in normal driving to give the big SUV the feel of a rear-wheel-drive vehicle, and it seamlessly redirects torque as needed among all four wheels on slippery surfaces. An off-road switch on the dash enables better low-speed traction, altering engine, transmission and brake settings for the rare event during which you may actually have to get down and dirty.

As big as this Benz feels, it manages to drive like a smaller vehicle, thanks to excellent straight-line stability, reasonably quick turn-in, and a disciplined suspension that\'s on the firm side for an SUV. Loyal Mercedes-Benz customers will liken the ride to any of the marque\'s sedans, albeit with a taller ride height. The overall feeling is dignified and implacable rather than sporty like the BMW X5. Of course, those who want the big, bad Merc package will want to consider the ML63 AMG. Now, that\'s one BAMF Merc.

Where to start? The Merc has the expected complement of luxe items like premium leather and wood trim, auto climate control, and power-everything. Everybody--and I mean everybody--will love the Harman Kardon multimedia system with its outstanding sound quality that turns even the most ingratiating pop songs into concert-quality performances. My personal favorites are the gorgeous, wood-rimmed steering wheel that\'s such a pleasure to hold, and the reverse camera, which also shows the orientation of the front wheels relative to where the rear end is pointing. It\'s hit-and-miss for the engine start/stop feature, which is designed to save fuel by killing the engine in stop-and-go traffic. The engine fires up the moment you lift off the brake, but the slight vibration of the diesel engine on start-up detracts from the luxury feel.

Standard safety kit includes brake assist with ABS, electronic stability program, and blind spot detection. Depending on how far you want to go down the equipment checklist, you can also spec the Merc with an intelligent light system, and Pre-Safe occupant system that tightens the seatbelts and closes the windows in a fraction of a second. It\'s also fitted with airbags for the front, knees, sides, and windows. The five-spoke light-alloy wheels, and racy front and rear aprons are part of the AMG Exterior Sports package.

The admission price may be steep, but the big Benz looks, drives and feels like it\'s worth every centavo. There are many, many SUVs out there that are a third of the price tag and may offer more space, versatility or bang for the buck, but that just adds to the snooty appeal of the ML. It\'s playing in a rarefied field of premium SUVs with the likes of the Porsche Cayenne and the Audi Q7, and carves out a distinctive personality that oozes a dignified image of success. The fact that it can leave a lot of cheaper cars, SUVs and trucks in its dust while being relatively thrifty at the pump is just icing on the cake.