Your mother should know

They say this is for soccer moms. Jacqueline Dyer, a certified mother of one, brings it on a manly trip to see for herself
Feb 2, 2009
CAR BRANDS IN THIS ARTICLE 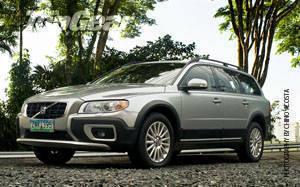 IN GIVING me this gig, the Chief said, "The Volvo XC70 is the modern soccer mom's ride," hoping that an appeal to my maternal instinct would make me accept. But my nine-year-old boy doesn't play soccer. And I don't do carpool. So this poorly disguised selling point landed at my feet like a successfully dodged bouquet toss.

However, test-driving a luxury car - which I can afford only if I swap freelance writing for congressman-mistressing - did have its appeal. And after two days in the Swede's company, I was ready to consider a career shift.

The XC70 has been called many names - "crossover vehicle," "off-roader-flavored wagon," "family adventure vehicle," "SUV lite," "sport-utility estate," and, of course, by its maker's own coinage, "cross-country all-wheel drive." So what makes this wagon part-luxury ride, part-mommy mobile, and part-workhorse?

First of all, there's the size.

There was enough room for a cozy five-girl, five-day road trip, the boot filled with overnight bags crammed with ten days' worth of clothes, kikay kits, and hair planchas. For this particular overnight test drive, though, it was just me behind the wheel and the better half riding shotgun, with the second-row backrests facedown to accommodate two mountain bikes (no disassembly needed!) and an ice chest that could fit 12 six-packs.

But with this great size came none of the heft. I've heard friends with giant SUVs complain about hauling heavy ass through EDSA - how laborious it was for their barge-like transports to evade a maniacal taxi or weave ahead of a geriatric-driven tricycle. Parking for them was as painful as squeezing birthing hips into a snazzy pair of skinny jeans.

The XC70, despite its emulated SUV traits, was almost as nimble as a feisty pint-sized sedan, snaking in and out of corners and car sandwiches on command with only the most negligible nano-second delay. For something with considerable weight onboard, it didn't at all feel heavy on the road. The drive from Manila to Tagaytay's Discover Suites was a comfy one.

I tire easily on long road trips, especially those peppered with sporadic bouts of traffic jams - like those en route to the deep south. But the seat's lumbar support made it feel like I was driving from an ergonomic La-Z-Boy. And unlike testosterone-ridden machines built purely for rugged terrain, the XC70's four-wheel-drive system eased through rough roads without my having to flick a switch, and gave me full control when I trod on gravel and mud-slushed grass in and around Tagaytay. 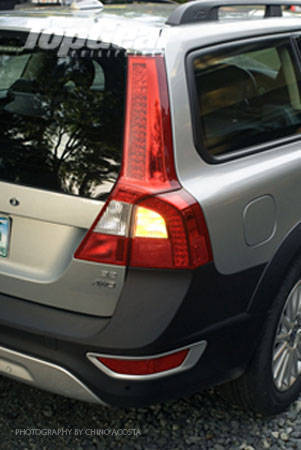 Then, there's the height.

The XC70's higher ground clearance meant that I'd be spared the male-driver WTF stare that I used to get whenever the bumper of my own rickety sedan would scrape pavement while negotiating a steep incline. I did relish the absence of "the pinball machine," which is what I call road debris clattering in my undercarriage. With the XC70's height and sound isolation, the bustling scene of espasol hawkers and Santacruzan onlookers outside played like a Lino Brocka film on mute.

Those extra inches off the ground didn't seem to exceed the need for safe speeding, though. I didn't feel the slightest waddle in my sudden turns at 120kph.

Inside, there was easy-enough access to the knobs, gauges and controls, as if this were a big car made for a little lady. Multiple sound alerts go off naggingly in true Jewish mother form over the littlest infractions - backing up a wee too close to the parking wall, not being strapped to the seats, or getting lulled on a long smooth road into tailing the car ahead a tad too closely. Of course, you can turn off the driver alert controls, but then that would be like paying for a cheeseburger and leaving out the cheese. A Volvo simply isn't one without the safety overkill.

But despite my slight annoyance over every little beep betraying the fact that I wasn't the most cautious of drivers, I was happy to see airbags also tucked unobtrusively at the sides of the car in addition to those hidden in the usual anterior part of the cabin. Volvo also claims that these side airbags extend far and low enough to protect kids riding at the back.

The Volvo brochure mentioned an anti-intruder alert via an interior heartbeat sensor, but I wasn't about to leave the pricey car unlocked in the middle of a parking lot in carnap-infamous Quezon City as bait just to see if it worked.

I did get around to testing two safety highlights: the Hill Descent Control and the power-operated tailgate force sensor. I headed out to Talisay where there was a steep, long, narrow, and just-rained-on hillside that spiraled down to the banks of Taal Lake at an incline reminiscent of a roller coaster before the plunge. With the push of the HDC button, I kept my hands firmly on the wheel then slowly lifted my feet off the gas and brake pedals. And yes, the car did roll, and sometimes ebbed and flowed, steadily and with nary a jerk or skid, auto-piloting safely until we reached level ground. The moment called for a celebratory cold drink. And so I popped the tailgate open, and put my hand on a part of the trunk that ensured I could never again pick my nose with two hands if the purported tailgate force sensor didn't come through. Which it did, bless those Swedes.

ADVERTISEMENT - CONTINUE READING BELOW ↓
The Chief was right: The XC70 is the modern soccer mom's van. And so what? Some of us don't really give a hoot about equal opportunity on a genderless highway because we've got places to go and no time for a pissing contest. Some of us just want to get from point A to B with as much capability as the next off-roader - without having to waste perfectly good underwear by bra-burning every damn step of the way.
Read Next