Great stuff for armchair racers out there: Codemasters has released more details on this year\'s installment of its Formula 1 simulation series--in particular, that long-gone liveries, legendary drivers, and historic racetracks are included in the mix. F1 2013 comes in two editions for PS3, Xbox 360 and Windows PC.

Aside from featuring all the current cars, competitors and circuits, F1 2013: Standard Edition has a \"Classic 1980s Content\" package composed of: five of the era\'s cars from Ferrari, Williams and Lotus; 10 drivers, including Nigel Mansell, Mario Andretti, Emerson Fittipaldi and Gerhard Berger; and the venues Circuito de Jerez (Spanish GP) and Brands Hatch (British GP). Through the vintage single-seaters, players can experience \"the different handling characteristics\" and feel \"the evolution of technology over the years\" as an \"eye-opening contrast to the cars simulated from the 2013 season.\"

F1 2013: Classic Edition, meanwhile, adds the following \"Classic 1990s Content\": six cars from Ferrari and Williams; seven drivers, including David Coulthard, Eddie Irvine, Alain Prost and Jacques Villeneuve; and the Imola (San Marino GP) and Estoril (Portugese GP) tracks. It\'s a \"limited-edition, premium package,\" meaning it\'s more expensive than the standard one. But not to worry: The \'90s cars, drivers and tracks will be available as downloadable content for standard-edition owners \"later on in the year.\"

Want more info? Other gameplay improvements are an expanded Young Driver Test, mid-session saves, the return of Single Player Championship Mode, and full RaceNet integration. We\'ve also seen sample gameplay of the classic content on YouTube, and the rendering has this awesome retro vibe, complete with over-the-shoulder cockpit shots, for dramatic effect. As for the current era, we\'re not sure if exploding Pirelli tires come as standard. Best to plan for earlier and more pit stops when you\'re working out your strategy, just in case. And if you\'re racing as the Red Bull number one, don\'t forget: \"Multi-21, Seb, multi-21.\"

Still more info? Well, we don\'t want to be the bearer of bad news, but the great Ayrton Senna won\'t be featured in the game, supposedly due to licensing issues. Also, no word yet on a CGI version of Michael Schumacher--but if ever he and the F310B do make it in and you decide to relive the 1997 championship decider (since Villeneuve and, presumably, his FW19 are also in the game), just be prepared for the repercussions.

If you\'re viewing this on a mobile device and can\'t see the video, please click here. 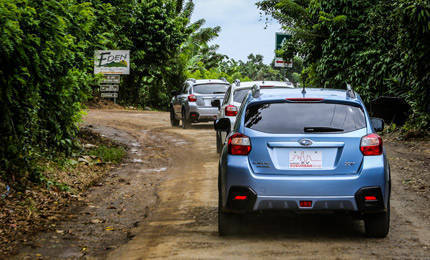 The best places to drive a Subaru XV in Davao City
View other articles about:
Read the Story →
This article originally appeared on Topgear.com. Minor edits have been made by the TopGear.com.ph editors.
Share:
Retake this Poll
Quiz Results
Share:
Take this Quiz Again
TGP Rating:
/20