If you're like me who fervently collects the 1:55 die-cast models of the characters from the Pixar animation Cars, you know how frustrating--and expensive--the experience can be. You see, the maker of the die-cast line, Mattel, has this habit of releasing exclusive characters bundled with repeat ones. And so you're left with no choice but to purchase box sets that contain pieces you already have, just so you can get your hands on that elusive character that isn't available as a single release.

Today, I already have 181 pieces from the first Cars line--not including the ones from the spin-off Cars Toon, which I don't collect--and I can tell you I've wasted so much money paying for repeat pieces. Often, I'd buy a single release only to find it months later in some limited-edition box set with other rare characters. That has pretty much been the story of my Cars collection, which I began in 2006, when the Philippine distributor of the film gave me three die-cast characters for being a judge in their theater-display competition.

And now that I have yet to complete the entire line from the first Cars film, here comes Cars 2, which--as you might expect--is also overflowing with characters in both main and cameo roles. In other words, Mattel and Pixar are out to fleece us once again. As I write this, I've already bought seven characters from Cars 2: Finn McMissile, Francesco Bernoulli, Holley Shiftwell, Professor Z, Acer, Grem and Double Decker Bus.

Needless to say, I'm worried. I'm worried that I will once again end up buying repeat items (which I just give away to the children of friends and officemates, so it isn't really such a waste). Thankfully, Mattel has released a visual guide to the first wave of die-cast characters that will be released. For instance, I now know better than to buy a more expensive Shu Todoroki race launcher set, because the guide says Shu will be released as a single.

It seems shallow, and you will never relate to this sentiment if you're not a zealous collector, which, unfortunately, I am. Check out the visual guide to the first Cars 2 die-cast characters below. You may download the file here. 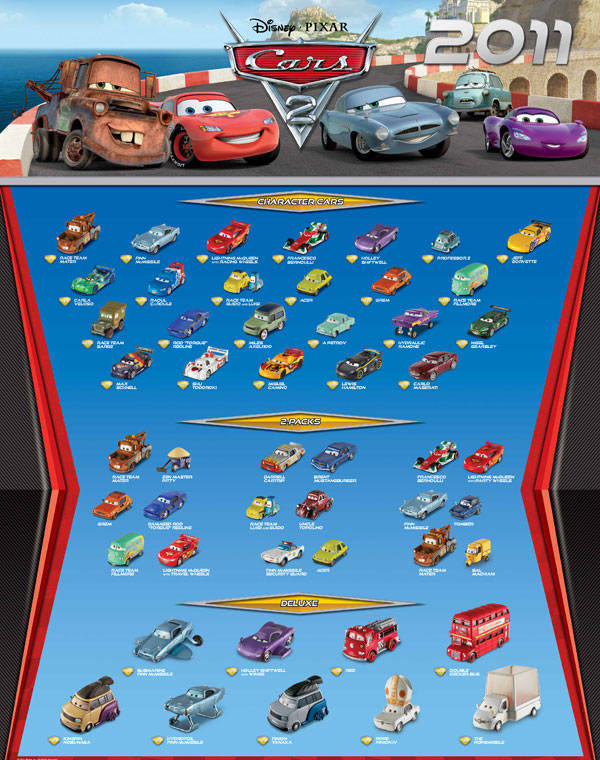 Maico Buncio's eerie numbers
View other articles about:
Read the Story →
This article originally appeared on Topgear.com. Minor edits have been made by the TopGear.com.ph editors.
Share:
Retake this Poll
Quiz Results
Share:
Take this Quiz Again
TGP Rating:
/20