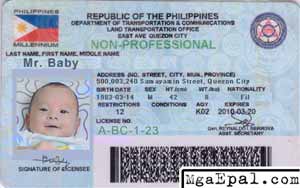 Initial investigation disclosed that the suspects were nabbed during an entrapment operation conducted by agents of the HPG-National Capital Region and Manila Police District.

Confiscated from the five suspects were computers, printers, scanners and laminating machines that were allegedly used in fabricating the bogus government documents.

The suspects are detained at the HPG-NCR in Camp Crame, Quezon City to undergo further investigation.

Photo from Epal.com is for illustrative purposes only and is not part of the raid