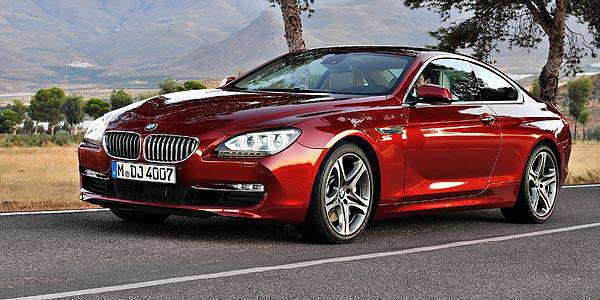 BMW has revealed the all-new 6-Series Coupe almost four months after the launch of its convertible counterpart in November 2010.

As the third-generation of BMW's luxury grand tourer, the BMW 6-Series Coupe adds "another intoxicating chapter to its decades-long tradition in the production of exclusive dream cars."

Like the 6-Series convertible, the all-new coupe has a sweeping, sculpted bonnet and a deep passenger compartment, thanks to a wheelbase that is 75mm longer than that of its predecessor's. Helping to complement this is the 460-liter luggage space.

The BMW 6-Series Coupe squats lower to the ground, thanks to a 39mm increase in width and a 5mm height reduction over the outgoing model. The German carmaker also boasts shaper driving dynamics and optimized comfort levels for the new Coupe, making it the only model in its class to offer top-class sporting ability with the coziness of a touring car.

Both engine variants come with an eight-speed Sports automatic gearbox and BMW's EfficientDynamics measures that optimize both engines' efficiency while significantly increasing its power output by 40hp for the 650i and nearly 47hp for the 640i. This allows the 650i Coupe to sprint from zero to 100kph in 4.9 seconds before reaching a top speed of 250kph while the 640i Coupe runs the same sprint in 5.4 seconds while also topping out at 250kph.

In addition, the Auto Start-Stop function and Eco Pro mode will also be available for the 640i Coupe.

Brunei Sultan\'s car collection rotting away - report
View other articles about:
Read the Story →
This article originally appeared on Topgear.com. Minor edits have been made by the TopGear.com.ph editors.
Share:
Retake this Poll
Quiz Results
Share:
Take this Quiz Again
TGP Rating:
/20