The Jaguar E-Pace could shake up the premium CUV segment 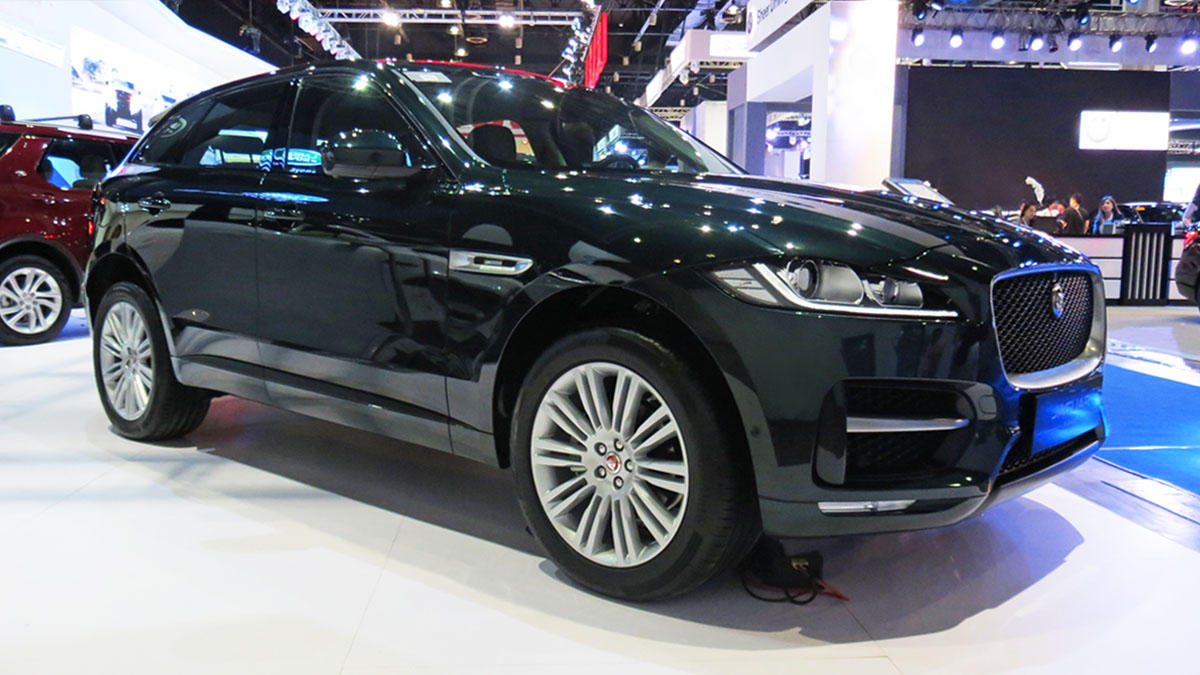 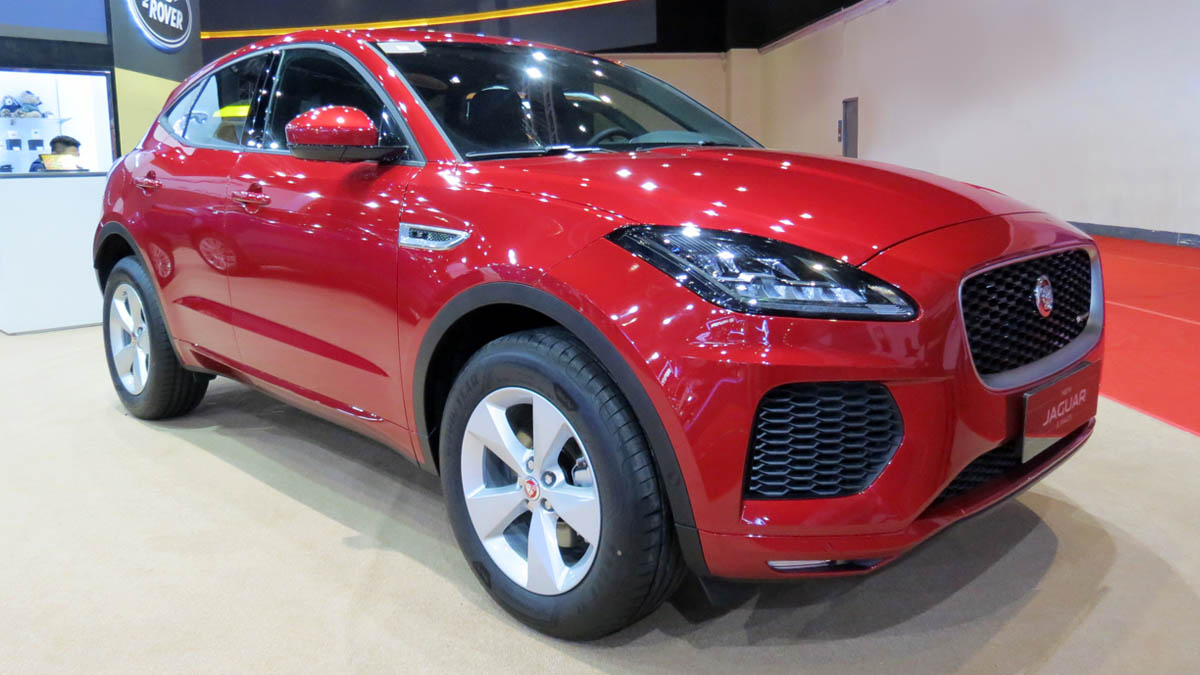 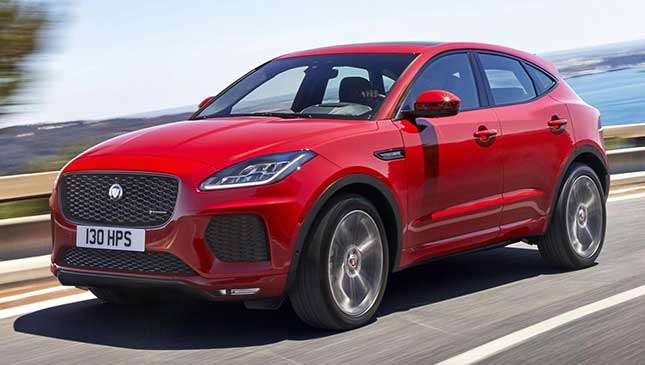 Just as you were getting used to the F-Pace, and bracing yourself for the electric shock of the I-Pace, here’s yet another Jaguar crossover, the E-Pace. E doesn’t mean electric, it just means smaller than F.

If you want to file it among rivals, think of the BMW X1, Mercedes-Benz GLA, and Audi Q3. Lest you think we’re fixated in the German big three, try the new and expanded Mini Countryman or the Lexus NX.

Of course the project has some dusty internal codename, but not long after its development began, Jaguar people started calling it 'the Cub.' "It sort of fits," design director Ian Callum says. "It’s got big paws and big eyes." Meaning huge wheels (up to 21 inches, the biggest of any small crossover) and headlights that pull back over the front wheels, a whole different character to the ones on other Jaguars." 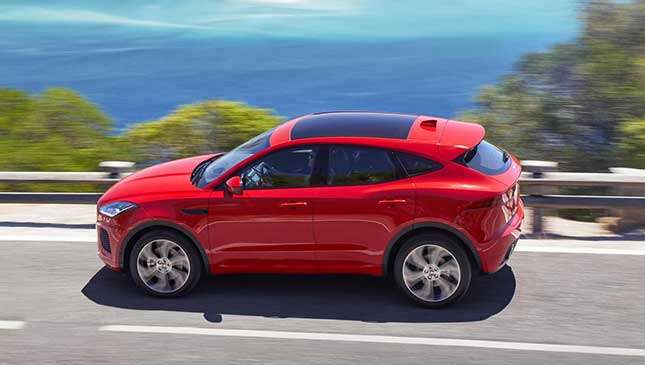 Callum says: "We’ve learnt a lot about SUVs in the last few years now--despite my reluctance at the beginning to design them. This one has got an element of fun about it, which we really enjoy. It’s really quite different from the other ones."

The eyes have it. The new design was dictated by what’s underneath, a transverse engine. This means the front wheels are further back and the overhang is longer. The pulled-back lamp shape goes some way to disguising this. The corners are chamfered in plan form too, and get big grilles. "They use the mass of an SUV appropriately."

The grille is very Jaguar, and you can spot other bits burgled from the F-Type sports car. Callum says: "The headlamps are actually more like an F-Type’s than the F-Pace’s. The way the crease line runs in to the door, then disappears, then picks up again in the arch, the lines are very much of those of F-Type. The window line has got that kick up at the back." 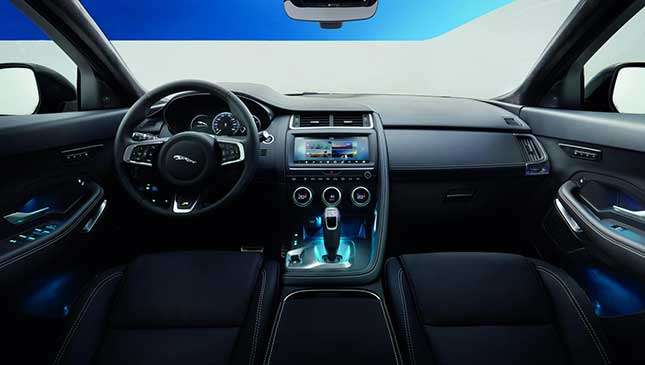 Inside, too, there’s a bit of F-Type in the asymmetric pod that embraces the driver, marked out by a grab handle for the passenger. And the automatic versions have an F-Type-ish selector handle, not the rotary drum from Jag’s sedans and F-Pace. Mainly, the interior is all about technology and family life. 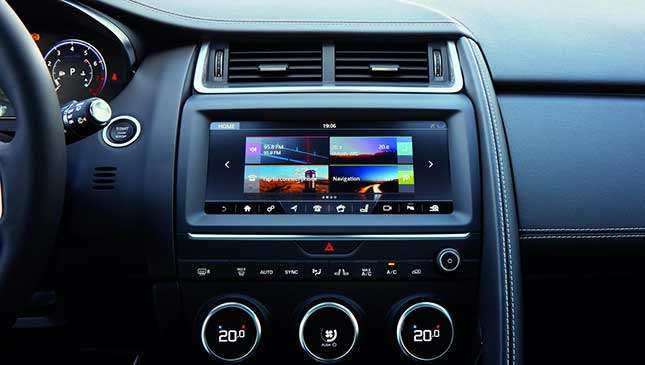 So every version gets a high-def central touchscreen. On the options list is a full-TFT instrument pack too, highly configurable as these things always are—though we always find, with a Range Rover or an Audi, that we end up settling on the round-dial configuration anyway, so why not just go for the cheaper real ones not the optional false ones? A better option is the new heads-up display, a whole lot crisper and more informative than Jaguar’s existing one.

To keep it, and its occupants, fully connected you’ll find a 4G hotspot, a suite of nifty inbuilt apps, and loads of recharging points about the place. We won’t be on our iPads though; we’ll be bathing our ears in the optional 825-watt Meridian sound system. When you don’t need all those devices, there are plenty of storage boxes around the cabin to hide them away. 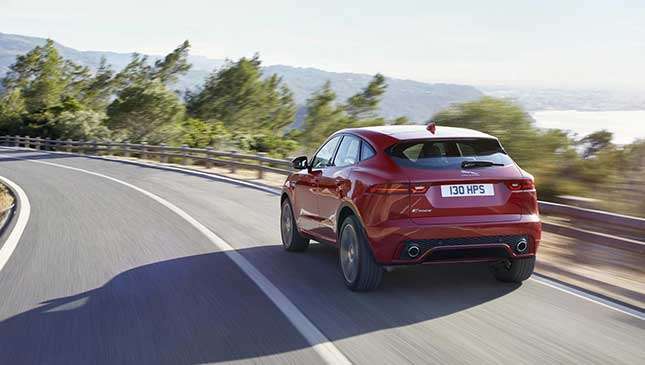 The E-Pace is being built in Graz, Austria, by MagnaSteyr, because Jaguar Land Rover’s UK factories are running fit to bust. The starting price is £28,500 (P1.8 million).

That’s almost exactly the same money as the cheapest XE. But don’t make assumptions that it’s just a jacked-up version of the XE. The E-Pace’s transverse engine points to the fact it’s a very different vehicle. The core of its body is made of steel not aluminum, the engine is transverse not longitudinal, and the 2WD version is hauled along by its front wheels, not pushed by the rears. In fact, the E-Pace shares a lot with the platforms of the Range Rover Evoque and LR Discovery Sport platform—its wheelbase is actually between those two. 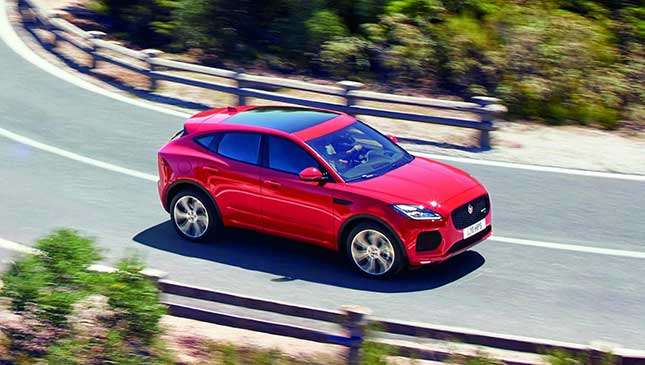 It’s the commitment to family values that led the E-Pace team to this fundamental technical choice. Why not use the high-zoot aluminum longitudinal rear-drive platform from the XE, XF and F-Pace, the one Jaguar has made so much of these past few years?

The aluminum platform’s longitudinal engine, and the fact its crash structures and climate-control and suspension and other major systems are sized for bigger cars, mean that if they’d made it any smaller it wouldn’t have had family-sized room inside. Also, an aluminum body would have cost more, and Jaguar figured customers in this market wanted to put that cash toward connectivity and features.

To claw back some lightness, the E-Pace has aluminum for its hood, front wings, tailgate and roof. That’s 30kg saved versus steel parts. The suspension is mostly aluminum. Several critical body parts have switched to ultra-high-strength steel too. That adds stiffness—for dynamics and crash safety—but not weight. 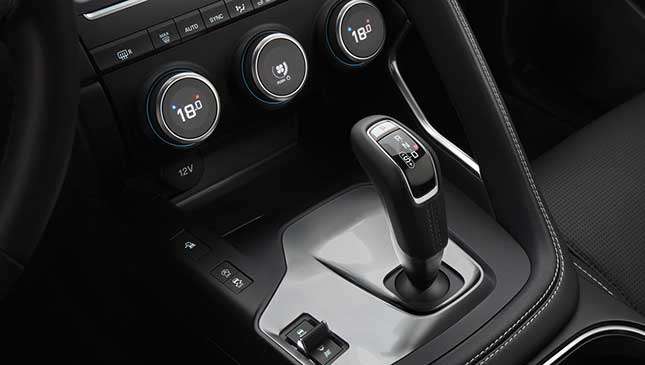 As you go up the power strata, the driveline adds a nine-speed auto transmission and four-wheel-drive. In fact only the base diesel engine can be had with FWD.

Even the 4WD system is stratified. The basic system has a controlled center diff and a regular rear diff. Instead of that, the most powerful engines are paired with the Evoque/Focus RS’s mechanics, where the rear drive unit is also electronically controlled. The engineers say this gives the E-Pace the feeling of being rear-driven. The suspension has been thoroughly redesigned and mounted more stiffly, at the front and back, for more driving precision.

A Configurable Dynamics pack gives you a control menu of settings for adaptive dampers as well as steering weight, powertrain mapping and the torque vectoring systems. 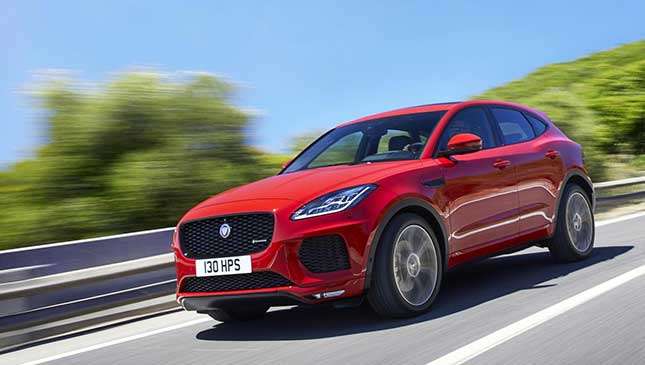 So it’s got a lot of grown-up tech, as well as a mature attitude to cabin practicality. Even so, the designers and engineers wanted to remind you it’s all supposed to be a bit more lighthearted than the other Jags. Hence the cub tag. They even ended up building that into the car, by the way. Walk up to it at night, unlock, and the door mirrors project a light downwards. In most cars, that’s just a light pool. In some it’s an image of the badge. In the E-Pace, it’s a silhouette of a Jaguar and her cub. Sweet, eh? 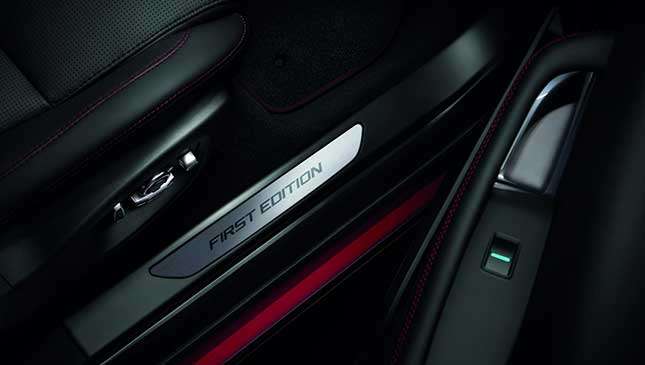 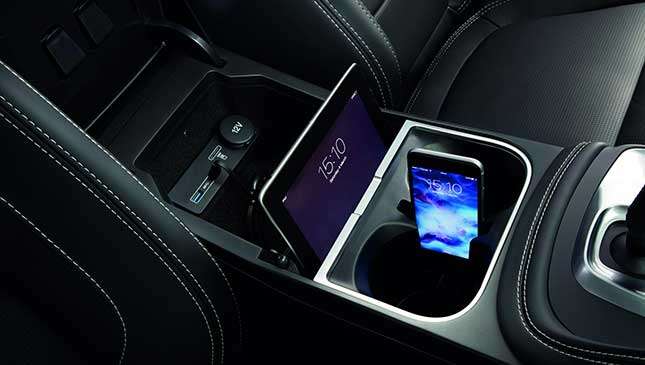 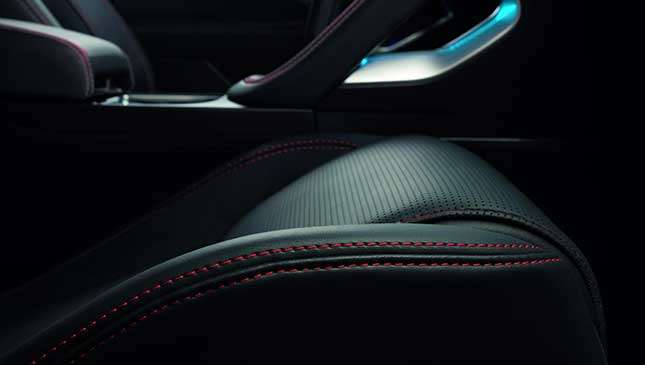 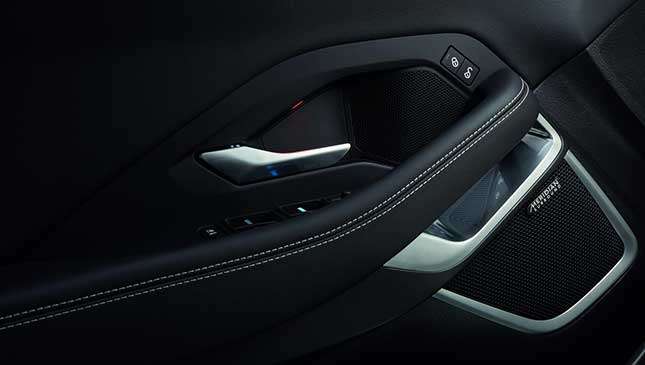 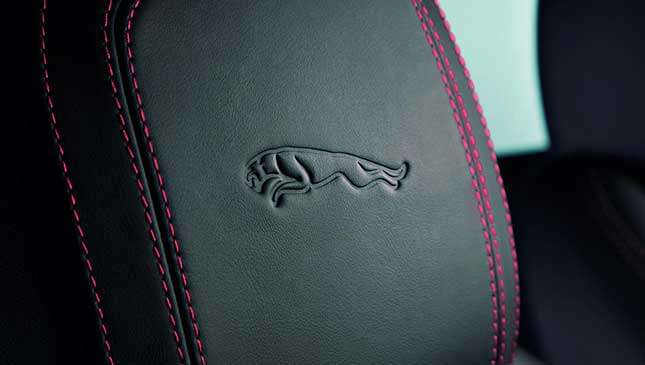 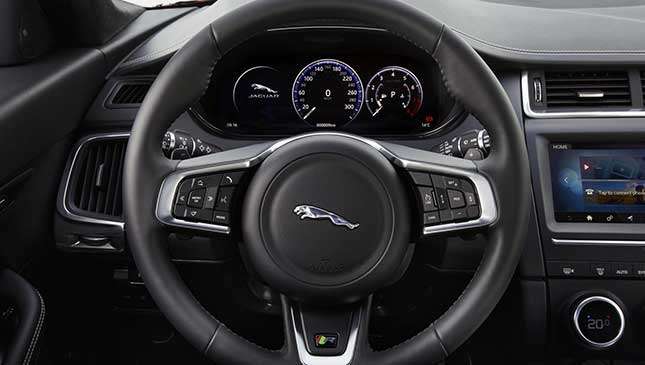 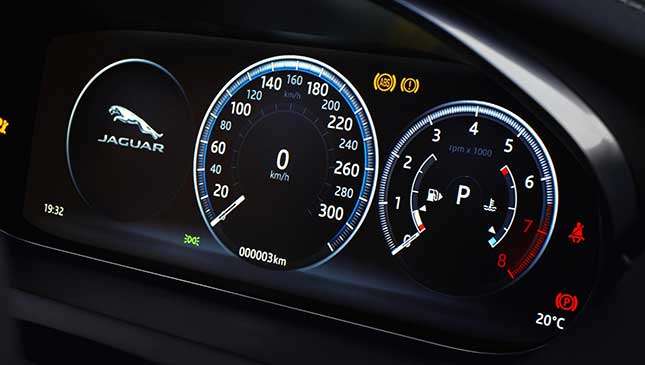 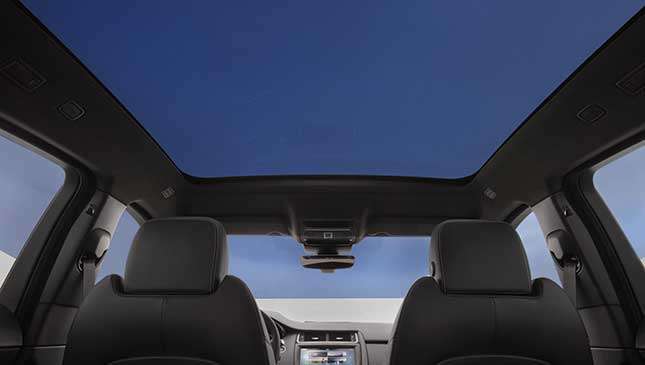 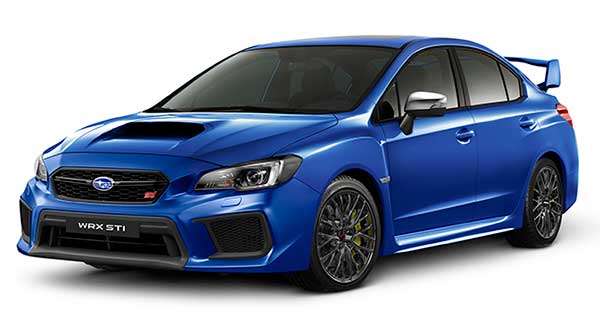 New Subaru WRX and WRX STI slated for PH release
View other articles about:
Read the Story →
This article originally appeared on Topgear.com. Minor edits have been made by the TopGear.com.ph editors.
Share:
Retake this Poll
Quiz Results
Share:
Take this Quiz Again
TGP Rating:
/20