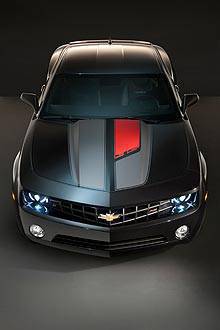 Chevrolet is celebrating the 45th anniversary of the Camaro this year and as per the American carmaker's tradition, the special-edition model to mark the occasion carries all of the latest upgrades to go with the additional design elements that are unique to the vehicle.

The 45th anniversary special-edition Chevrolet Camaro package will be offered for both the 2LT and 2SS trim levels and is also available for both coupe and convertible models. Unique to it is the Carbon Flash Metallic paint job that's capped by a red and silver rally stripe. The anniversary package also includes:

On top of the anniversary package, the special-edition Camaro also gets the same upgrades that will come with the standard, run-of-the-mill 2LT and 2SS models.

For 2011, the 2LT Camaro gets an all-new V6 LFX engine that, despite having the same 3.6-liter displacement as its predecessor, delivers 323hp--11hp more over the current V6 mill--without sacrificing fuel economy.

The 45th anniversary Camaro is also equipped with a new FE4 suspension that has been designed to provide a more refined handling. The end result is more effective body control and more precise response in situations that require performance driving.

For its exterior, the Camaro gets a new rear spoiler as standard. The same goes, too, for the taillamps that, previously, were optional with the RS appearance package.

The Camaro's interior has also been upgraded with a revised instrument panel with new instrument graphics and trim, a new steering wheel that has been ergonomically designed for pefromance driving and a power lift feature for the front passenger seat.

"The appeal of Camaro design and performance has powered it to the top of its segment," said Rick Scheidt, vice president of Chevrolet marketing. "For 2012, we’re capitalizing on that momentum with enhancements to Camaro’s performance and comfort."

MMDA gets ready for Holy Week traffic
View other articles about:
Recommended Videos
Read the Story →
This article originally appeared on Topgear.com. Minor edits have been made by the TopGear.com.ph editors.
Share:
Retake this Poll
Quiz Results
Share:
Take this Quiz Again
TGP Rating:
/20