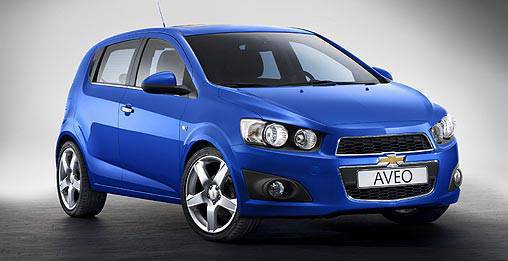 Chevrolet has revealed another one of the cars it will officially introduce at the Paris Motor Show--the production version of the all-new Aveo subcompact.

The all-new Aveo bears the aggressive face Chevrolet first seen in the all-new Cruze, particularly the dual port grille. The Aveo, though, gets exposed twin headlamps that, in combination with the rising shoulder line, short overhangs, "hidden" rear door handles that are integrated into the C-pillar, and slightly flared fenders help enhance Chevrolet's design language.

The new Aveo is longer and wider than its predecessor, giving it a spacious interior that is said to be one of the best in its class. Its motorcycle-inspired instrument cluster, which seems to be in vogue in small cars nowadays, combines an analog tachometer with a digital speedometer. Blue backlighting on the center console give the interior an up-market ambience while its audio system has Bluetooth functionality as well as both USB and auxiliary input ports.

For the European market, the all-new Aveo will be available with either a 1.2- or a 1.4-liter engine that puts out 86hp and 100hp, respectively. The Aveo will also be offered with two versions of a 1.3-liter diesel engine that produces 75hp and 95hp, respectively, and will feature Start/Stop technology.

Chevrolet will offer a six-speed automatic transmission as an option for the 1.4-liter Aveo while, depending on the engine choice, the rest of the lineup will receive either a five- or six-speed manual transmission.

"It's just such an exciting time to be at Chevrolet,” said Wayne Brannon, president and managing director of Chevrolet Europe. “Not only do we have new entries into the MPV and compact classes, in Aveo we have a car which is ready to compete against the best in the small car segment, which is also Europe's largest segment."

Want to see the current Chevrolet Aveo lineup in the Philippines? Click here.