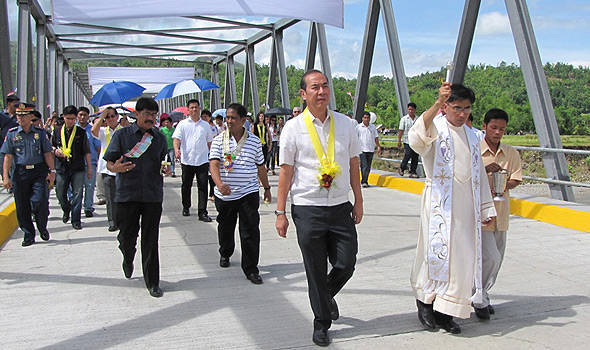 The Department of Public Works and Highways (DPWH) has completed the construction of 14 new bridge projects in different parts of Panay Island in the Western Visayas Region last month, providing "a new dimension of development by reinvigorating isolated communities and opening new avenues of economic opportunities."

According to the department, the completed bridges are part of the Japan International Cooperation Agency-funded Urgent Bridges Construction Project for Rural Development, which was implemented by the President's Bridge Program Office.

In the province of Antique, the DPWH completed the construction of nine single span reinforced bridges along the Anini-y-Tobias Fornier-Hamtic Road, namely:

According to DPWH secretary Rogelio Singson, the completion of these new bridges "ensures a safe and reliable movement of people, goods and services in Antique," and boosts the department's target program to put up 100-percent permanent bridges along national highways by 2016.

The DPWH also completed three bridges in the Iloilo province.

The construction of the 150.30-linear-meter Nichols Bridge along Alimodian-Sinamay-Santa Cruz-San Miguel Road in Iloilo has been completed to replace the old bridge that collapsed at the height of typhoon Frank in June 2008. Costing P383.152 million, the project also includes the concrete paving of 114.683 linear meters of approach road "A" and 104.517 linear meters of approach road "B". There are also the 54.80-linear-meter Culasi Bridge along Ajuy-Barotac Road at a cost of P59.560 million, and the 12.80-linear-meter Balua Bridge along the Manduriao-San Miguel-Alimodian-Maasin-Cabatuan Road at P33.710 million.