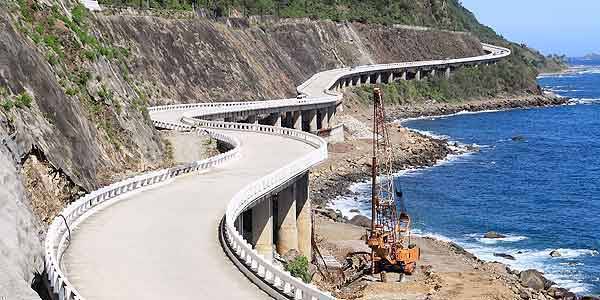 The Department of Public Works and Highways (DPWH) is working double-time to meet the August 31 deadline set for the completion of the repairs on the Ilocos region's Patapat Viaduct, the fourth longest bridge in the Philippines.

Roughly 86 percent of the 1.3-kilometer Patapat Viaduct is undergoing restoration after the bridge was damaged by land and rock slides.

"We have asked our men to work round the clock but without sacrificing quality work," DPWH Undersecretary Romeo Momo said.

The bill for the repairs on the Patapat bridge is estimated to reach P219.1 million.

Tourism and trade in Northern Luzon are expected boom once the restoration of the bridge is complete. Northern Luzon is the home of prime destinations like the beaches of Pagudpud, the Bangui Windmills, the Malacañang of The North and the Cape Bojeador Lighthouse.

The Patapat bridge, which stands between the seashore and the foot of the Patapat mountain, is a destination in itself as it provides a great view of Northern Luzon's coastline.

Mercedes-Benz to launch CLC 180 Kompressor Sport
View other articles about:
Read the Story →
This article originally appeared on Topgear.com. Minor edits have been made by the TopGear.com.ph editors.
Share:
Retake this Poll
Quiz Results
Share:
Take this Quiz Again
TGP Rating:
/20