Guys, this is how we should look at drunk-driving 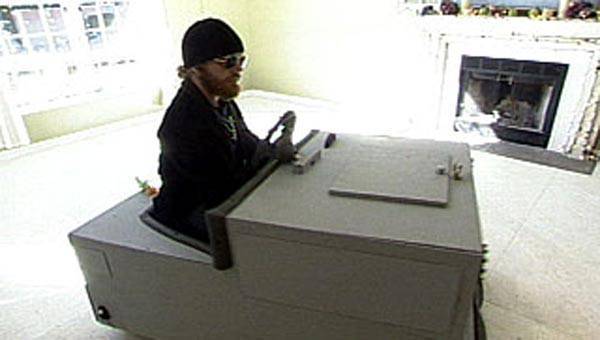 Yesterday, we reported that Jackass star Ryan Dunn had died in a car crash involving his Porsche 911 after a night of drinking. Dunn and a passenger were killed on the scene. In our short post about the incident, we wrote the following exhortation: "Let this news serve as a reminder that it is never good to drive right after drinking." Which resulted in the displeasure of one reader, who commented: "I don't think drunk-driving was the case. Nakapag-post pa nga ng twit pic e. Let's give the man some respect and leave it at that (as an accident). Making an example of him doesn't lessen the drunk drivers out there, so just leave it."

To which we replied: "No disrespect to the man, but believe us, you can tweet even when you're drunk."

Over in the US, another guy got rebuked by celebrity-gossip blogger Perez Hilton for tweeting what Hilton perceived as insensitive toward Dunn's loved ones. Film critic Roger Ebert had posted the following on his Twitter account: "Friends don't let jackasses drink and drive." The melodrama queen that he is, Hilton posted on his popular blog: "We certainly agree that driving after drinking is wrong, we think there's no reason--especially RIGHT NOW--that anyone should be pointing fingers or poking fun at a truly tragic situation. Everyone makes mistake, and this is somebody's son. Too soon, Roger."

And this is where it got interesting. You would think that with Hilton's fame, his virtual minions would flood his post with anti-Ebert remarks. Guess what: The majority of those who bothered to comment actually sided with Ebert, proving once more that drunk-driving is absolutely frowned upon in America.

Here, allow us to share with you 20 of the more insightful statements pasted on Perez Hilton's blog entry. Maybe they will teach us a thing or two about the seriousness of the issue.

* "The ones who let him drive should feel guilty. It's time to direct anger at those who allow others to drive drunk. This just puts it out there."

* "Had Ryan Dunn lived, he'd be in jail. Remember Hulk Hogan's son, and how everyone attacked him? How is this different?"

* "Ryan had at least six drinks. He drank a lot and then drove too fast trying to show off. He not only killed himself but someone else. So tell me how calling out his friends for letting this dude drive after drinking that much, is insensitive."

* "This is NOT the time to sugarcoat anything. If alcohol was involved on any level, it needs to be brought out LOUD!"

* "IF Ryan was drunk, I'm sure his friends were too. That is really all I have to say. One drunk dude isn't going to stop another from driving."

* "If you even READ the tweet, it wasn't directed at Ryan Dunn. It was directed at his friends who said he had six drinks before he left. Ebert was basically saying, if they were his friends, they wouldn't have let him drive."

* "What if he had killed a pedestrian, a child riding a bike or a family driving in another car? The fact is that he chose to drink and drive. In the process, he killed himself and his friend. The real tragedy here is not his death--he knew the potential consequences of his actions--the real tragedy is the pain that his friends and family have to endure because of his loss. Don't contribute to the problem by defending his actions. He was 100-percent wrong and unfortunately he paid the ultimate price for his own decision."

* "This man is deplorable and we are just lucky that he's been taken off our road. Ebert was just saying the truth and telling it how it is. I had a partner who was killed when a drunk driver hit him. He burned alive in his car and I had to identify his burnt corpse. This is why I hate drunk drivers so much. What is more sad is that this lady who hit him had just been given back her license after having it disqualified for drunk-driving four times. No one who is a drunk driver should ever be allowed to have their license back. They should face long jail time."

* "INSENSITIVE? How about the truth that young kids need to hear instead of the sh*t on your site that glorifies everything and even makes teen moms celebs? Hypocrite."

* "People can't accept responsibility anymore. Would people be crying about Ebert being insensitive if they were planning their son's or husband's funeral because of this drunk douchebag?"

* "You know what's insensitive and disrespectful? Killing your friend and passenger because you are driving drunk, as well as killing yourself and leaving your loved ones behind. I feel sorry for him and his family, but he's killed someone else! God, Ebert is completely right. It's outrageous and there's no room for glossing over the facts here."

* "Ebert is right. Ryan may be someone's son, but he knowingly risked killing someone by driving drunk. NO sympathy at all here."

* "Don't ever get in a car if you even SUSPECT the person behind the wheel has had a drink--let alone if you KNOW they've been drinking."

* "Drinking three beers and three shots, and then driving at 100mph in a 40mph zone is NOT an accident. An accident is something that could not have been reasonably prevented. I don't appreciate having people like that on the same highways I take my family out on. Each time I hear about one who bites the dust, it makes me happy."

* "Are we really going to take a lesson on morality from Perez Hilton? The man who made his fortune from being a peeping tom and a salacious gossipmonger? It is NEVER too soon to talk about how drunk-driving can affect lives. If anything, it is better to get the message out there whilst the shock is still present. Good on you, Roger Ebert. If anything, you didn't say it strongly enough."

* I have no sympathy for Ryan but I do have sympathy for his family, and all I can hope is that his fans choose to use his death as a lesson that drunk-driving can kill anyone."

* "I applaud Mr. Ebert for the timing of his comment. I wholeheartedly support it and think you need to get your priorities in line. His comment serves to raise awareness among kids that this behavior is wrong, and that we have a responsibility to call people out when it happens. His comment should be applauded. Ebert 1, Perez 0."

* "There's nothing too insensitive about reminding jackasses not to drink and drive. How many people have to die to get the point?"

* "Sober or not, you can't protect yourself against stupidity, but maybe someone else will learn from Ryan's stupid example."

* "Aren't you the sanctimonious little twit, Hilton. You really don't have a clue in your rainbow-and-butterfly world, do you?"

Photo from the MTV Homewrecker

Are you ready for the Mini Coupé?
View other articles about:
Read the Story →
This article originally appeared on Topgear.com. Minor edits have been made by the TopGear.com.ph editors.
Share:
Retake this Poll
Quiz Results
Share:
Take this Quiz Again
TGP Rating:
/20