The question is if and when we'll get it here
Oct 3, 2011
CAR BRANDS IN THIS ARTICLE 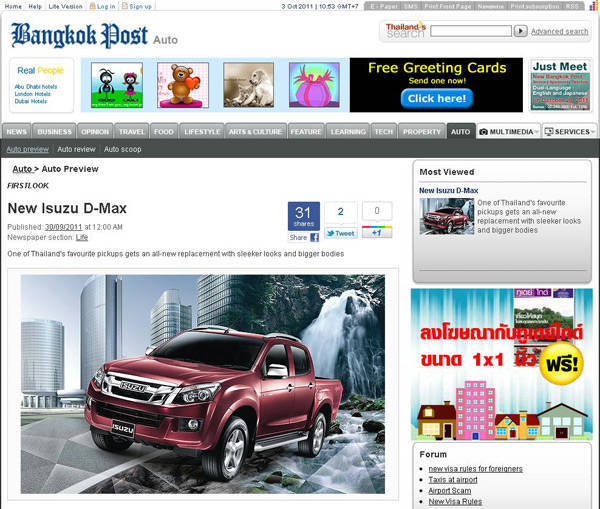 Isuzu has given Thailand a glimpse of the all-new D-Max before the Japanese commercial-vehicle manufacturer officially launches it there later this week.

According to the Bangkok Post, the all-new D-Max shares the same body as the all-new Chevrolet Colorado but the exterior design details like the headlights, taillights, grille and front bumper make the two pickup trucks distinct from one another. Inside, though, the D-Max and the Colorado share the same basic dashboard design as well as a few interior panels. The D-Max, however, gets differently-styled dials and center console cluster for the in-car entertainment system and air-con.

Though the all-new D-Max's dimensions were not disclosed, the report said the all-new truck is "vastly bigger" than before, improving on its predecessor's interior space and cargo-hauling capabilities. Isuzu also claims that its new "i-Grip" platform can accommodate a truck body that's 42 percent stiffer than before to help improve its ride and handling.

Providing power to the all-new D-Max will reportedly be the same diesel-turbo engines though it has been tweaked to comply with Euro-5 emission standards with higher outputs and a new-generation common-rail fuel-injection system. Two 2.5-liter engines are available with power outputs at 116hp and 280Nm of torque and 136hp and 320Nm of torque, respectively, while a 3.0-liter mill produces 177hp and 380Nm of torque.

Although a five-speed manual will still be offered with the D-Max, a five-speed automatic transmission to match its similarly equipped Japanese rivals will also be made available.

Keeping the all-new D-Max and its occupants safe from harm are the anti-lock brakes, brake assist, traction control and vehicle stability system while an 8-speaker audio system with surround sound gives the truck a luxury feel.