Compare it with the old one
Jan 5, 2011
CAR BRANDS IN THIS ARTICLE 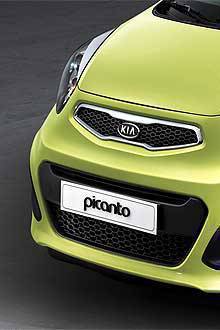 Kia Motors has released the first official photos of the next-generation Picanto, which comes with a "bolder, more mature and more self-confident look."

"Completely redesigned and re-engineered, the new car has grown in overall length and wheelbase, and is set to redefine its position as one of the most competitive vehicles in its segment," Kia said in a statement.

Available Picanto units in the Philippines are equipped with a 1.0-liter engine. Kia said, however, that the "grown-up" Picanto will be offered in all-new powertrains whose gasoline-fed engines come in 1.0- and 1.2-liter displacements. The Korean carmaker said "LPG, bi-fuel and flex-fuel variations" will also be available depending on market requirements.

Kia has yet to announce the market release of the Picanto but the next-generation city car will be officially unveiled at the Geneva Motor Show in March.

Check out the gallery below for more images of the new Kia Picanto or click this link for the sketches released in December, as well as a photo of the car that is currently available in the Philippines.

The Picanto is being sold starting at P595,000. How much do you think will the next-gen version cost?

Ferrari Enzo prototype goes on sale
View other articles about:
Read the Story →
This article originally appeared on Topgear.com. Minor edits have been made by the TopGear.com.ph editors.
Share:
Retake this Poll
Quiz Results
Share:
Take this Quiz Again
TGP Rating:
/20