MIAS 2011: Check out the latest cars in the Philippines

It's an action-packed four-day event
by Patrick Everett Tadeo | Apr 7, 2011 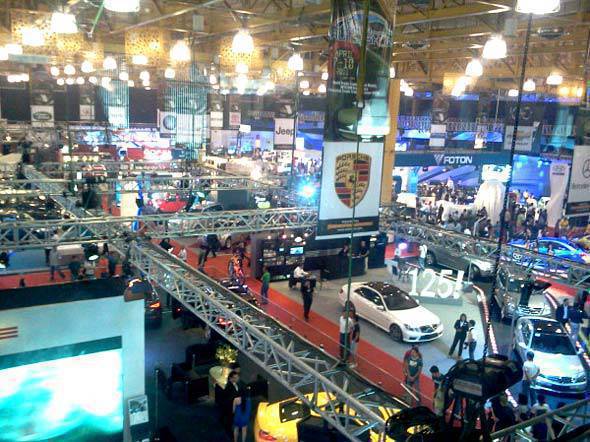 The 7th Manila International Auto Show (MIAS) is literally bigger than ever and it is now open so start making your way to the World Trade Center in Pasay City to check out cars upon cars occupying a floor space of 23,000sqm.

With so much space available and with the 27 different car brands showing off their products at the main exhibition hall alone, a handful of new car launches scheduled at the MIAS today will surely leave a lot of people salivating.

On top of the list is the all-new Hyundai Elantra, which many TopGear.com.ph readers admire judging from the comments posted in previous articles. For those looking for a luxurious yet versatile car, local Volvo distributor Viking Cars will be launching the V60, the wagon version of the S60 midsize sedan. There's also the Subaru Forester with the new-generation engine for the 2-liter variant.

MIAS, also known as the venue where most of the country's Chinese car distributors make a big show of their offerings, is also playing host to the entry of Geely Automobile with two models to launch--the Emgrand EC7 sedan and the Panda city car hatchback.

The event isn't all about new cars, however, as the MIAS also holds its annual Custom & Classic Car Competition. Popular car restoration expert Alex Isip won last year’s top prize so all eyes are on him to see if he’ll make it a back-to-back win for Alex Car Restoration.

After the exhaustive test drives done by the Car Awards Group, Inc., the event will finally see the winners of 2010-2011 Car of the Year Awards later tonight.

Guinness World Record holder Russ Swift is also here for the fifth straight year to once again showcase his numerous car stunts. Swift’s appreciative fans can get to see him do what he does best for all four days of the event, with three shows to be staged each day.

Other activities that will be held over the weekend are driving seminars conducted by renowned race car driver JP Tuason, live band entertainment, a fashion show and the first leg of the European Mobile Media Association's 2011 auto sound competition.

With the bigger venue and the flurry of activities to be staged during the next four days, the show's organizer, Worldbex, expects this year's crowd to surpass the record of almost 80,000 people who visited the MIAS in 2010.

When will you get your hands on the 2011 Ford Explorer?
View other articles about:
Recommended Videos
Read the Story →
This article originally appeared on Topgear.com. Minor edits have been made by the TopGear.com.ph editors.
Share:
Retake this Poll
Quiz Results
Share:
Take this Quiz Again
TGP Rating:
/20