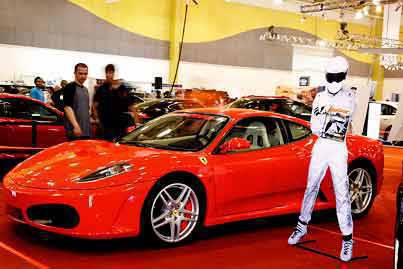 The Manila International Auto Show (MIAS) aims to mount a bigger event on its fifth year despite today's economic climate.

With 40 exhibitors taking up 20,000 square meters of the World Trade Center's indoor and outdoor display areas to welcome more than 70,000 guests, the MIAS is slated to be the year's biggest motoring event. This is a big leap from the first MIAS featuring only 15 brands on a 6,000-square meter space in 2005.

This year's MIAS theme, "Passion for Performance," aims to highlight car and equipment performance in terms of driving pleasure and fuel economy. The auto show hopes to be a major proponent in the success of the Philippine auto industry - which projects a two to four percent growth - amid the global economic slowdown.

The 2009 MIAS highlights include the return of Russ Swift, Guinness World Record holder in precision driving for the fastest doughnut spin, the tightest J-turn, and parallel parking in two seconds flat, as he gets behind the wheel of the Impreza WRX STI and the all-new Subaru Impreza sedan.

The new Subaru Impreza sedan is Motor Image Pilipinas' final piece to the Impreza lineup by adding two new four-door variants. Upfront, the Impreza sedan looks every bit like its hatchback sibling, but towards the back, it reveals a spacious squared-off trunk. Mechanically, both the hatchback and the sedan are identical with the exception of the latter's twin exhaust pipes. Like the hatchback, the Impreza sedan will be available in both normally-aspirated and turbocharged variants.

Further proving MIAS' value as a venue for new car launches, a slew of new-model cars from China will also be making their debut at the World Trade Center, like Chana's Starlight Jr. subcompact MPV, Foton's MPX minivan and Lifan's 520 sedan. Another Chinese brand to make its local debut is the Peri subcompact multipurpose vehicle from Great Wall.

Guests to the MIAS 2009 will also witness the debut of EVnnovations REVAi electric car, the first commercially available electric car in the country.

Following the success of 2008's premiere Custom Classic Car Competition, MIAS 2009 in cooperation with San Jose, California's Team Lightspeed follows it up with a new battle for customized and restored vehicles, all vying for the coveted "Best in Show" award.

The MIAS Custom Classic Car Competition will be housed at the tent pavilion adjacent to the World Trade Center's Main Hall, where aftermarket accessories, magazines and other automotive merchandise will be on display.

Meanwhile, the local unit of the European Mobile Media Association (EMMA) will hold a round of mobile sound competitions and training seminars for car audiophiles. EMMA Philippines provides training platform for both competitors and installers to extend their knowledge about audio equipment.

Other surprises await car nuts at the auto show. Five years represent an entire model's lifecycle among cars, but for the MIAS, five years mark just the beginning of passion and enthusiasm for all things automotive.