Here's a fresh alternative to the usual jeepneys and buses
by Patrick Everett Tadeo | Nov 11, 2009
CAR BRANDS IN THIS ARTICLE 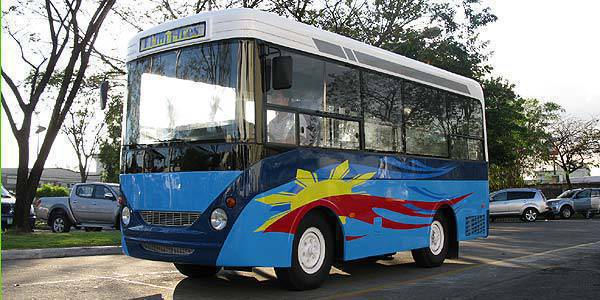 The BEEP, inspired by Europe's Gruau Microbus, is a micro bus that is suitable for Metro Manila's crowded streets--making it an ideal replacement for jeepneys and Asian utility vehicle (AUV).

"The auto industry should not only care about selling brand new vehicles but also take a lead role in improving the mass transport system," Mitsubishi Philippnies president and chief executive Masahiko Ueki said. "Since no assembler has really pursued to modernize the public transportation, MMPC as a socially responsible automotive company have collaborated with Almazora to come up with a better solution for mass transportation."

Using a FUSO Canter light duty truck chassis from Mitsubishi Philippines, Almazora Motors designed and manufactured a bus body that can accommodate 18 passengers on bench-type seats and up to eight standing commuters.

The BEEP is also fully-configurable depending on the needs of the client. Almazora executive vice president Conrad Almazora said his company can manufacture as much as 50 standard-configuration BEEPs a month, with a turnaround time of one month from order placement.

The bus-jeepney hybrid of Mitsubishi Philippines and Almazora is priced at P1.6 million, almost twice the price of an AUV. Its revenue potential, however, is more than double due to the larger seating capacity. Acquisition is also easier through bank financing.

AVT upgrades GPS navigation system
View other articles about:
Read the Story →
This article originally appeared on Topgear.com. Minor edits have been made by the TopGear.com.ph editors.
Share:
Retake this Poll
Quiz Results
Share:
Take this Quiz Again
TGP Rating:
/20