Expect traffic to be heavy along the motorcade route
May 20, 2011 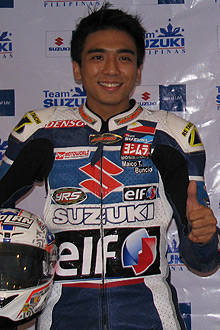 Expect traffic in Mandaluyong, Quezon City and Marikina to be heavy tomorrow as over 1,000 motorcycle riders have reportedly signified their intent to join the memorial motorcade for champion motorcycle racer Maico Buncio when he is brought to his final resting place in Loyola Memorial Park in Marikina tomorrow afternoon.

The motorcade will start at the Loyola Memorial Chapels in Guadalupe, Makati, and briefly take the EDSA southbound lane before turning right on Estrella Avenue to go to the Mandaluyong Circle via San Francisco Avenue.

The procession will then head to Boni Avenue and pause at the corners of Basilan Street and J.P. Rizal as Buncio's funeral car and the vehicles carrying his immediate family members will take a brief detour to pass by YRS Motorcycle Modifications, which is owned by the Buncio family, at the corner of Halcon and Talayan Streets before rejoining the motorcade.

After going through the tunnel along Pioneer Street, the motorcade will turn left on Reliance Street and roll on until Shaw Boulevard before taking the northbound lane of EDSA. The motorcade will then turn right on Temple Drive and traverse White Plains Avenue before taking Katipunan Avenue and finally proceeding toward Loyola Memorial Park in Marikina.

Motorcyclists who are planning to join the motorcade are advised to wait in one of four designated stations and wait for the funeral procession to pass by before joining it at the tail end.

To easily identify the riders who are part of the procession, a black-and-yellow ribbon should be tied to the motorcycle's left-side mirror.

While traffic is expected to be heavier than normal in the areas the funeral procession will pass by, let us remember that this is being done to honor one of the best--if not the best--motorcycle racers our country has ever seen.

All-BMW car show set for tomorrow
View other articles about:
Read the Story →
This article originally appeared on Topgear.com. Minor edits have been made by the TopGear.com.ph editors.
Share:
Retake this Poll
Quiz Results
Share:
Take this Quiz Again
TGP Rating:
/20