The Land Transportation Office (LTO) has just released the implementing rules and regulations (IRR) for Republic Act No. 11235, otherwise known as the Motorcycle Crime Prevention Act, with some modifications from the original version signed into law by President Rodrigo Duterte on March 28, 2019.

Before we proceed, let’s refresh your memory. One month after he signed RA 11235 into law, Duterte, a motorbike enthusiast, suspended the law’s implementation and asked Congress to reconsider the provisions pertaining to the size and the material of the front number plate. More than that, he called for the reduction of the penalties on certain violations.

Although he claims to be 100% supportive of this anti-crime law, Duterte thinks RA 11235 is “unfair and discriminatory,” particularly to ordinary employees who use motorcycles as their form of daily transport. So, this IRR by the LTO apparently puts the President in a ‘win some, lose some’ predicament. 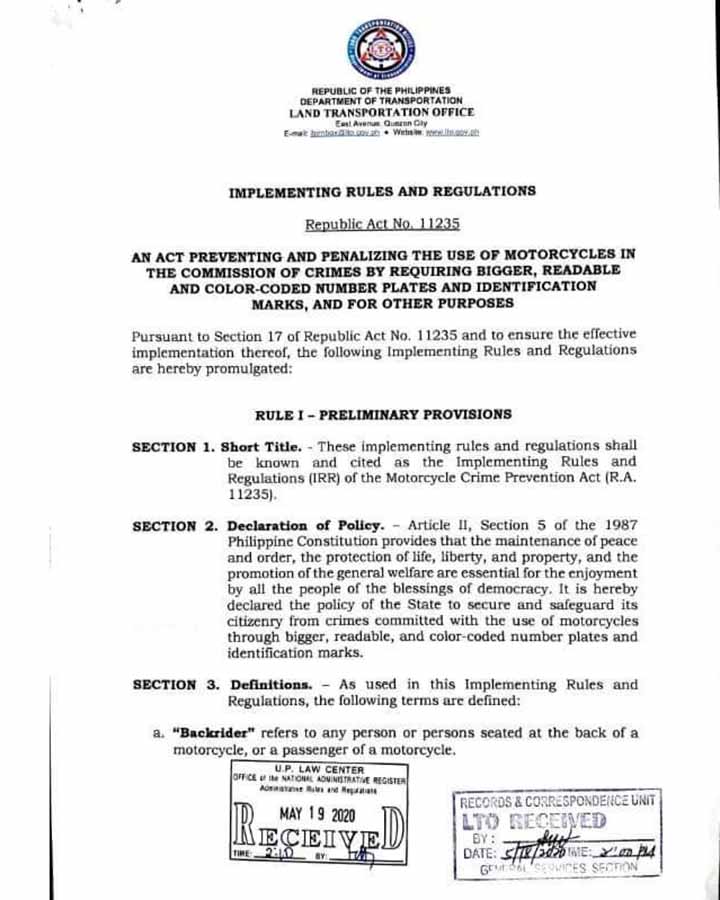 Signed by LTO chief Edgar Galvante on May 11, 2020, the 13-page IRR contained the provisions that require motorcycle owners to use a bigger, readable, and color-coded number plates (determined by region). But instead of asking the bike owners to mount a big front number plate made of metal, which had been deemed by the riders’ community as unsafe, the LTO opted for smaller front number stickers measuring 135mm by 85mm. The plate for the bike’s rear section will be 235mm by 135mm, or slightly smaller than the European license plates, but bigger than the current motorcycle plates we have locally.

More than the specs of license plates, however, the big issue is the critical provisions of RA 11235 imposing heavy penalties and jail terms for violators. These were retained in the IRR despite the President’s appeal. 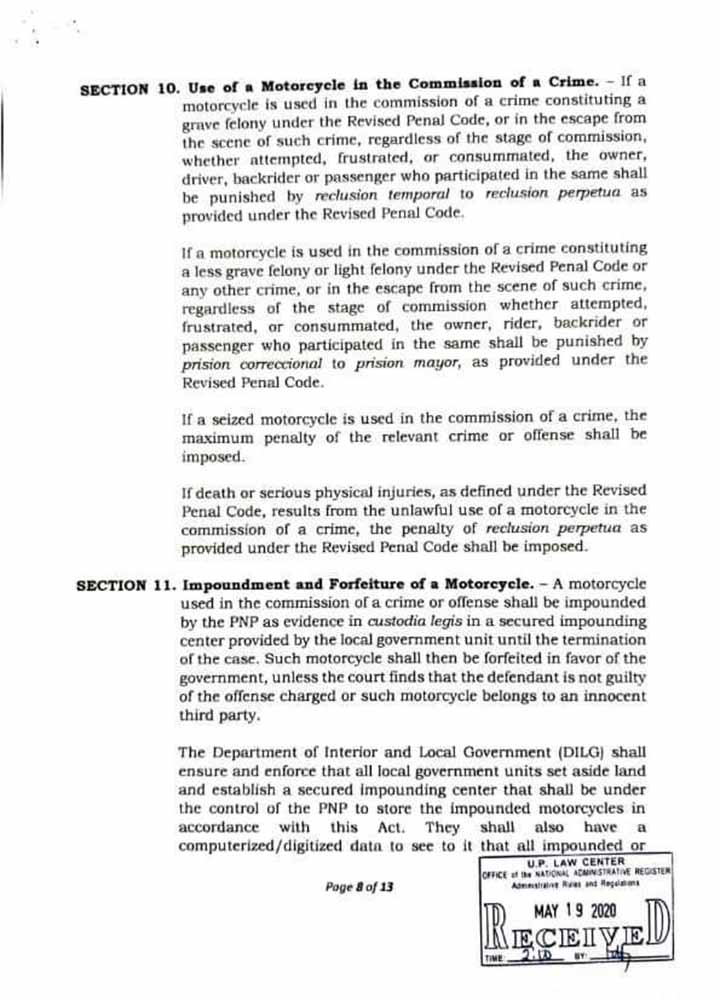 Under Section 12 of the IRR, motorcycle owners will be slapped with a penalty ranging from P20,000 to P50,000 if he fails to report within 24 hours that his number plate was either stolen or lost. This must be reported to the Joint LTO and PNP Operations Center, to which an affidavit of loss must also be submitted within the next 72 hours.

Section 13, meanwhile, stipulates that a buyer of a motorbike with erased numbers on the plate faces a jail term of prision mayor or a fine of P50,000 to P100,000. The same applies to those found guilty of erasing, tampering, imitating, concealing, or covering the plate.

Under Section 14, riders found guilty of using a stolen plate face either a jail term of prision mayor or a fine of P50,000 to P100,000, or both depending on the court’s decision.

Other provisions require the seizure of the motorcycle not only as a result of the violations mentioned above, but merely based on suspicion that it was involved in the commission of a crime.

This will likely be good news for riders, at least: Owners of impounded units will have fewer worries this time since erring law enforcers are not spared from possible liabilities based on the IRR. Under Section 9,  they face a jail term of prision correccional that might come with administrative charges if they fail to account for a seized motorcycle within 24 hours. If the unit is damaged while under their custody, the apprehending officer will be required to pay the owner of the motorbike the full amount of the unit. 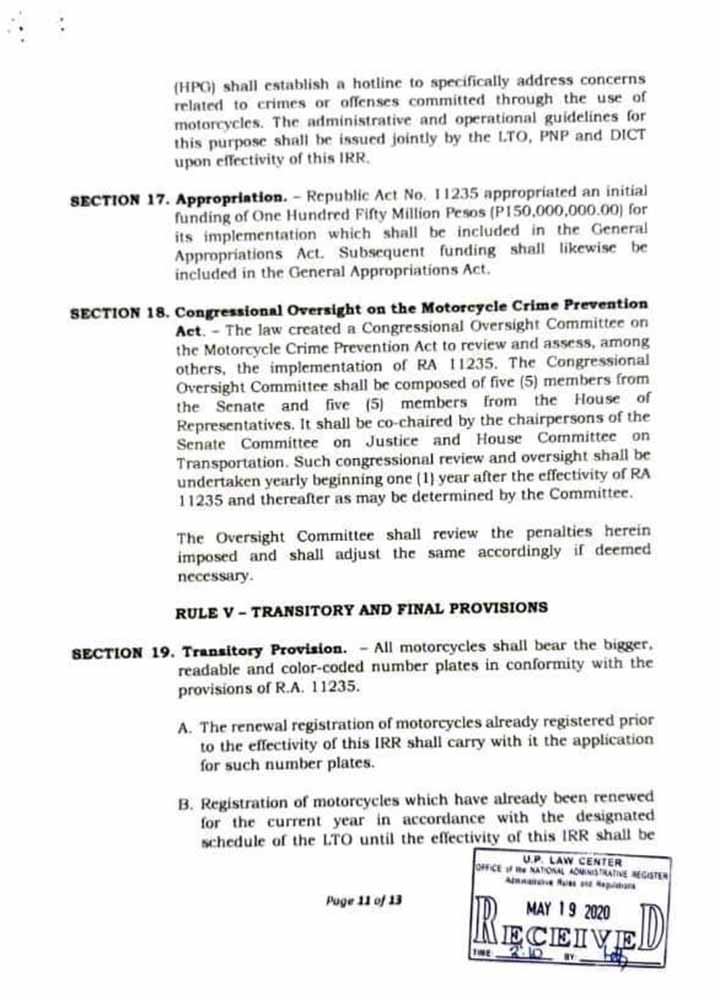 Section 15 prohibits the sale and importation of motorcycles that “do not have space for the front plate”; in this case, manufacturers and distributors “are required to provide a bracket or any other provision where the same should be installed.” Motorcycles that fail to comply will not be allowed to register at the LTO.

Riders, do you find the penalties a bit heavy or discriminatory? Well, Section 18 of the IRR requires the creation of a Congressional Oversight Committee composed of five members each from the Senate and the House of Representatives. It will be co-chaired by the chairpersons of the Senate Committee on Justice and the House Committee on Transportation, and is tasked to conduct a review and assessment of RA 11235 one year after the start of its implementation.

Also, Justitia Lex Machina, a group of lawyers who are also passionate riders, filed a petition last year before the Quezon City Regional Trial Court (RTC) questioning the constitutionality of the RA 11235. The case is still ongoing. What do you think the court’s decision will be? 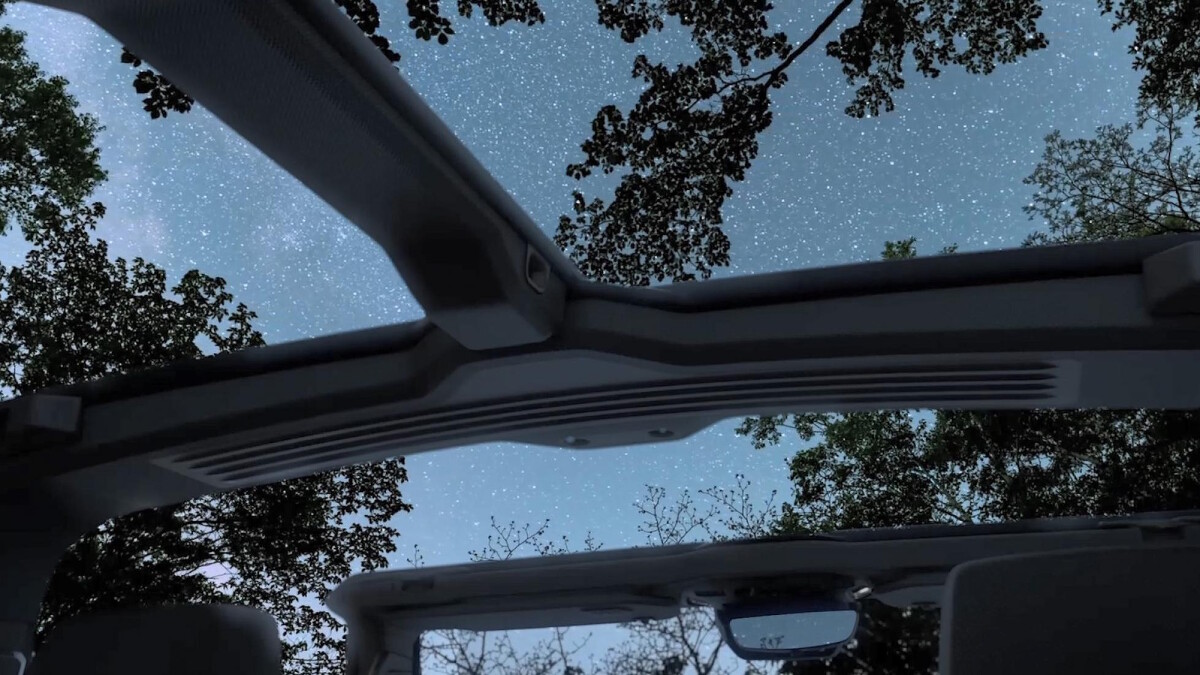 The upcoming electric Hummer will have a removable roof
View other articles about:
Read the Story →
This article originally appeared on Topgear.com. Minor edits have been made by the TopGear.com.ph editors.
Share:
Retake this Poll
Quiz Results
Share:
Take this Quiz Again
TGP Rating:
/20