What types and brands of vehicles get stolen the most in PH? 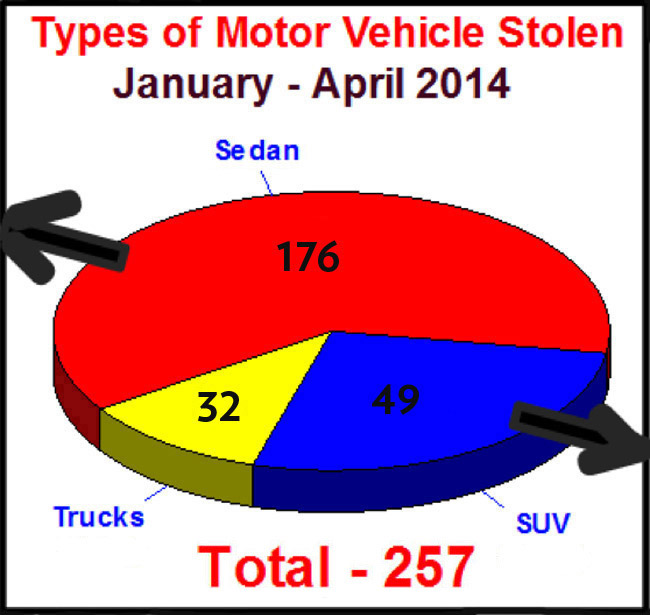 According to the latest report from the Philippine National Police's Highway Patrol Group, a total of 257 motor vehicles were reported stolen in the country from January to April this year. That's a measly figure compared to the 2,405 motorcycles reported stolen within the same period.

We wonder whether the classification of "sedans" is what it really means. Technically speaking, a sedan is defined as an "automobile for four or more people, having two or four doors." In modern times, however, "sedan" has evolved to mean a four-door car with a proper trunk, differentiating it from a hatchback or a minivan, for instance. So either there was not a single hatchback, minivan or coupe stolen in the Philippines in the first trimester of the year, or the HPG simply calls all vehicle types that are not SUVs or trucks, "sedans." Then again, there are 11 Isuzu units under "sedans," so the HPG must really be using the term to also cover other vehicle types like MPVs (the Crosswind in Isuzu's case).

As for the "trucks," we'd like to assume these include pickups.

Anyway, the HPG also included in the report the brands of the stolen vehicles.

The trucks were not broken down into brands.

So there. You now know which vehicle types and brands are popular among car thieves. But whatever your car is, it pays to always take extra caution out there.

How many cars were stolen in PH from January to April 2014?
View other articles about:
Read the Story →
This article originally appeared on Topgear.com. Minor edits have been made by the TopGear.com.ph editors.
Share:
Retake this Poll
Quiz Results
Share:
Take this Quiz Again
TGP Rating:
/20