The official numbers are in. Both the Chamber of Automotive Manufacturers of the Philippines Inc. and the Association of Vehicle Importers and Distributors have submitted their members' sales figures for the month of December and, in essence, the whole year of 2012. Now it can be told that the hierarchy was virtually maintained last year, with Toyota Motor Philippines still the runaway leader after selling a total of 65,396 units. Toyota's number includes Lexus Manila's sales. Lexus sold 370 units in 2012, a 40-percent climb from the previous year.

Mitsubishi Motors Philippines, meanwhile, is still comfortably in second place with 34,915 units, with Hyundai Asia Resources still a distant third with 21,996 units. Even much further down the order is Honda Cars Philippines with 12,653 units, closely trailed by Isuzu Philippines Corporation with 11,759 units and Ford Philippines with 10,902 units.

Columbian Autocar Corporation (Kia) made the biggest jump with a 57.4-percent growth in 2012, selling 7,527 units to close the gap between itself and the big boys.

The sub-thousand-unit club was spearheaded by CATS Motors, with a combined Mercedes-Benz and Chrysler total of 801 units. Asian Carmakers Corporation (BMW) sold 673 units, making the sporty German carmaker the leading luxury/premium brand in the country in the last 10 years. Lastly, Scandinavian Motors (Volvo) did 212 units, and British United Automobiles (Mini) settled for 166 units. 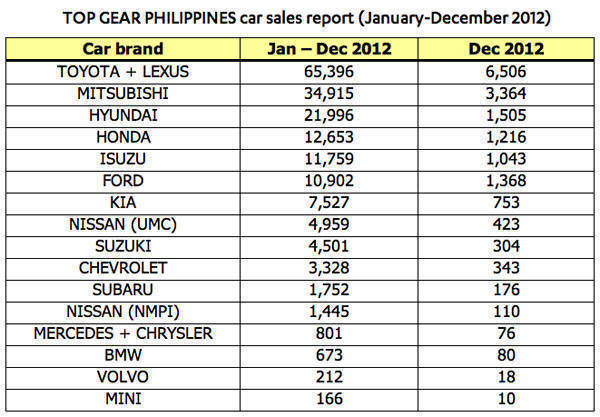 Kia PH increases annual sales by 57%, hints at new models for 2013
View other articles about:
Read the Story →
This article originally appeared on Topgear.com. Minor edits have been made by the TopGear.com.ph editors.
Share:
Retake this Poll
Quiz Results
Share:
Take this Quiz Again
TGP Rating:
/20