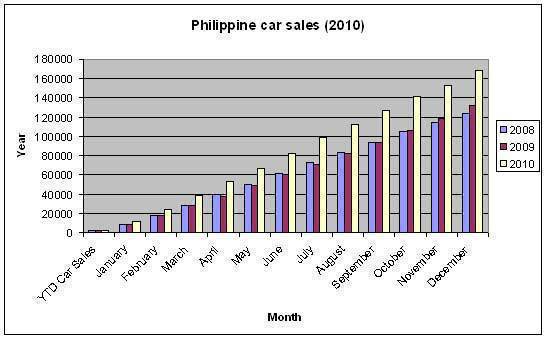 Availability of more units and better access to financing allowed the Philippine automotive industry to post a record in car sales last year, the Chamber of Automotive Manufacturers in the Philippines (CAMPI) said.

Missing numbers?
It must be noted, however, that CAMPI's latest report no longer includes the sales made by Focus Ventures, Hyundai Asia Resources, The Covenant Car Co., and Scandinavian Motors. Hyundai has bolted CAMPI, and the other carmakers were also reported to have followed suit. The data also do not include the sales of Subaru vehicles as its distributor, Motor Image Pilipinas, is not a member of the industry group.

Counting sales from Hyundai, which sold 2,016 units in December, the industry would have finished the year just within the 170,000-unit mark.

Top finishers
Toyota is still the number one brand in the country with top-sellers like the Vios and the Innova. The Japanese carmaker sold a total of 56,855 units to corner 33.7 percent of the Philippine market in 2010.

Mitsubishi Motors Philippines ranked second with 2010 sales reaching 32,422--39.5 percent higher than its sales in 2009--with the continuous popularity of the Montero Sport and the launch of the new ASX crossover vehicle.

Even without its December figures in CAMPI’s report, Hyundai still closed 2010 on the third spot. The Korean brand's total sales stood at 20,712 units with the boost coming from the Tucson, Grand Starex and Santa Fe, as well as the newly-launched Accent.

More flexible export requirements for carmakers proposed
View other articles about:
Read the Story →
This article originally appeared on Topgear.com. Minor edits have been made by the TopGear.com.ph editors.
Share:
Retake this Poll
Quiz Results
Share:
Take this Quiz Again
TGP Rating:
/20