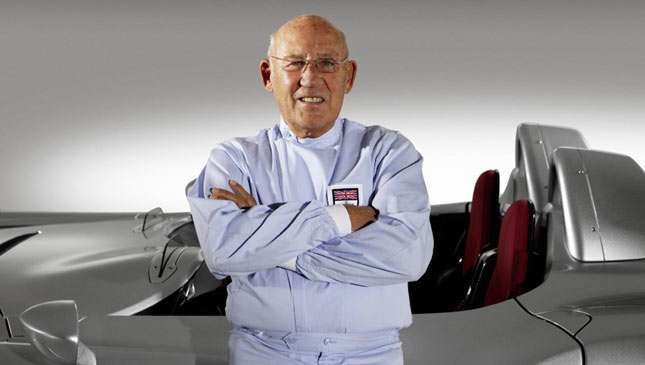 Sir Stirling Moss has been battling a chest infection since holidaying in Singapore in late 2016. The news that he has finally decided to retire from public life, aged 88, isn't wholly surprising. Lord knows, if anyone has earned a bit of respite and the close attentions of family in his twilight years, it's Stirling.

That said, I suspect it's something he's agreed to reluctantly: There have been times during his remarkable life and career that he’s appeared almost superhuman—both in a racing car and outside it. Such is his status that he's more in demand than ever. Imagine trying to tell Stirling Moss that, yes, it really is time to slow down…

Plenty might reasonably wonder why the man still matters quite so much. Only because he's probably the greatest British racing driver of them all—or the embodiment of what a great racer should be—an opinion made all the more trenchant given that Moss never actually won the Formula 1 world championship.

But it's worth spending a little time looking at what he did do, and the artful, extraordinary way in which he did it. The greater the distance from motor racing's so-called 50s and '60s 'golden' era, the more magical Moss and his comrades' skill, achievements, and attitude to life seems. This was an era when drivers traveled the world, often together, raced everything they could get their hands on, and did so knowing full well that one or more of them might not be around the following weekend. "I had his autograph, as a young boy. And still have it," Sir Jackie Stewart says.

"World War II was still fresh in people's minds and that made a big difference," Stirling once told me. "At that time death was quite common, we'd lost God knows how many people in the War. So if somebody was killed doing something, well it was unfortunate but the view was that it happens. Now it just wouldn't be tolerated. I lost a lot of friends racing and it was awful.

"The only way one could accept it was to say, they knew the danger, I knew the danger, I loved it and they were loving it and they died doing something they loved. That's how you make yourself accept a difficult situation. I mean there was nobody else in the car holding your foot down. I didn't want to die, I had no death wish. I thought I would drive as fast as I feel safe and that was my limit."

Fortunately, his limit was rather higher than most. I was lucky enough to spend proper time with Stirling at various points in the past decade, exploring different parts of his career, listening to his stories. He was, and remains, insightful, charming, a little rogueish, perhaps, and a whole lot raconteurish. The statistics show that he won 16 of the 66 Grands Prix he competed in, a total of 212 out of the 529 races he started, in 85 different classes. Look harder, though, and you'll discover two of the greatest drives of all time: 1955's win in the Mille Miglia, in 10 hours seven minutes, and the 1961 Monaco GP, during which he held off three hard-charging and superior Ferraris in his Lotus 18. Here’s just a taste of what he told me:

"The Mille Miglia was the only race that really frightened me, at least until the moment the flag fell. There were hundreds of cars participating, although I didn't have to overtake them because half of them fell off. Italian hairdressers you see, with go-faster stripes.

"I remember going over a hump-backed bridge. Jenks [his co-driver] had given me the signal that it was okay. Well we went over this damn thing at 241 or 258kph. In practice, you see, we probably hadn't gone any faster than 193kph. Well, at 258kph we took off and the bloody thing was flying. It was a dead straight road, but I knew it was a bit dodgy. We were airborne for quite a few seconds. The steering obviously went a bit light… and we landed and Jenks and I looked at each other and just went [quizzical expression crosses his face]. We certainly had our moments…

"Is it my greatest achievement? Of its type, yes I suppose so. You can't really compare it with, say, when I won the Monaco GP in 1961. It's about confidence. You have to be confident in your car as well as your own ability. I was 25 years old at the time, and terribly fit. I never did any exercise but I'd be racing three days a week. It added up to something like 250 days a year competing in a car." 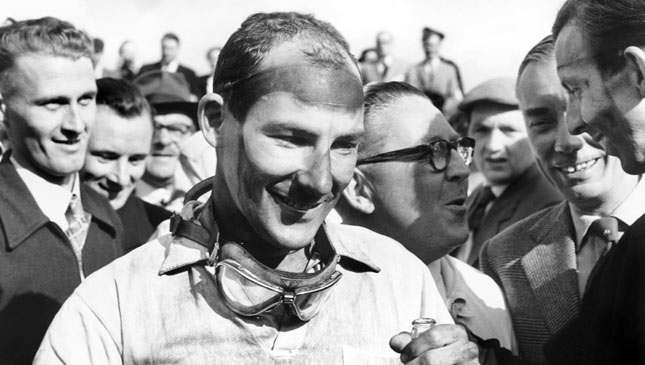 He was patriotic, and choosing to drive for British teams and privateers when they were uncompetitive hurt his progress. He could—and should—have won the F1 title in 1958, when fellow Brit Mike Hawthorn had apparently driven his Ferrari the wrong way on the track during the Portuguese GP. It was Moss who defended the move, allowing Hawthorn to keep his second place finish, which meant he went on to win the driver's title that year by a single-point margin… Instead, Moss was destined to finish second in the F1 title race four times, third a further three. A true sportsman, as well as a hero.

He was set to drive for Ferrari—Enzo Ferrari had courted him assiduously, and was prepared to make significant concessions to get him—when a crash at Goodwood on April 23rd 1962 left Moss in a coma for a month, and partially paralyzed for many more. During a test a year later, he knew the game was up.

Moss is also associated with many of the greatest racing cars, his name alone conferring monumental value on them amongst collectors. In sports cars, they include the Jaguar C and D-Type, Mercedes 300 SLR, Aston Martin DBR1, and the Ferrari 250 GT SWB; in F1, Cooper, Maserati (in the 250F, as a privateer), Mercedes-Benz (in the W196), Vanwall Lotus, BRM… And in each of them he had a rapport that only the very, very best ever command.

"One has to be able to speak the language of a car, and that certainly makes a difference between one driver and another," he told me in 2009. "I could speak to cars and get what they were saying fairly easily, and I drove a lot of different cars so I became very experienced at it.

"If a driver has to call on bravery, then he is in the wrong business. The strain on the individual would be enormous if you felt that you needed courage to get through every corner."

TopGear.com sends its very best to Sir Stirling, Lady Susie, and to the Moss family. Get well soon, Stirling. 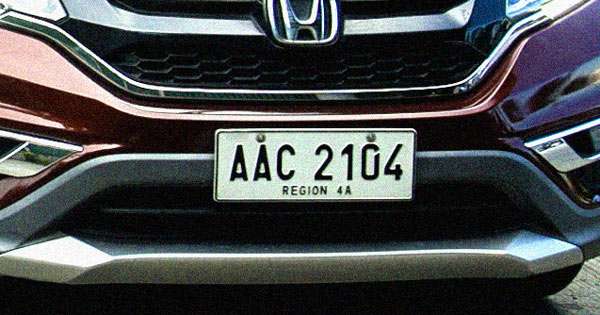 Report: TRO preventing release of 700,000 license plates lifted
View other articles about:
Read the Story →
This article originally appeared on Topgear.com. Minor edits have been made by the TopGear.com.ph editors.
Share:
Retake this Poll
Quiz Results
Share:
Take this Quiz Again
TGP Rating:
/20