Find out why it holds the record as the world's fastest production bike
Jul 19, 2009
CAR BRANDS IN THIS ARTICLE 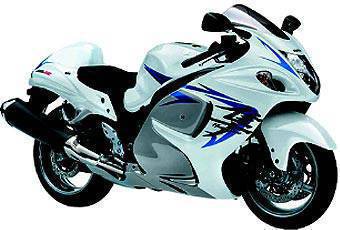 The country's local motorcycle riders might be in for a rude awakening as Suzuki Philippines, Inc. recently launched the Suzuki Hayabusa, which has been recognized by Guinness World Records as the "fastest production bike in the world."

In the Philippines where underbone bikes practically rule the streets, the Suzuki Hayabusa is the ultimate sport bike, capable of reaching a top speed of 317kph.The Hayabusa is powered by a 1340cc inline four-cylinder fuel-injected liquid-cooled DOHC engine and Suzuki said it "is built to deliver a broad wave of torque for effortless acceleration."

The Hayabusa uses a number of proprietary Suzuki technologies that help this hyper bike achieve its record-setting speed. It has the Suzuki Dual Throttle Valve (SDTV) fuel injection which results in improved power delivery to produce a more linear response, the Suzuki Clutch Assist System (SCAS) that serves as a back-torque-limiting system for smoother downshifts which also contributes to a lighter clutch pull, and the Suzuki Drive Mode Selector (S-DMS) that enables the rider to choose from three different power characteristics.

Advanced aerodynamics in the Hayabusa's design also offer its rider wind protection for both normal and completely tucked-in seating positions.

The bike's fully adjustable spring preload, compression and rebound damping for both the front forks and the rear, single shock absorber promise to keep riders comfortable even at high speed.

The Suzuki Hayabusa sells for P849,000 and is available in black and white colors.

The Hayabusa was one of the big bikes on display when Suzuki launched its latest Raider lineup in January. Suzuki marketing manager Benedict Martin Arreola said back then the big bikes will be in the Philippines by the fourth quarter. Other models which we may soon see on local roads are the BKing, a street bike; the VStrom DL650, a mid-weight sport bike; and the Burgman 400, a touring scooter.

Toro Rosso dumps Bourdais
View other articles about:
Read the Story →
This article originally appeared on Topgear.com. Minor edits have been made by the TopGear.com.ph editors.
Share:
Retake this Poll
Quiz Results
Share:
Take this Quiz Again
TGP Rating:
/20