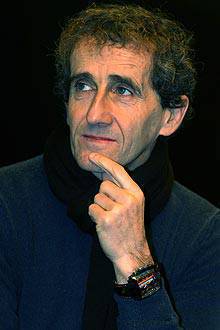 "I've been a friend of TAG Heuer since my earliest days in F1 and we have worked very closely when I drove for McLaren. It's a privilege and an honor to be back by being associated with Lewis and Jenson to commemorate their 150 year-long contribution to motorsports,"’ said Prost.

The highly-respected French racing driver was wearing TAG Heuer colors and chronographs when he won three of his four Formula 1 driver's titles in 1985, 1986 and 1989.

The second most prolific winner in F1 history, Prost won 51 of his 202 races victories, captured 33 pole positions, set 41 best laps and took 106 podium finishes in 199 races between 1980 and 1993. Though his smooth, relaxed driving style earned him the nickname "Professor," it was his intense competitive edge that won him the respect of fellow drivers and the admiration of motorsports fans around the world.

In 1999, Prost was honored as one of the 11 winners of the World Sports Awards of the Century alongside Pelé, Muhammed Ali, Michael Jordan and Steffi Graf.

"We are delighted to have Alain back in our team," said TAG Heuer president and chief executive Jean-Christophe Babin. "He represents one of our longest-standing relationships in motor racing. We backed him during one of the truly golden period of Formula One, when he was battling it out with Ayrton Senna, another prestigious F1 brand ambassador. Later, we supported him in the Andros Ice Race as we will do again in 2011. Now he’s back to help Lewis, Jenson and the whole TAG Heuer motor-sports partners to celebrate our 150 years of Mastering Speed."

Political satire on YouTube takes aim at PNoy's Porsche
View other articles about:
Recommended Videos
Read the Story →
This article originally appeared on Topgear.com. Minor edits have been made by the TopGear.com.ph editors.
Share:
Retake this Poll
Quiz Results
Share:
Take this Quiz Again
TGP Rating:
/20