TG Conference 2010: We get reminded of James May's prank

We'd heard this story before, but for some reason completely forgot about it. We got reminded of it again during the just-concluded Top Gear magazine conference in Hong Kong, when Top Gear managing director Adam Waddell enthusiastically recounted it. Waddell was telling us about one of the brand values of Top Gear--"mischief"--when he promptly called to mind James May to better illustrate what he was saying.

You see, before becoming extremely popular on our favorite motoring TV show, Captain Slow--just like us car-magazine editors--had been a print motoring journalist. In fact, he had been under the employ of Autocar magazine. In 1992, he was in charge of putting together the publication's annual "Road Test Yearbook," a task that May now says he found extremely boring and tedious.

To help break the monotony, May used a little prank. He carefully designed the supplement layout such that the drop letters (consisting of all the big, bold first letters of the articles) actually spelled out a sentiment if you strung them together. Unfortunately for him, some eagle-eyed reader spotted the subliminal message and this reached the attention of the Autocar management--which ultimately cost him his job.

What was the hidden message? As you can see from the photo below, James May's cleverly arranged drop letters read, "So you think it's really good, yeah? You should try making the bloody thing up. It's a real pain in the arse."

I just sincerely hope none of my editors would feel mischievous enough to pull off something like this under my watch. 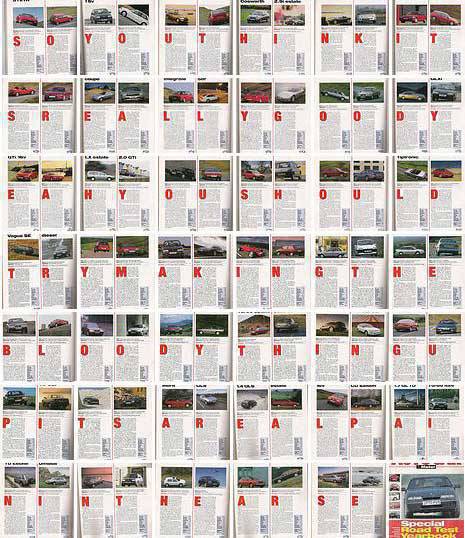 TG Conference 2010: Preview of Top Gear USA shown
View other articles about:
Read the Story →
This article originally appeared on Topgear.com. Minor edits have been made by the TopGear.com.ph editors.
Share:
Retake this Poll
Quiz Results
Share:
Take this Quiz Again
TGP Rating:
/20