by Patrick Everett Tadeo | Mar 20, 2009
The global economic recession has claimed yet another victim in the automotive industry.

The weak economy and the poor attendance records for the past shows prompted the Society of Motor Manufacturers and Traders (SMMT) to cancel the 2010 British Motor Show. SMMT has been the show's owners since 1903.

"SMMT, with the support of the UK motor industry, remains committed to showcasing the achievements and products of the automotive sector. However, the economic downturn and unprecedented challenges facing the industry both in the UK and around the world have made it impossible to commit to a 2010 event," a statement posted on the British Motor Show website said.

The British Motor Show was once a viable event, attracting as much as 900,000 visitors when it was held in Birmingham in 1978. Recent shows, however, struggled to draw half a million visitors even after the show was relocated to London in 2006 in a move to boost attendance.

Attractions like stunt shows and rock concerts, aimed more at families than motoring aficionados, received a lukewarm response from fans who felt the event became more of a theme park than a motoring show.

In the 2008 British Motor Show held at the ExCeL Exhibition Centre in London's Docklands from July 23 to August 3, the absence of established brands drew considerable notice as gaps in ExCeL's floor plan was evidently covered up through the use of full-lengths curtains, extra seats and potted plants, with Mercedes-Benz being the only German brand present while Volvo, Aston Martin and Fiat were no-shows.

Other major international auto shows have also shown a considerable decline in attendance from car manufacturers. The 2009 North American International Auto Show in Detroit felt the absence of Porsche, Ferrari, Land Rover, Rolls-Royce and Nissan, for example, while reports in January suggested that organizers of the Tokyo show were considering on canceling the event following an announcement from Ford, GM, Chrysler and Volvo that they would be absent from the said show. 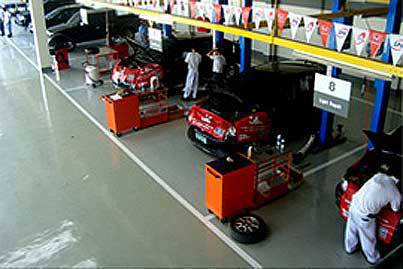 Honda opens new service and parts center
View other articles about:
Read the Story →
This article originally appeared on Topgear.com. Minor edits have been made by the TopGear.com.ph editors.
Share:
Retake this Poll
Quiz Results
Share:
Take this Quiz Again
TGP Rating:
/20