One year later with my daily driver 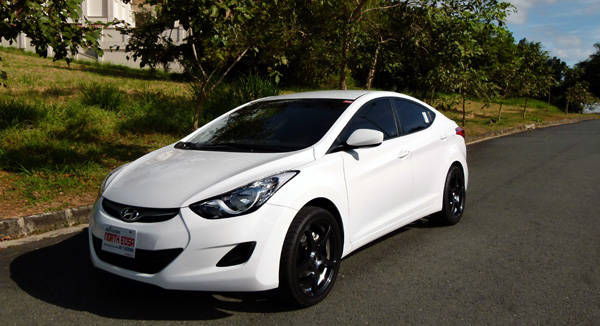 Choosing a "daily driver" can be one of the hardest decisions to make. Coming from a Mitsubishi Galant and Honda Accord past (back when they weren't priced above a million bucks), inflation had limited my choices for my next daily driver to the compact-sedan range. The car would be used for getting to and from work, family days and occasional out-of-towners. After trying the Chevrolet Cruze (solid build, but slow), Toyota Altis (nice, but made me feel old) and Honda Civic (I felt the old FD was better), I settled for the Hyundai Elantra.

I liked the swoopy body, decent equipment spec, huge trunk and smooth 1.6-liter engine. I also decided to go back to basics with the six-speed manual, since the unit had close gear ratios, a smooth clutch and a precise feel. As much as I liked the extra toys of the 1.8--like the better stereo, rear disc brakes and foglamps--I figured I could always upgrade later on. Well, maybe except for the rear discs. But then again, I wasn't planning on doing track days with the car.

As this was my first try at a Hyundai, I was a bit of a skeptic when it came to reliability. But asking friends who owned Hyundais reassured me that it would be no more complicated to maintain than the average Japanese sedan. So I made the leap and got one in "Creamy White," a very flattering color for the car that (strangely) wasn't available in the more expensive 1.8-liter variant.

The car wasn't a month old with me when I decided to put some of the savings gained from forgoing the 1.8 into a better wheel-and-tire package. So I went over to Wheel Gallery and was quite overwhelmed with their selection. No less than its managing partner, Sam Liuson, picked the Concept One five-spoke, faux-carbon wheels for me and paired these with 45-series, 18-inch Nitto NeoGens. Then I belatedly informed my wife, who amazingly did not rip me to shreds for signing off on the purchase without her consent. Perhaps it was the spirit of Christmas.

Aside from giving the car an even sportier look that the small, stock 16-inchers lacked, the new setup improved the car's steering and handling feel. With the possible exception of the Genesis Coupe, Hyundais are notorious for an antiseptic steering feel, and the bigger tires solved this a bit by adding a little more road feedback through the steering wheel while adding much more grip compared to the stock eco-tires.

The new wheels weren't even three weeks old when I hit a particularly bad rut one night, denting the front and rear rims on the driver side. Fortunately, Wheel Gallery repaired the damage and got them looking like new again.

All was happy and peaceful until I got word of Speedlab's Power Package. Now, many people may be comfortable with the idea of having someone fiddle with their engines for a little more power, but I've honestly never tried it myself. But the allure of several more horsepower was a little too much to resist, so I turned over the car to Speedlab's Ferman Lao, who is also Top Gear Philippines' technical editor. Plus, Ferman assured me that they would fix anything they would break.

A week passed, and no word came from the shop. I texted Ferman about the car and got a reply saying that they were still tweaking it. Hmm. About the time I was beginning to have serious second thoughts, Ferman finally told me to come over and get my car. 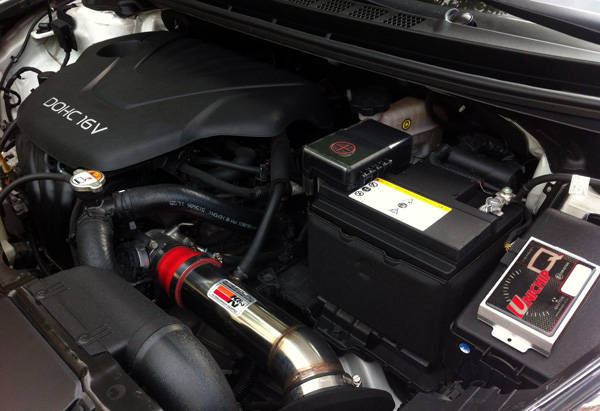 If you've never been to Speedlab and have seen movies like The Fast And The Furious, you'll like their place. It's an obscure warehouse in Banawe, away from the main road and having a "skunk works" feel. Ferman gave me the key, and then he showed me some interesting screenshots from their dyno tests. In stock form, the 1.6 put out 100 wheel horsepower (whp), pretty standard stuff. With the Speedlab bits of a K&N cold air intake, 4-2-1 "Hot Pipes" and a Unichip, the car put out 122whp. More importantly, the car made a lot more torque between 2,000-4,000rpm, the range I mostly use. The resulting sporty growl of the headers was a nice bonus. The changes to the engine reminded me of the Honda Civic SiR, but with more "meat" in the midrange. The car feels much punchier now and positively eats up open roads, while the stock exhaust means it's nearly as quiet as before.

I splurged on fully synthetic oil at the 5,000km service and experienced the professionalism of the service crew at Hyundai North EDSA. No complaints at all. The only hiccup was some valve-train clatter, possibly from a bad batch of Petron Unleaded.

Ferman advised me to use Shell V-Power Nitro+ Racing, and I was floored by the smoothness of that premium fuel. Unfortunately, it's also quite pricey. So, for the usual city and highway driving, I just settle for Shell Unleaded. The felt engine response isn't quite as quick as with the Nitro+, but it's good enough for everyday use.

One thing I'm continually happy with is the fuel efficiency. Even accounting for occasional "Italian tune-ups" to clear out the carbon and enjoy the extra power, fuel economy is in the mid 10 to high 11km/L range. Other, more patient owners can probably get a better figure.

As for any durability issues, there are none. My friend, who also bought an Elantra (albeit the 1.8), is also quite happy with the car. After complaining of some rattling with the front suspension, Hyundai Central EDSA replaced the rack-and-pinion assembly under warranty. As for myself, between the base car and the wheel/tire/engine upgrades, I'm just happy to have a daily driver that's also quite a lot of fun to play when traffic clears up. The car has gotten a few light scratches over the past 12 months, though. The first one is always the most painful, no?

Next upgrades? Aftermarket shock absorbers to reduce some of the floatiness at speed and a strut tower bar!