You won't experience marital bliss if you have a car like this. It steers itself to places like Hooters.
Jan 19, 2009
CAR BRANDS IN THIS ARTICLE 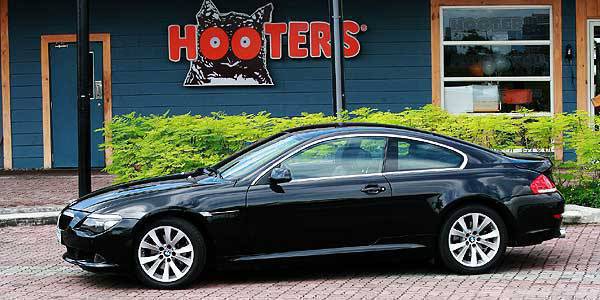 I've driven a great deal of cars in my lifetime, and I've seen exactly what they're good for. Pickups make me look industrious and tough. Sedans make me look simple and safe. SUVs make me look powerful and dependable. Minivans make me look steady and responsible. You see, all of these vehicles exude a certain aura that tells women you're qualified to be considered as a potential husband.

Coupes automatically scratch you off the list. Especially if it's a visually overwhelming number like the BMW 630i Coupe. Nothing about this car indicates the owner is the marrying type. Everything about it unequivocally tells women you're out to chase skirts and break hearts. Trust me: I've tried it for one weekend (the car, not the skirt-chasing and the heart-breaking).

The BMW 630i Coupe is long--very long. It's long in a way that doesn't look like the owner is merely compensating for a certain physical inadequacy. It's long in a way that intimidates the observer and--if said observer is female--convinces her that everything about the owner is, well, really long. Such is the car's overall length that I found it to be quite a challenge to gauge the spatial allowance up front every time I parked. If you're not very careful, you'll often find yourself grazing the low, expensive chin over parking curbs.

The good thing is that it has a scandalous system of parking assist, which wails at the slightest hint of an object that threatens to give the front or rear bumper a dent. If you fancy yourself to possess the parking accuracy of a professional car jock, you can always push a button to stop the shrieking.

A couple of facts instantly leap at you at the mere mention of "630i Coupe." First is that this variant is the base model, with a 3.0-liter, 272-horsepower straight-six under its hood. That's the lowest power source available in the 6-Series range. It's so base, in fact, that the standard alloy wheels measure a mere 17 inches. And this is a menacing German sports coupe we're talking about. Even the top-model Mitsubishi Lancer has 18-inch wheels these days.

On the highway, get even better figures by using the cruise control. It is easy to operate and is a handy feature on boring and hypnotic roads like the SCTEX.

The second fact is that this very unit, being a coupe, has a fixed hard top. A convertible version is available, but it costs much more. As a resident in a tropical and polluted country, I'm all for fixed roofs. I still don't see the point of dropping the top just so you can inhale the black fumes of the rickety bus in front of you.

The 6-Series we have now is already the second generation after the E24 line made by BMW from 1976 until 1989. This modern iteration was first introduced in 2003, with the 630i model arriving some two years later. Google a photo of the old 6-Series and you'll see what an interval of 14 years can do. The old one might still be considered for use as a bridal car; this new one is what you crane your neck for from inside a bridal car. Its shape makes married men wonder if they're missing a lot.

The hood is expansive. You can promise your date some fine dining and proceed to use the hood as a table. It's that wide and it's that long and it's that horizontal. The roof slopes drastically front and aft, so much so that the Hofmeister kink on the C-pillar is nearly unrecognizable. The windows are frameless, and the trunk lid opens to a cavernous cargo space.

The door handle senses the proximity of the high-tech key and opens the door automatically without you having to activate keyless entry. The door sills are elegantly adorned by BMW--labeled garnishes that light up when you open the doors. There's a slot for the key on the steering column, but I don't quite get why this is still necessary. I was able to fire up the engine by pushing the start button even with the key tucked safely away in my pocket.

There's nothing truly fancy about the dashboard and the instrument panel. Well, you're familiar with the menu: two main gauges for the speed and the engine revs; iDrive knob and monitor; aircon vents and controls; a CD slot and audio controls; and a few other buttons here and there. The seat material is good-quality leather. An iPod auxiliary port is hidden inside the stingy center console that doubles as an armrest. Behind this is another small compartment that houses the one and only cupholder inside the car--which took me a while to locate so my date strained her hand holding her beverage. Like I said, this car isn't good for convincing a girl to marry you.

What it's good for is impressing a casual lady--either with its mere appearance or with its sheer power. Engine muscle is more than adequate for me. It sure didn't feel like base-model. Then again, I might simply be such a slowpoke. But when you're able to reach 100kph from a standstill in 6.5 seconds--in Metro Manila even--there's nothing much to complain about. The engine will propel you all the way to a top speed of 250kph anyway.

Our unit came equipped with a six-speed automatic gearbox that worked with stylish paddle shifters. The good thing about this transmission is that when it's in sports mode, it really does allow you to do the shifting yourself. It doesn't override your gear inputs, except when you're crawling very slowly and you mindlessly forgot to downshift to second gear. But try to overtake in second gear, stay there a bit and squeeze all the power from it, and the system will not upshift by itself to third. The system has a lot of faith in you. It probably even thinks your name is Robert Kubica.

I did find the paddles, however, to have been positioned a bit too deep off the rim of the steering wheel. It was a little difficult toggling them with what I'd thought were long fingers of mine.

My main beef with this car is the scarcity of available space inside. Slinking into the driver's seat is always a workout. Speaking of fixing yourself in the cockpit, I missed the robotic arm that politely extends the seatbelt to you so that you don't have to reach far back for it. This feature is available on newer BMW coupes.

2008 Toyota Corolla Altis 1.8V review
View other articles about:
Read the Story →
This article originally appeared on Topgear.com. Minor edits have been made by the TopGear.com.ph editors.
Share:
Retake this Poll
Quiz Results
Share:
Take this Quiz Again
TGP Rating:
/20