Is the A35 hot hatch a worthy bearer of its Mercedes-AMG badge?

We drive the entry-level ‘real AMG’
by TopGear.com | Dec 9, 2018
CAR BRANDS IN THIS ARTICLE

The Mercedes-AMG A45 sold about twice the number its maker expected, but on the other hand, it sits on a high and inaccessible shelf. This A35, on the other hand, is AMG’s diffusion line, the entry-level ‘real AMG’ that sits midway between the full-fat A45 and the watered-down A250 AMG Line. 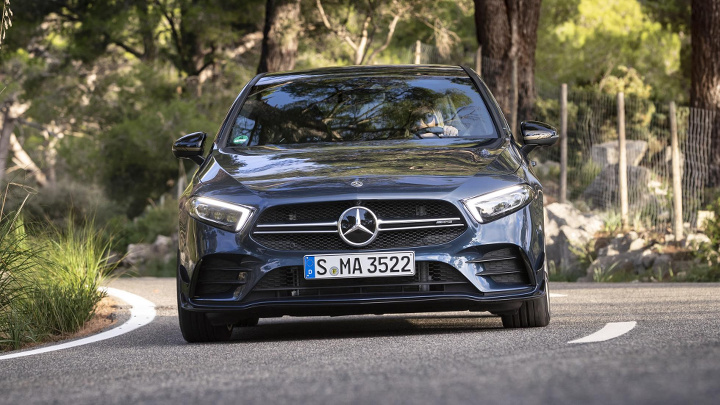 That territory, even by hot-hatch standards, still demands pretty big spec. So the A35 fields a 306hp engine and four-wheel drive. It’s tempting not just for the mechanical specs, but also for the brilliant interior quality.

But bear in mind that this is an A-Class, and there’s zero chance of going on the configurator without clicking the boxes for the signature IMAX dash, available in three upgrade states culminating in the world’s biggest and most configurable heads-up display. 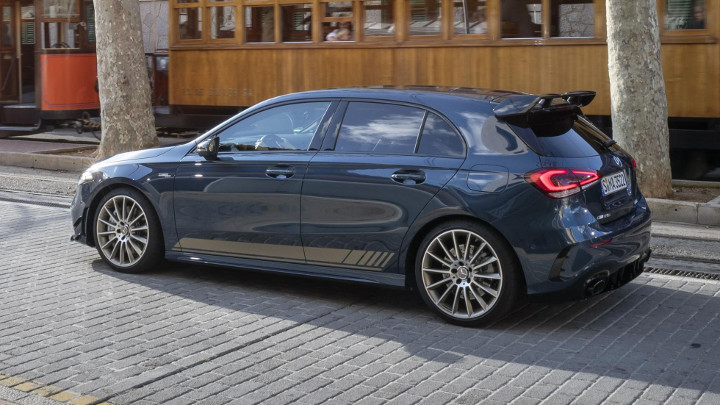 You can have the car in yellow paint with an optional aerodynamics pack of rear rooftop wing, a bladed diffuser, and corner flicks at the front. It’s actually functional, and my, how you’ll be the toast of the track-day pitlane. Albeit a bit of laughingstock where actual mature and tasteful humans gather. Or you can do without the kit and go stealthy in dark-blue or gray. The A35 will still look pretty meaningful, stanced down on wide-set wheels that go up to 19 inches.

The engine’s not entirely a pure AMG unit, having its roots in the A250 motor. Still, it’s modern enough. The transmission is a seven-speed dual-clutch unit, with AMG-specific gear ratios and software to sharpen up the shift times. The four-wheel-drive system operates on a maths-based torque model. In other words, drive goes to the rear not just when the front wheels start to slip, but in anticipation of that. Among the calculation’s input are how hard you’re going at the throttle and the steering, the gear you’re in, and other chassis variables.

Suspension modifications are far more than cursory too. Deep breath...the steering is solid-mounted to the body and has its own ratio; the front wishbones have solid joints, not rubber bushes; the front uprights are different; and the brakes are big discs with four-piston monobloc calipers from the A45. A stamped plate is bolted under the engine to keep the suspension mounts more stiffly located. At the back, the subframe is solid-mounted rather than bolted through bushes. The springs, the dampers, and the anti-roll bars are all specific.

It’s a long list of changes and we’ve not been complete, but this is enough to show that Merc-AMG was serious about making its A35 more precise as well as grippy. The claim is it’ll corner and stop as well as the A45. If not accelerate as hard.

It might not be as quick as the A45, but still, 0-100kph in 4.7sec is hardly shabby is it? The engine is pretty keen to shake off any off-boost lethargy, summoning most of its 400Nm from way below 3,000rpm, then giving that full total—with only slight lag—once the needle has swung beyond that. It’s well up for any trip to the redline, albeit that comes to a halt at 6,500rpm. 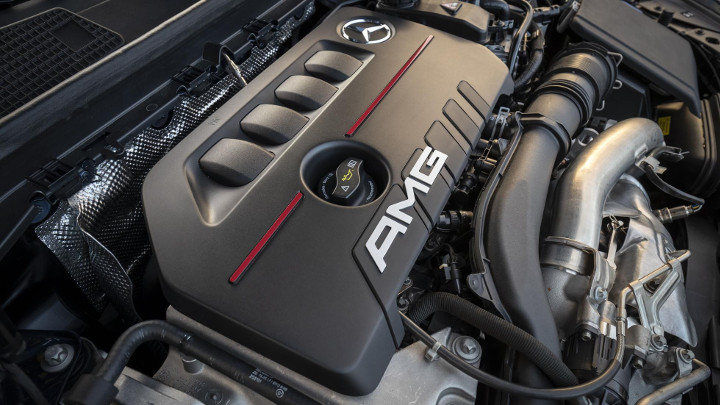 The predominant aural effect is less AMG GT and more AEG vacuum cleaner. That said, it’s smooth enough and there’s a bit of encouraging exhaust growl further back in the mix.

As with most dual-clutch transmissions, you can trick the box into a hesitant fluff with a downchange it wasn’t expecting. But mostly, it’s usefully snappy in answering either throttle requests or paddled shifts. The ratios are well-chosen, too, avoiding the all-too-common German-car yawning chasm between second and third.

Look at the tires, the spec, and the measures taken to adapt the chassis to AMG purposes, and as you’d expect, the A35 turns out to be a precise and grippy machine. That applies through pretty well any corner and any condition. Unless you yank it unsympathetically into slow, sharp bends, it’ll turn in pretty eagerly and stay neutral as you power through, especially in the Sport setting, which is keener to send drive rearward. You’ll never run out of traction as you rocket out.

But it has comprehensively lost the AMG hooligan gene. The steering is drably mute, and while the chassis does have some seat-of-the-pants feel, it certainly isn’t reactive to throttle input. It’s secure and very quick, but it’s a bit aloof. Which paradoxically tempts you to go a bit faster that you should, just to find the involvement. 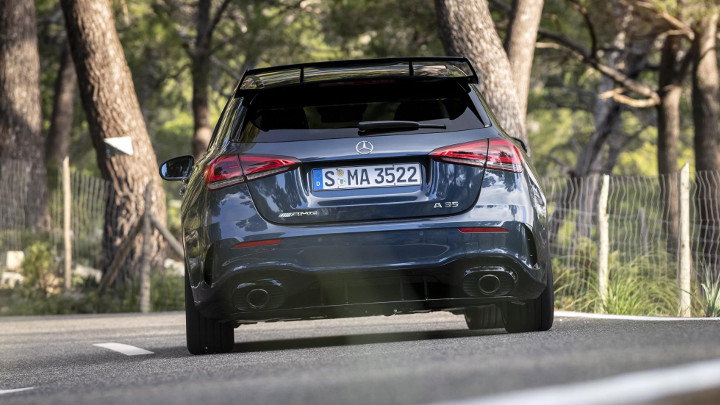 If you really want the absolute minimum of involvement, well, Mercedes keeps adding to its driver-assist systems. At the time of its launch, the A35 has—if you tick the boxes—about the most comprehensive array of any European car.

Of course it’ll pretty much steer down a highway. More unusually, it’ll adapt its cruise speed to the corners and junctions the map knows are coming up, even as tight as roundabouts (and yes, it takes them more vigorously if you’re in Sport mode). It will self-park in all manner of orientations, doing not just the steering but also the braking and the direction-changing. It steers away from oncoming traffic if it thinks you’re too close. And we like this bit: The blind-spot warning finds not just vehicles but bicycles, too.

Trouble is, these have all sorts of subtle, sometimes counterintuitive and hard-to-learn conditions for activation and override. The technology is dazzling and the intent noble. But it often feels like the car has a mind—and a perverse mind at that—of its own.

Even if you don’t fork out your retirement fund in options, AMG adds cabin fitments to lift the A35’s interior beyond even the standard A-Class’s superbly rich cabin. 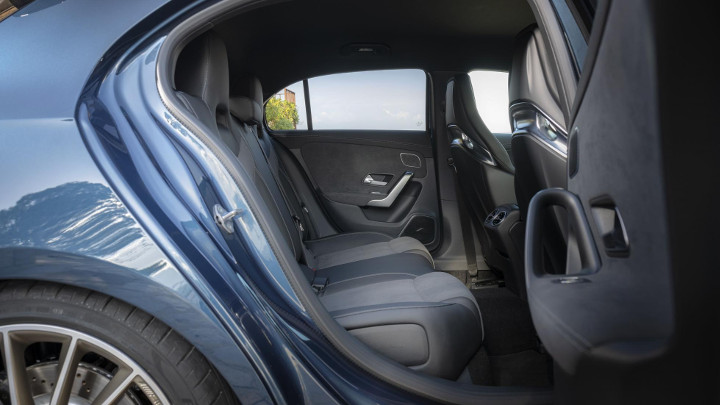 The seats are brilliant, their deep bolsters and fixed head restraints clamping you in for bends but caressing you the rest of the time. Step through the options packs and they’re first leather-dressed and heated, then electrified. Even the backseat is better-shaped than usual, and the big chairs in front don’t rob too much legroom.

A special AMG steering wheel has rotary knobs to cycle through the sport modes. The center console is scattered with buttons for particular subsets of the strategy: dampers, Sport or Comfort; transmission, manual or auto; ESP, on or off or partial. 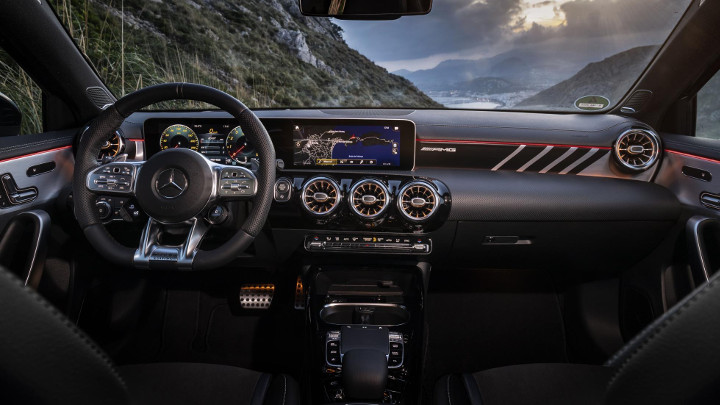 In a fully optioned A35, with the two big screens and the heads-up display, there are near-infinite graphical setups. Many of the performance-related readouts are specific to the AMG. You can light the dash up like Times Square, with dials and graphs and numbers and arrows and maps and pictograms—and that’s just the driver’s pod, not the central screen. You’ll probably spend ages experimenting with them, then revert to a slightly quieter simpler layout. When you do, it really is a dazzling piece of design and execution.

Now, while it’s fine to have the choice, the system is controlled by a pair of touchpads on the steering-wheel spokes. It’s far too easy to accidentally brush them with the pad of your hand and alter the whole setup. And we’ve never actually seen an A-Class with the base system, but we suspect it might be less distracting. The displays shrink from 10.25 to seven inches.

Then there’s the voice-activation system, which responds to your saying, “Hey, Mercedes.” In practice, it also cuts in when you or your passengers say all sorts of other entirely unrelated things that might possibly sound like Hey Mercedes to an ill-programmed AI audio algorithm. This is ridiculously inconvenient as it pipes up with ‘How can I help you?’ and obscures the navigation instructions at what might be a critical junction. 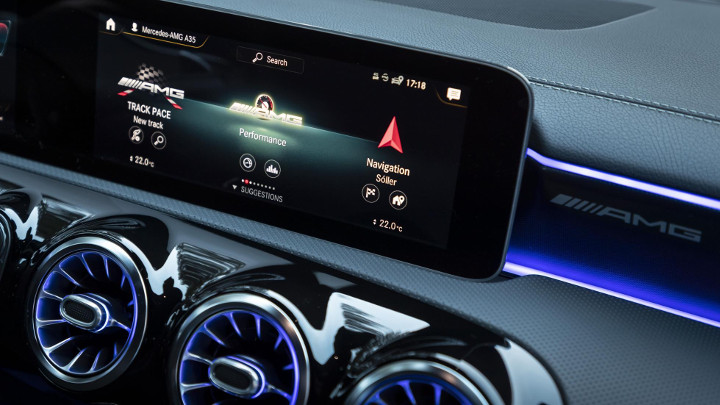 Bottom line is, there are too many conflicting ways to control this car, and you’ll end up deactivating some or most of them. As with the driver-assist systems, the learning curve is steep and can be slippery.

Get your kick from going quick? Then the Mercedes-AMG A35 is an awesome thing. The engine bolts it forward with a vehemence that’s rare in hot-hatchery, and the grip, steering accuracy, traction, transmission, and brakes entirely live up to the engine’s demands. 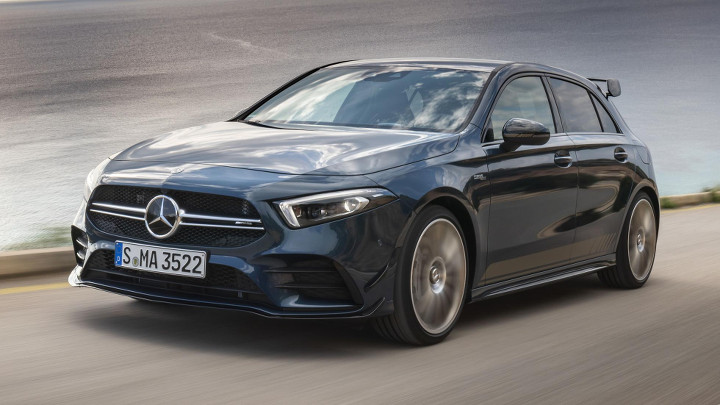 But beyond the sheer forces, stimulation is in surprisingly short supply. The steering is numb, the cornering unwilling to go along with any dance invitations from the throttle. If the optional aerodynamics pack leads you to think it’s a lairy little badass, we’re here to disabuse you.

But it has other talents. The cabin is exquisitely crafted and you can pile it up with the kind of connectivity, displays, and active driver aids a top-end limo owner would envy. So, it stands well above an A250, but there isn’t the drama of the old A45.

Does that make it a goldilocks car, or is it stuck between two stools? Depends on what you’re looking for. 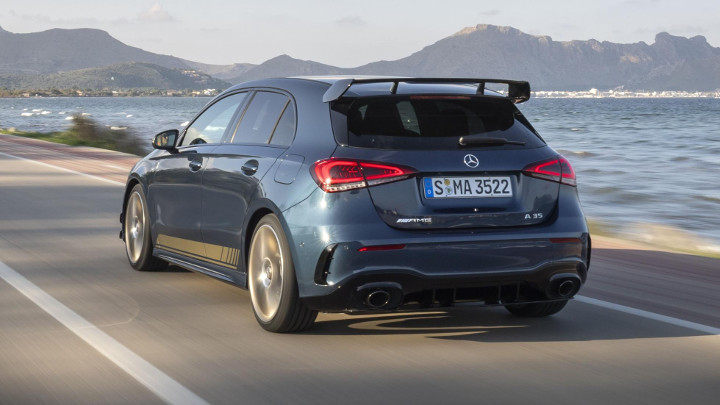 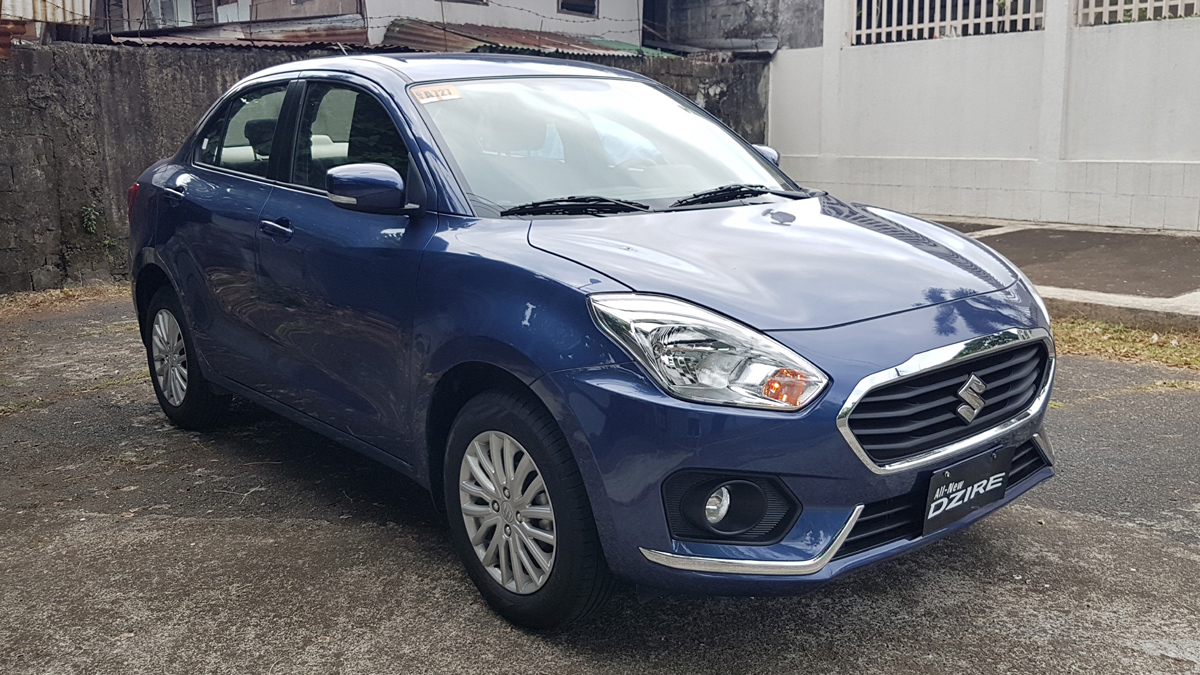 Review: Suzuki Dzire GL+
View other articles about:
Read the Story →
This article originally appeared on Topgear.com. Minor edits have been made by the TopGear.com.ph editors.
Share:
Retake this Poll
Quiz Results
Share:
Take this Quiz Again
TGP Rating:
/20