A very long silly name, but you probably won’t care when you tuck into the spec of the Aston Martin DBS Superleggera Volante. This is the ultimate open Aston, and may be forevermore, unless someone with a Valkyrie fires it under the world’s lowest bridge.

The droptop DBS inherits its V12 from the DBS coupe. It’s the only way to get an al fresco Aston V12 experience—the DB11 Volante is AMG V8 only. And what a V12 it is. A healthy 5.2 liters, two turbos, developing 715hp and 899Nm of torque with a power band to make a diesel weep. All of this prodigious power is the responsibility of the two rear tires, via a rear-mounted eight-speed automatic gearbox.

Now, because the DBS Volante is 100kg heavier than the hardtop, it’s a bit slower—a few tenths extra on every major sprint. But this is by no means a neutered, all mouth (and what a mouth), and no trousers machine. Officially it’ll do 0-100kph in 3.6secs, but it feels quicker, because just getting the DBS to haul itself off the line without breaking traction or troubling the traction control takes patience. 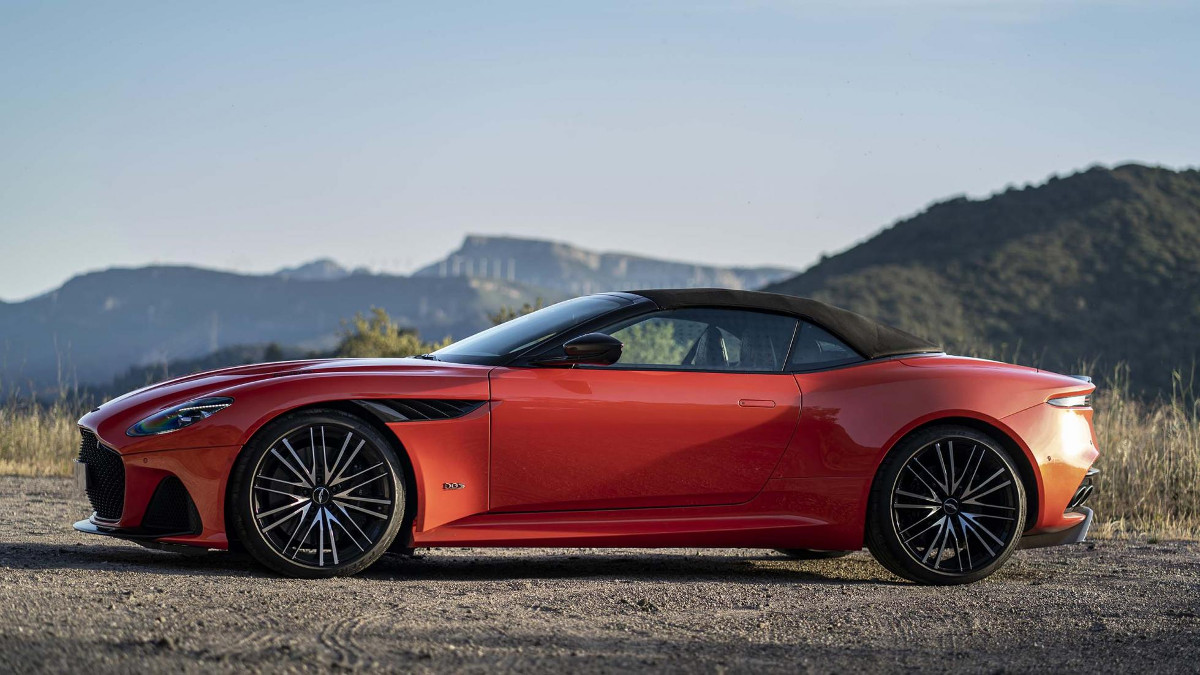 Once it’s rolling, this is a mighty, runaway, effortlessly fast car. Aston quotes the top speed at a McLaren-busting 340kph, because that’s the v-max with the roof down. Motor the soft-top over the 2+2 seat cabin and the DBS Volante won’t quit until it’s past 346kph. Bet that’s draughty. It’s a genuine supercar this, in smart-casual evening dress.

It’s a bit rich calling a car that weighs 1.9 tons with fluids on-board ‘Superlight,’ but the car is at least clothed in bespoke carbon panels—it’s a truly stunning machine in person, imposing and muscular yet graceful. Like an Olympic gymnast with a bodybuilder physique but capable of triple-pike backflips and silent landings.

The Volante has lost the coupe’s rear air intakes and its boot vent, which forces airflow out of the tail and glues the car’s backside to the road. But with some reprofiling of the front’s vents and intakes, Aston reckons there’s a negligible drop in downforce. We’re told there’s 177kg of downforce at the top speed, and since testing that in the UK is liable to land you in either a crown court or a séance, we’ll presume there’s ‘enough.’ There are other Aston Martins that bully the air more effectively, this one’s for slipping through it making you look as cool as humanly possible. 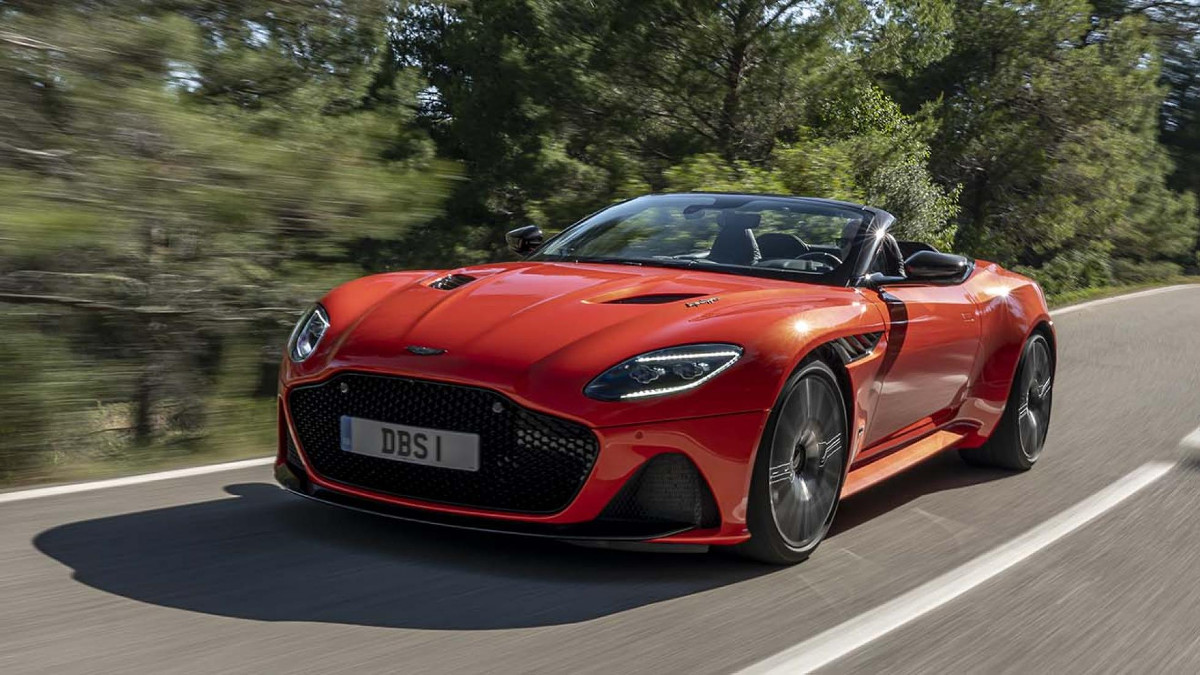 I daresay I’ve never driven a stiffer cabrio that doesn’t depend on a carbon tub—there’s no hint of flex or shimmy from the chassis, which runs the same suspension settings as the coupe. That’s confidence for you. No softening of the handling ‘because droptop buyers don’t go to track days’ excuses here. Aston handling chief Matt Becker says the DBS needed to stay sporty to justify its place and price above a DB11.

Ironically the DBS doesn’t bash you over the head with its flagship status. Immediately from the off, it’s not rattling you into concussion with a needlessly firm ride, V12 straining at the leash. It’s impeccably mannered. This thing steers, brakes, goes with such cultured pomp and circumstance, and looks so fabulous, it charms like no other £250k (P16 million) super-roadster can.

Best settings? Stick the engine in Sport Plus (loud exhaust crackles, big bark, sharp response), leave the suspension in its GT default (to feel the chassis glide along beneath you), and take the gearbox by the horns (okay, the tactile carbon paddles). The steering’s accurate, beautifully weighted, and refreshingly measured, unlike the joystick-quick turn-in Ferrari prefers. The DBS is happy to be more measured. It’s a gentlemanly brute, charming and debonair. 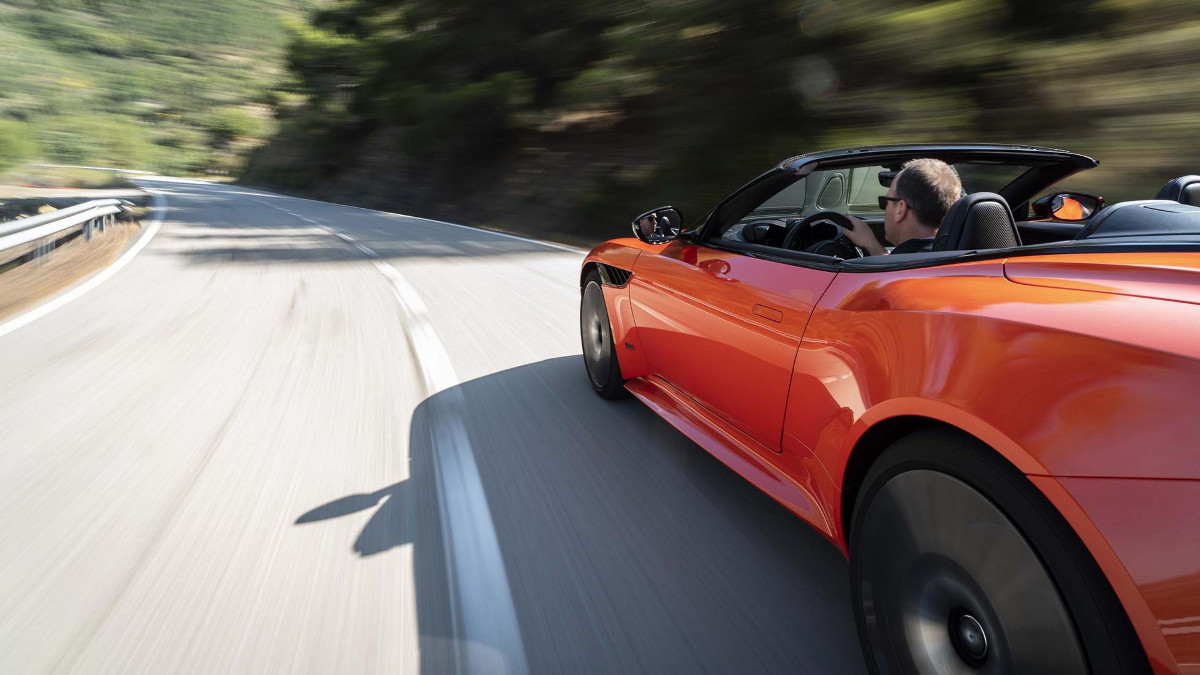 Mostly, the DBS puts its power down with traction alchemy, but more than once, it twerked its frankly gorgeous carbon hips when asked to change lanes and perform what should have been a routine overtake. In the dry. In fourth gear. It’s a demonically, relentlessly fast car. A couple of tenths behind on the hardtop from nought to sixty, sure, but still rapid enough to run with Ferrari 488s and Lamborghini Huracans. Super-fast.

There’s a deep, burbling bassy note to the V12, though as usual for a modern turbo motor, it sounds best at town speed (read into that what you will, poseurs) and slightly losing its timbre as the revs climb to the redline. But since you’re in a cabrio, the gale-force headwind you’re generating will tend to drown out the noise by the top of third gear.

If you’re used to the baleful yowl cried by the old nat-asp V12s from the Vanquish, the newer motor doesn’t freeze the hairs on the back of your neck with liquid nitrogen now that it’s turbocharged (and will get muffled later in the year when new EU filters have to be squeezed into the exhaust). But it’s got more menace to the soundtrack than the DB11 V12, and it’s a more expensive, cultured rumble than a V8. We’ll miss these engines when they’re gone, and in the Volante, you’re that much more intimate with the powerhouse under the gargantuan clamshell bonnet. 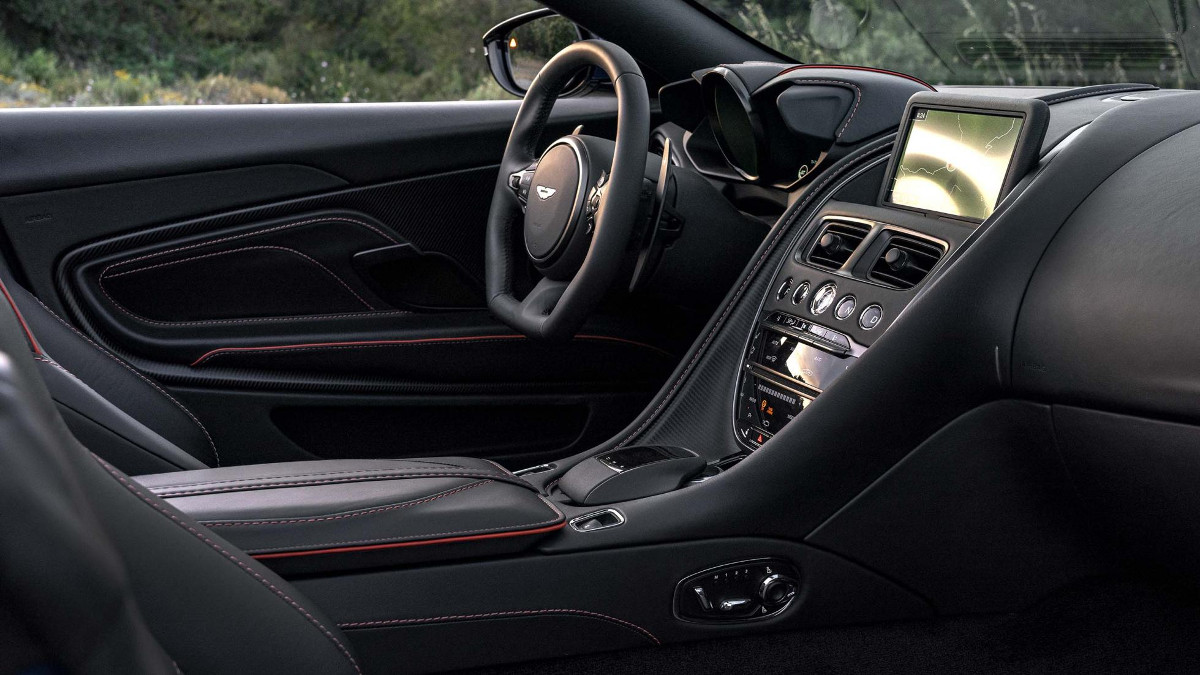 This car is really good at being a cabrio. Sorry, Volante. There’s no sense at all that the soft-top version is any kind of afterthought or poor relation to the coupe, which you do feel when you get in say, a Huracan Spyder or R8 Spyder, with their compromised driving positions and cramped cabins.

For a kick-off, the airflow has been managed expertly, and not just to cool the V12 and salvage some downforce. The air that escapes the hungry V12 is channeled politely overhead, so you can have a conversation as you barrel along the motorway, roof down, and whisper sweet nothings once the fabric top has motored into place.

It takes 16 seconds and works at up to 48kph. Or when you’re not even in the car—just plip the key to operate the top. It’s all been very well sussed out, and exquisitely assembled. Which you’d hope, for a quarter-million quid. This tangoed, carboned test car? Three hundred grand (P19.3 million). Do be careful with the carbon fiber on the options list, 007. 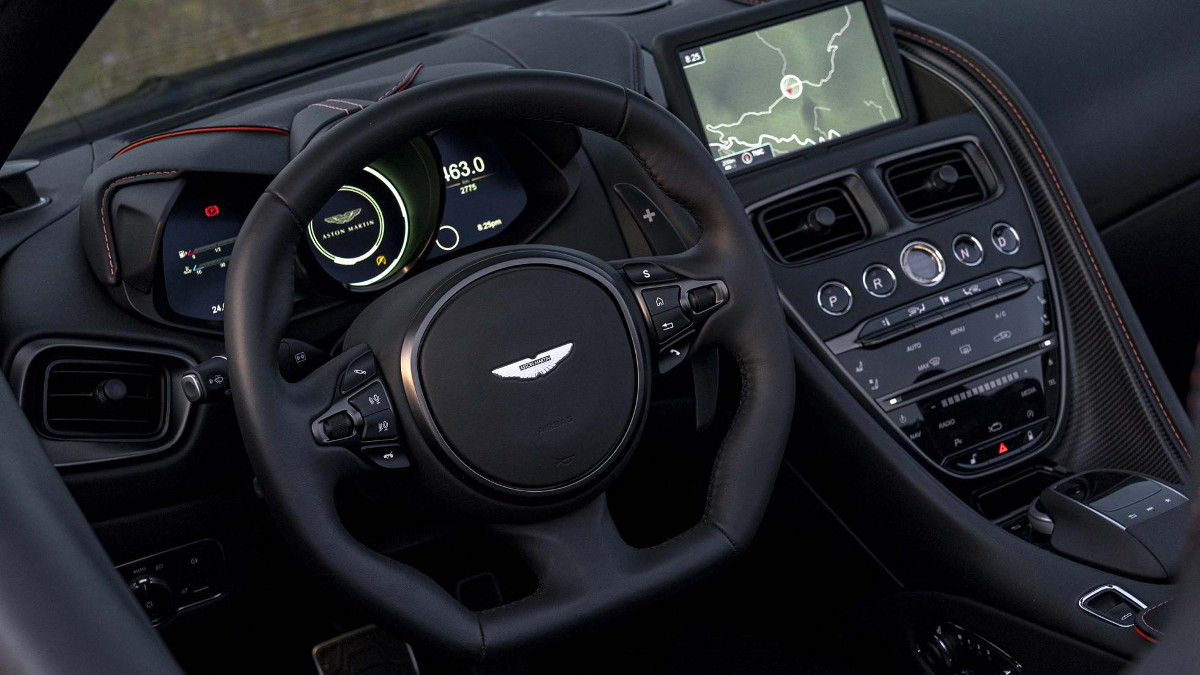 Foibles? Yep. The touch-sensitive dashboard is just as infuriatingly fiddly as in the (much cheaper) DB11, and visibility of all four corners is hopeless, not to mention the side view past the huge door mirrors. The Mercedes-sourced infotainment may look a tad dated compared to the latest pin-sharp graphics in, erm, a Mercedes A-Class, but there’s a clever irony to this.

See, when Mercedes bought into Aston Martin, it wasn’t just the AMG V8 for the Vantage that the Brits got out of the deal. Aston also inherited Mercedes’ infotainment, complete with clickwheel operation. Mercedes flogged off its wares and set about building a new interface for its current models, which uses a touchpad. And you know what? It’s worse. Trickier to operate, and less logically laid out. What the Astons lose in pixel resolution, they gain in usability. So if anyone tells you that the DBS Volante ‘just has an old Benz computer inside it’, remind them it’s actually easier to operate than the new Merc gear. Handy, when you’ve got 715hp to consider.

One more thing, Aston. Your leather odor is glorious. Build quality is superb. But why must the key for the DBS be the size and weight of a machine gun magazine, and why is there nowhere to store it in the car? Driving a cabrio everyone is going to be looking at with an unsightly bulge in one’s pocket is not a good look.

Give me some numbers 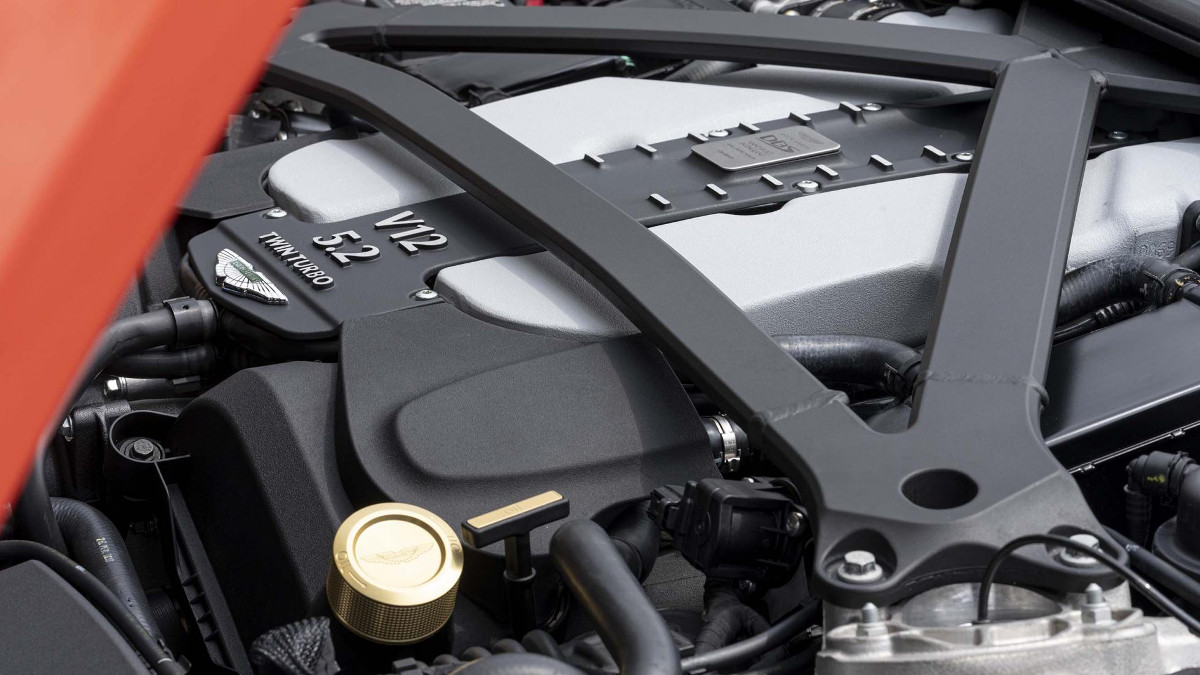 The DBS Superleggera Volante is a quarter-million pound car. Prices are set to start at £247,500, but it’s nigh-on impossible any will leave the factory without plenty of personalization heaped on top, and once you start adding the rather gorgeous carbon fiber garnish and bespoke ultra-glittered paint, the price can skyrocket with dangerous ease. The orange car in the gallery topped out at £301,000...

Claimed economy is 8.5km/L, which is thoroughly realistic if you’re cruising, but beware that this motor likes a swig if you floor it—reckon on high teens as a realistic average. But see, if you were worried about fuel bills, you’d probably have defaulted to the DB11 Volante and its, erm, parsimonious V8. It starts at just under £160,000, and it’s less than half a second slower from 0-100kph than the DBS. 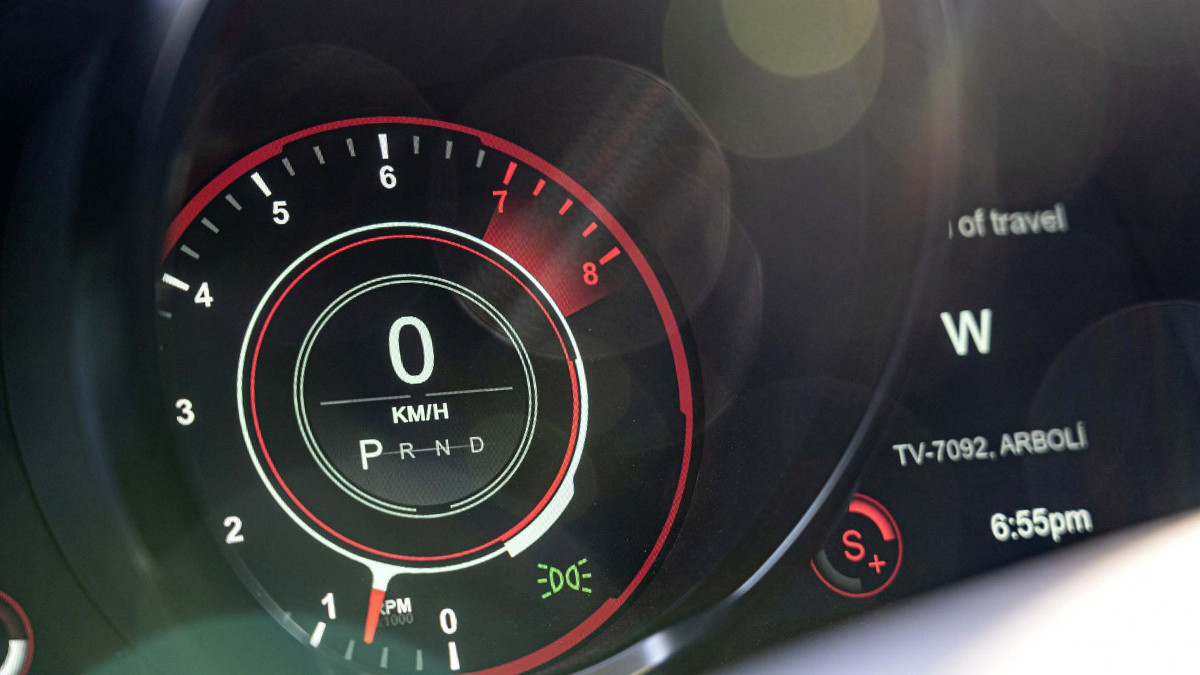 On a rational level, there’s no justification for the DBS Volante, then. The DB11 is almost as beautiful, almost as fast, sounds great, has the same interior and to every passerby, it’s just as much of an Aston Martin. Which means they’ll love it. Astons charm in a way no Ferrari or Bentley can. They walk the tightrope of not being gauche or ostentatious, perhaps because of the Bond connection, or because they’re so pretty.

But the DBS has so much swagger, and so much pace (not to mention its brooding, not-long-for-this-world V12 sound) that the world would be a poorer place without it. Worth £90k more than a DB11? On paper, no, but to drive one, to even see one lope past, is to love one. 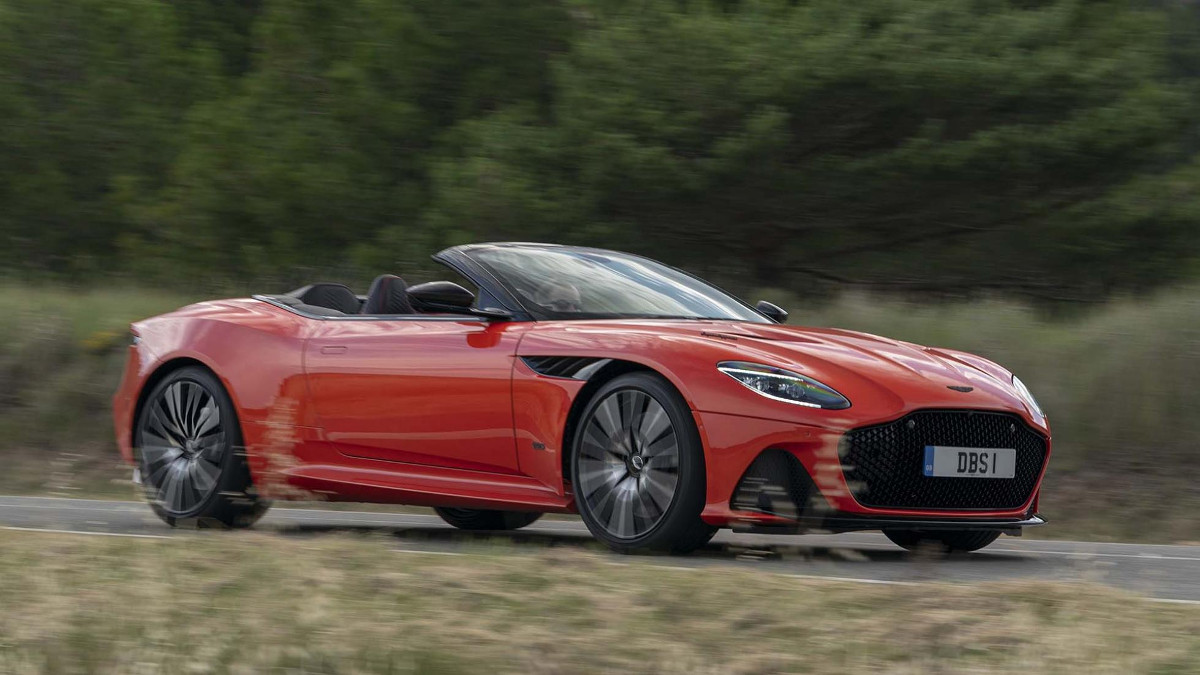 If you’ve skim-read this review, you might have the impression that the DBS Superleggera Volante is too heavy for its name, too powerful for its own good, and too expensive to be justifiable. But if you love cars, and appreciate the glorious madness of creating a 21st Century super-GT with more power than a Ferrari 488 Pista, then you can’t fail to be won over by the DBS Volante. Even though the dashboard graphics are pretty Fisher-Price and the touch-sensitive center console means turning on the A/C is worse than playing Operation. Blindfolded. 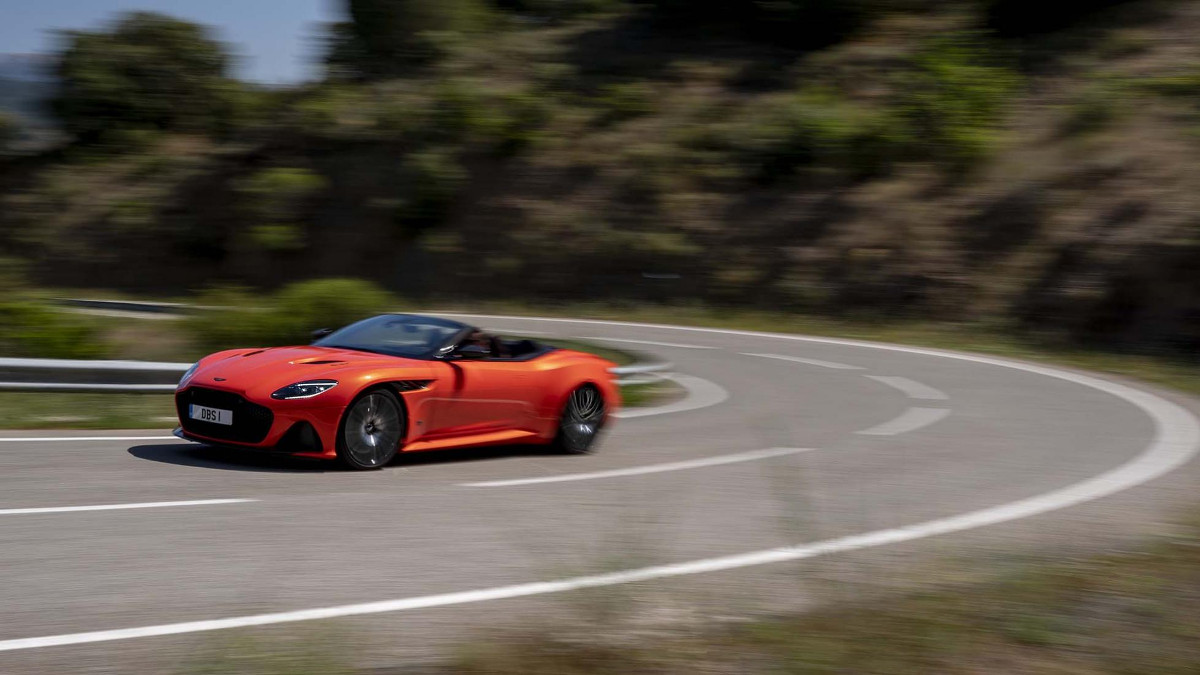 It’s Aston doing what it’s best at, very well indeed. It’s been engineered beautifully, to be ultra-stiff, comfortable and yet appreciably more sporting, more aggressive, than its stablemates.

No longer can you say that ‘all Astons look the same,’ and they certainly don’t have cookie-cutter characters. This one’s a swashbuckling superhero with an operatic bass’s voice, and is a worthy competitor to the Bentley Continental GTC, Mercedes-AMG S63 Cabriolet, and a whole harbor of luxury speedboats. 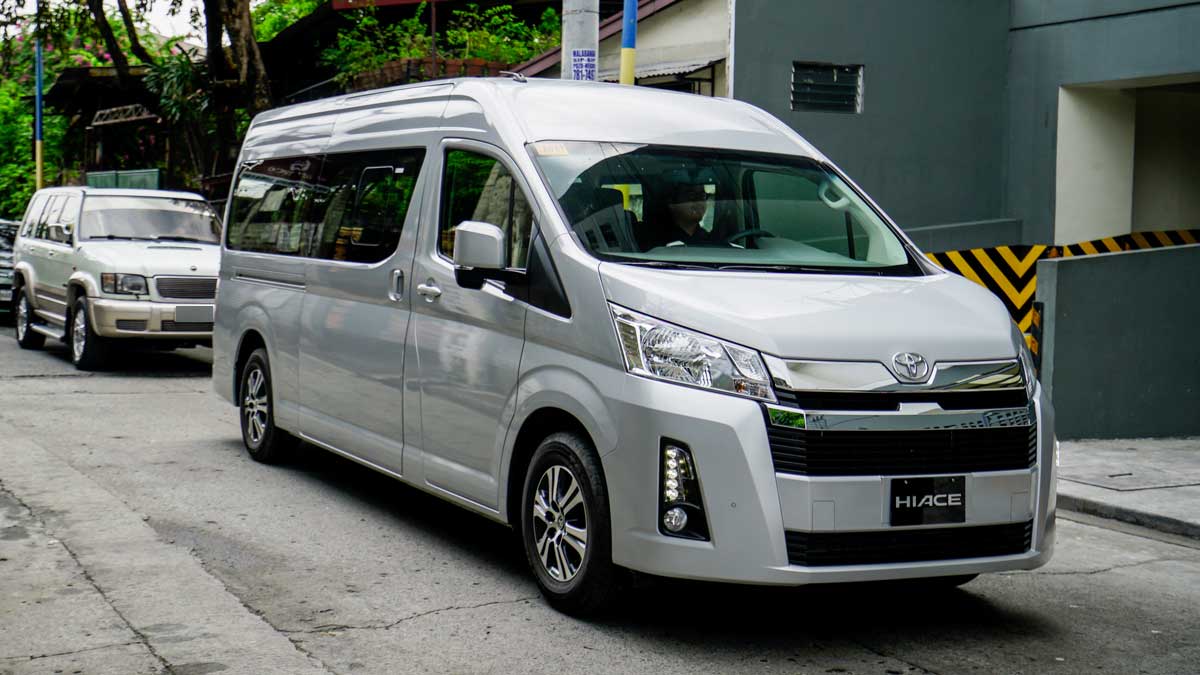 Review: Toyota Hiace GL Grandia Tourer AT
View other articles about:
Read the Story →
This article originally appeared on Topgear.com. Minor edits have been made by the TopGear.com.ph editors.
Share:
Retake this Poll
Quiz Results
Share:
Take this Quiz Again
TGP Rating:
/20