He missed driving this car in Monaco, but Vernon B. Sarne discovers that driving the Jaguar XF in Manila isn't necessarily a lesser experience
Feb 23, 2009
CAR BRANDS IN THIS ARTICLE

One of the perks of being an automotive writer is the opportunity to visit various places around the world. I've attended car shows in Tokyo and New York. I've witnessed product unveilings in Bangkok and Sardinia. I've watched motor racing in Sepang and Singapore. I've gone to automotive museums in Munich and Dearborn. I've driven fast in Andalusia and Dubai. I've done off-road driving in Alice Springs and Kota Kinabalu. I've visited assembly plants in South Carolina and Ulsan. I've participated in conferences in Bali and Mumbai. Yes, I've had drinks with industry executives in Luxembourg and Gothenburg.

There is almost nothing a carmaker can stamp on an event invitation that is guaranteed to still take my breath away. And yet, if there's one place I'm dying to go to, it's the Principality of Monaco. This small city-state in Western Europe, to me, represents the ultimate in luxury and exclusivity. It's also a haven fit for any hardcore gearhead. Not only is it the site of the Monaco Grand Prix and the Monte Carlo Rally, it is also home to a plethora of supercars and one-off limousines. And let's not forget the ritzy casinos and the flamboyant yachts, both of which feature stunning ladies who might give you the time of day if you were driving a flashy car like the, well, Jaguar XF.

But what are the chances of us third-world mortals driving a sports sedan through the posh streets of Monaco? My personal answer: virtually zero. I always figured it would be too prohibitive to do so. Not even Toyota - with its No. 1 global status and bottomless resources - would toy with the idea of hosting a Philippine press contingent there for a Formula One race.

That was before last summer, when I got a call from Jaguar and was asked if I wanted to drive the new XF in--oh, boy--Monaco. The invitation was so exclusive that I would be the only Pinoy journalist to go. You're thinking I jumped at the chance, right? I would have - if I didn't edit a magazine. Gone are the days when I could leave the country at any moment's notice just because I didn't have to worry about putting an entire publication to bed. The Monaco invite came at a time when we were cramming to beat the deadliest of deadlines, so I sent someone else to cover the story.

I'm sure you came across that article if you're a regular reader of this magazine. Do I regret not being able to go? You bet I do. Fortunately, the next best thing came my way to somehow assuage the frustration. Shortly after the official launch of the XF in our market, I got offered first dibs on the test unit. This time, there was no passing it on to a colleague.

The XF--in case you didn't know--replaces the S-Type in Jaguar's product line. It is a significant model because it was technically the last one fully developed under the ownership of the Ford Motor Company (Jaguar was recently purchased by India's Tata Motors). In fact, the chassis that underpins the XF is the same one found beneath the short-lived reincarnation of the Thunderbird. So if you're a Jaguar customer who feels a little iffy about Tata's takeover of your favorite automotive brand, the XF is the last car to be completely untouched by the Indian carmaker.

Although, of course, this change in ownership can be viewed from an opposite standpoint. Not a few Jaguar purists charged that Ford diluted the British marque's prestige and tampered with its heritage, resulting in less-than-brilliant cars like the Mondeo-based X-Type. So there are also sure to be Jaguar fans out there who applaud their brand's release from an American company. Besides, Tata has some British blood running through its veins, as India was once a colony of Great Britain, and the Tata Group owns a London-based steel producer called Corus (previously British Steel Corporation).

If I could use just one word to describe the XF, I'd say it is a showstopper. You buy this car not so much for the performance and the luxury as it is for its natural ability to drop jaws. It's like it was conceptualized to entertain. The coupe-like exterior is visually arresting. I brought it to a funeral and several mourners couldn't help but flash a grin as they let their gaze shift from their relative's coffin to the XF's sleek and modern body.

I turned into a master showman every time I wowed my passengers with the car's sci-fi cockpit. My repertoire always went like this: I'd push the start button on the center console and the circular transmission knob would gradually rise from its hiding place; I'd turn the air-conditioning on and the air vents would magically flip open; and I'd fiddle with the touch-screen info monitor and the audio settings would fall into place. After this pre-drive ritual, my passengers always knew for sure they were inside an extraordinary car.

The 3.0-liter V6 engine under the hood of our base unit, however, is anything but extraordinary. This Duratec powerplant has previously seen action in both the X-Type and the S-Type. The 240hp, 293Nm engine is adequate for city driving, but can be underwhelming on the open road. If you have a problem with this, the XF is also available with V8 and supercharged V8 engines - for an extra cost that would buy you a Japanese compact car (in the case of the V8) or a German executive sedan (in the case of the supercharged V8). The 3.0 V6 is sold for P4.7 million.

The most unique feature of the XF for me is the rotary knob for the transmission. What functions as the iDrive in BMW sedans is actually the gear-shifter in the XF. Just rotate it to the right and you're ready to go. Now, if you find this a bit on the effeminate side, there's always the pair of paddle shifters behind the steering wheel.

I had driven various Jaguars before, but the XF is the one car that truly made driving such an exclusive privilege. Turns out it doesn't really matter whether you drive it in Monaco or in Paco--inside this car, the height of motoring ecstasy is a constant. 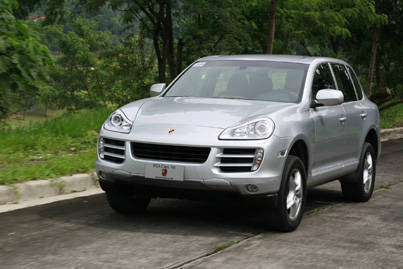 More horsepower but...
View other articles about:
Read the Story →
This article originally appeared on Topgear.com. Minor edits have been made by the TopGear.com.ph editors.
Share:
Retake this Poll
Quiz Results
Share:
Take this Quiz Again
TGP Rating:
/20