Driving a Porsche SUV isn't a problem for Vernon B. Sarne, but he feels the engine still lacks the oomph befitting the badge
by Vernon B. Sarne | Feb 17, 2009

I am not a Porsche owner. And in all likelihood - unless I sell out and become a politician - I never will be. Hence, I don't have a problem with a Porsche sport-utility vehicle. I say this because, apparently, many Porsche sports-car owners were livid over the German carmaker's decision at the turn of the millennium to produce a burly SUV - a four-door vehicle at that. While it is safe to say that this overall resentment has mellowed since the Cayenne's global introduction in 2001, there still remain a significant number of Porsche purists who'd kill the model if they had their way.

And though I'm not a Porsche owner, I can understand where the displeasure was coming from. The Cayenne, as you very well know, was separated at birth from the Volkswagen Touareg - the two SUVs having been developed together and sharing a common floor pan and drivetrain parts. Some may argue that, at the very least, Volkswagen is also a German brand. But that's like saying Patek Philippe owners won't mind having their timepiece equipped with Swatch moving parts just because both brands are Swiss.

It thus makes sense that when Porsche overhauled the Cayenne into a 2008 model, which internationally went on sale in March 2007, the Zuffenhausen-based automaker wanted to completely shed its SUV's Volkswagen ties. The company did this by declaring the new model to be a "second-generation" one. In truth, what we have now is a vehicle that underwent a comprehensive makeover and not an all-new incarnation. The chassis, sheet metal and essential gear components have, in fact, been carried over.

That is not to say, however, that the 2008 Cayenne doesn't deserve the ‘new' tag. It rightfully does, especially since the basic upgrade is found under the hood. The unit lent to us was the ‘entry-level' model powered by the base V6 gasoline engine. This engine was borrowed from - yes, you guessed it - the Volkswagen Touareg. In its previous version as a weak 3.2-liter, 247hp powerplant, this V6 used to be the laughingstock of the motoring press. By increasing the displacement to 3.6 liters, adding direct fuel injection, and tweaking the variable valve timing, Porsche was able to extract 43 more horses for a beefier 290hp. Torque likewise leaped from 310 Newton-meters to a muscular 385Nm - an amazing 24-percent increase.

I applaud the V6 engine's bigger displacement and greater power. But when this engine is made to haul a hulking 2,170-kilogram sport-ute, it still seems a bit inadequate and unworthy of the ultra-prestigious Porsche badge. Indeed, the Cayenne V6 feels ordinary on the highway. Nothing to shout from the rooftops for. The engine's relative lassitude all the more magnifies the heft of the Cayenne, giving you the impression you're steering an aircraft carrier and making you hanker for either the Cayenne S's 4.8-liter V8 (385hp) or the Cayenne Turbo's 4.8-liter turbo V8 (500hp).

Sure, the P5.6-million Cayenne V6 can hit a maximum 230kph, but getting up to that speed can take an eternity. In fact, just going from zero to 100kph in our Tiptronic S unit takes a lethargic 8.5 seconds, 1.7 seconds slower than the S and 3.4 seconds behind the Turbo. Given these facts, you'd be stupid not to pony up an additional P1.3 million for the S variant, which, in my opinion, is the best model in the Cayenne lineup in terms of value for money.

Volkswagen-derived V6 aside, the base-model Cayenne is a rolling showcase of Porsche engineering and craftsmanship. Shut the hood close and everything in this SUV is superb. The changes to the exterior design are more subtle than overt, but they've made the lines cleaner. The overall effect visually is styling cohesiveness, making the Cayenne look like a true SUV counterpart of the 911.

The levels of fit and finish are incomparable. Nothing is awkward to the senses. The leather and plastic feel and smell regal, and the metal parts are the most solid and most perfectly sculpted I've seen and touched in a long while. I was sitting in the cockpit and all I could think of was how first-rate the appointments inside were. I actually feared not being able to go back to my own car without griping about the absence of luxury. This Porsche isn't short in taking care of its occupants' well-being-a sensation that's aided in no small part by six airbags (two in front, two at the thorax side and another two on the roof frame).

Let's not forget Porsche built the Cayenne for off-road use. Just because the company made a name for itself making sports cars, doesn't mean it can't design a vehicle that has the ability to tackle the dirt. The Cayenne is all-wheel-drive, with a wading depth of 500mm, an approach angle of 28.6 degrees and a departure angle of 22.8 degrees.

There's the option of air suspension, which makes things a lot more interesting. Our test unit had it. With air suspension, the Cayenne has a wading depth of 555mm (España floods will be a breeze), an approach angle of as much as 31.8 degrees and a departure angle of as much as 25.4 degrees (Pinatubo will feel like a racetrack). The steel-sprung Cayenne has a ground clearance of 218mm. Air suspension increases this to as high as 271mm and decreases it to as low as 161mm. Note that the vehicle price we quote here may or may not include the air suspension package. PGA Cars, the official distributor of Porsche cars in the Philippines, refuses to provide exact model prices for reasons that befuddle us.

All new Cayenne models are now equipped with the so-called Porsche Stability Management. This system supposedly uses an assortment of sensors to monitor the vehicle's direction, speed, yaw and lateral acceleration. In simpler terms, PSM will know when the Cayenne is skidding or oversteering, for instance, and make the necessary correction so that you won't roll over in your multimillion-peso investment.

The Cayenne V6 is satisfactory - just not very Porsche-like in the area of performance. Go for the S model and you won't have to live with a mediocre powerplant and a modest set of 17-inch alloy wheels. 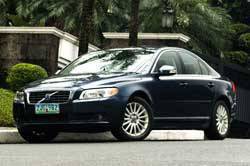 Swedish ambassador
View other articles about:
Recommended Videos
Read the Story →
This article originally appeared on Topgear.com. Minor edits have been made by the TopGear.com.ph editors.
Share:
Retake this Poll
Quiz Results
Share:
Take this Quiz Again
TGP Rating:
/20