A strong case of style and features
by Andy Leuterio | Dec 28, 2012
CAR MODELS IN THIS ARTICLE 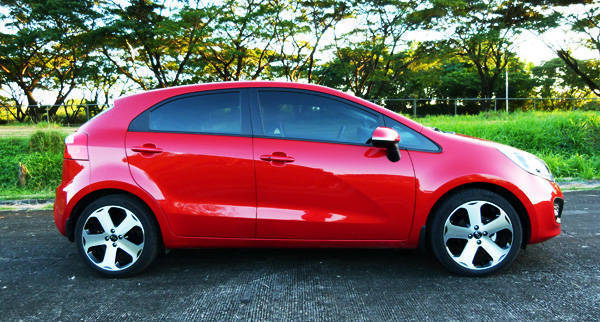 The Kia Rio 1.4 5-door may well be one of the most stylish hatchbacks yet to grace Philippine roads. With lines reminiscent of the VW Golf, it gives the Ford Fiesta a run for its money in the looks department and leaves the Honda Jazz and the Toyota Yaris looking positively frumpy. But is the whole car good enough to be taken seriously in the highly competitive B-segment market? Let's see. 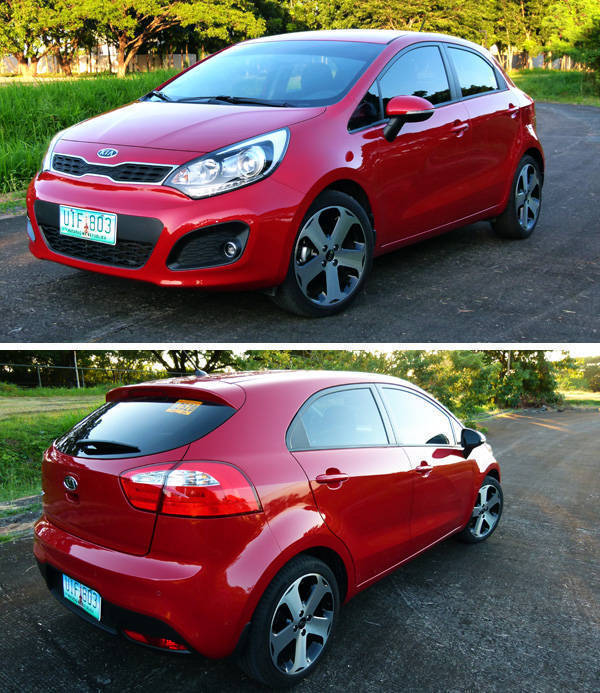 Especially when swathed in our test unit's "Signal" (aka red) paint job, the Rio's striking good looks do a good job of hiding the fact that it's essentially an economy car. Rich details abound like the almond-like shape of the headlamps, the five-spoke wheels that nicely fill out the wheel wells, and the sexy rump that borrows styling cues from its stablemate, the Sportage. Check out the graceful sweep of the roofline and how the front quarter-panel windows are framed by the blackout pillar of the window frame. 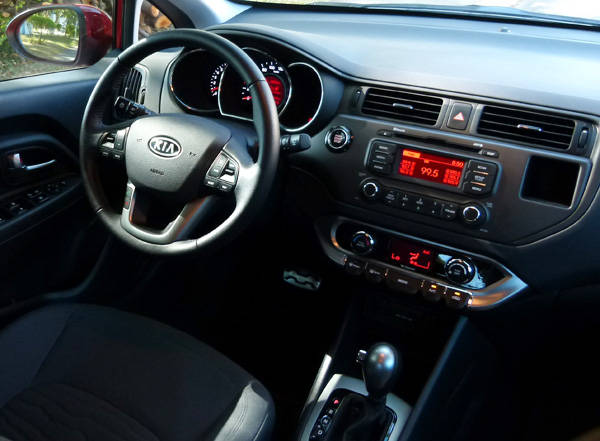 The Euro theme continues inside with a dark cabin illuminated by red lighting. The dashboard is primarily a black-and-gray affair with plastics that are agreeably pliant in the right places and lacking that cheap "Armor All" sheen so common in this class. The cockpit is a nice place to sit in with the instrument gauges artfully enclosed in chrome-ringed pods and framed by a leather-wrapped steering wheel. The latter's rim is agreeably thick and has indentations at the 10 and 2 o'clock positions for your hands, while the spokes have buttons for the stereo,  cruise control, and Bluetooth phone system. Even the shifter is shaped to conform to the way your hand would naturally grasp it, and it's also wrapped in leather.

The seats themselves are shaped for the majority of the driving population, with decent thigh and lumbar support, but lacking sizable bolsters to keep one in place when the going gets twisty. They're upholstered with sporty, breathable fabric that looks very classy and breathes well in our tropical climate. 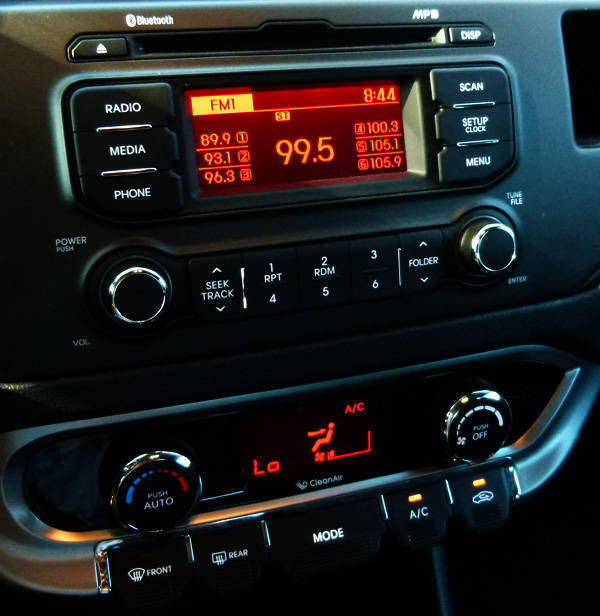 The center stack has a logical design with the stereo controls up high and the climate control down low. I like the unique, retro touch of the A/C buttons; you press them down like piano keys. The 12V power outlets, USB port, and auxiliary jack are beneath the climate control.

Overall build quality is impressive, too. It's easily on a par with anything from Japan, and that includes the tactile feel of the switches and the dials. And yes, it easily passes the solid "door slam" test. 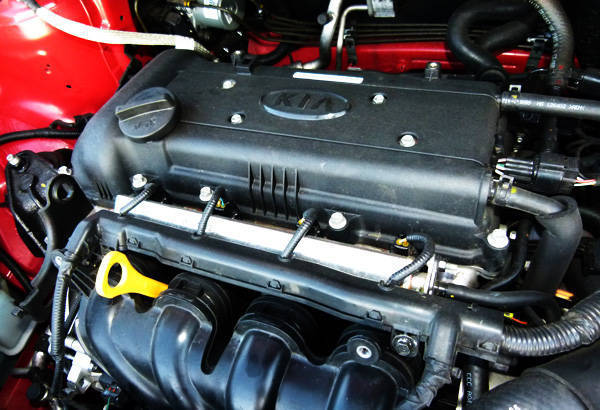 Any expectations that the Rio might be a Korean "hot hatch" are quickly extinguished the moment you floor the throttle. This is because the Rio gets by with a 1.4-liter unit that's more about thriftiness than getting your juices flowing. While it's not particularly anemic as it can merge on the highway just fine, it quickly loses steam past 100kph and starts sounding ragged above 4,000rpm. The transmission does have a manual shift gate if you want to take matters in your own hand, but you only get four gears to work with. Bummer. My city-driving errands averaged 8-9km/L, while highway efficiency went up to 12km/L. I could have gotten a better figure if I really tried, but my problem with small engines is that I usually end up working them harder than if I had a few more horses to work with.

City dwellers probably won't have any issues with the power, but those who plan to use the car for long road trips may find the 1.4 a mite too small for their needs.

There are no surprises with the Rio's handling. With struts up front and a torsion beam at the rear, the car is predisposed to understeer. So long as you know what you're doing, you can gently drift the tail out by entering a corner and briefly dabbing the brakes mid-turn, one of the fun traits of a torsion beam setup. Still, the car isn't meant for overly furious driving. It's soft and damped reasonably well to smother out all but the biggest bumps without bobbing, and it's remarkably smooth riding considering the short wheelbase and the short sidewalls of those 45-series, 17-inch Continentals. 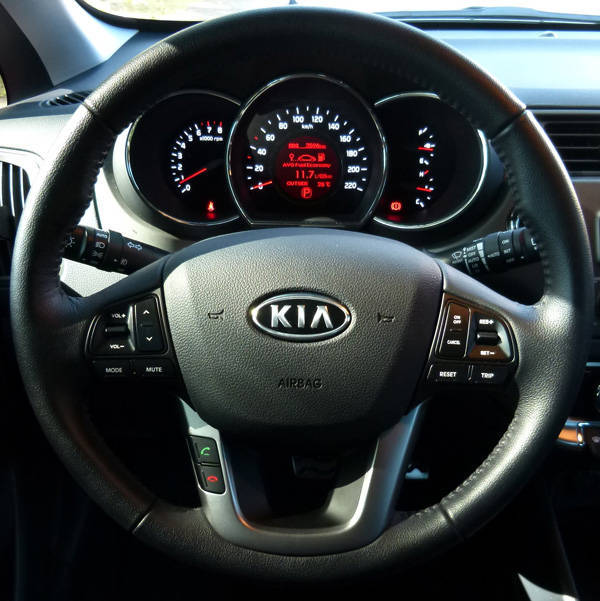 Major comfort and convenience features include a six-speaker stereo with steering wheel-mounted controls and Bluetooth connectivity, cruise control, auto climate control, Smart Key, start/stop ignition, rain-sensing wipers, rear parking sensors and 60:40-split folding rear seatback. There's even a full-size alloy spare, which should assuage any concerns about having to make do with a "donut" in the event of a flat.

The Rio doesn't come cheap at an SRP of P838,000, but the overall look and feel of the car suggests that Kia is going for a cosmopolitan appeal this time. While the drivetrain fails to make any serious headway against its competitors--most of which make around the same amount of power anyway, give or take a few HP--Kia makes a strong case for the Rio when you consider its distinctive sense of style and features.