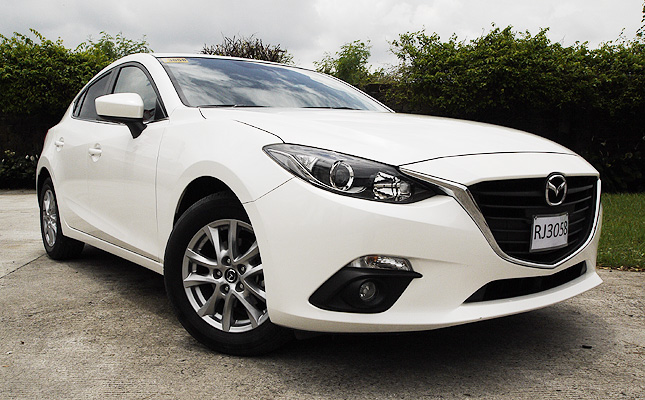 The Mazda 3 was Top Gear Philippines' 2014 Car of the Year because of the myriad of Skyactiv technologies the Japanese carmaker introduced into the car, so much so that saying that Mazda practically reinvented the car wouldn't be too far off.

While certain Skyactiv features--like the i-Stop and i-eLoop systems--didn't make it to the 1.5-liter V variants, the car nonetheless received significant changes done to the chassis, the suspension and the engine.

To find out just how good the Mazda 3 is even without some of its high-tech Skyactiv electronic wizardry, we drive the 1.5-liter V variant in its arguably better-looking form: the five-door hatchback. 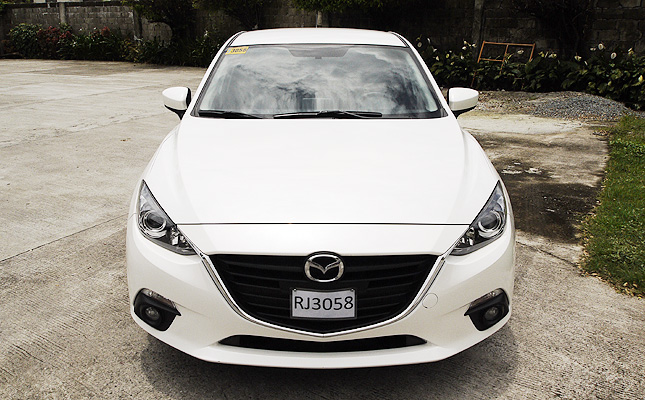 There’s no question about it: Mazda’s Kodo design language just works. We initially thought those sinewy lines would only work on a midsize car like the 6, but they also suit the compact dimensions of the 3. Heck, they even work on the even smaller 2 and CX-3, but that's another story.

From the snout to just before the A-pillar, the 3 mimics the look of the 6, the only difference being that the character line of the midsize sedan cuts lower and deeper into the front doors. The master stroke in the 3's styling can be found from the C-pillar backward, as the sloping rear hatch gives the car a sporty vibe that was lacking in the previous-generation model and its nearly upright hatch. If only it also had the same dual-muffler exhaust system of the 2.0-liter R variant. 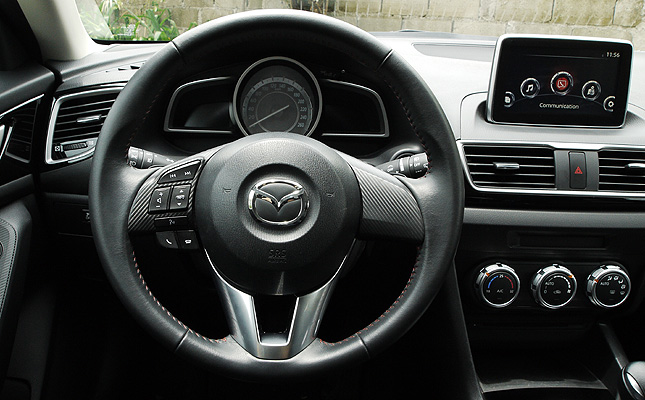 Mazda's engineers certainly paid attention to the 3's cabin, keeping it simple yet effective, an exercise in both restraint and functionality.

Step inside the minimalist interior and you'll be greeted only by the instrument binnacle, a seven-inch LCD touchscreen mounted high on the center console, three-dial electronic controls for the air-conditioning system, and the multifunction command control knob. There’s also a CD player that's discreetly displayed near the bottom of the center stack, while two USB ports and an SD card slot take shelter in the center console box.

Carbon fiber-like and piano-black accents on both the dashboard and the door panels enhance the premium feel of the 3's interior, as does the leather-wrapped steering wheel. And although the seats are only clad in fabric, at least your bottom won't get cooked when you sit on it after parking the car under the sun. Helping add to the sporty character of the car are the center-mounted analog speedometer flanked by the digital tachometer and the fuel gauge, and the floor-mounted, organ pedal-style throttle pedal. 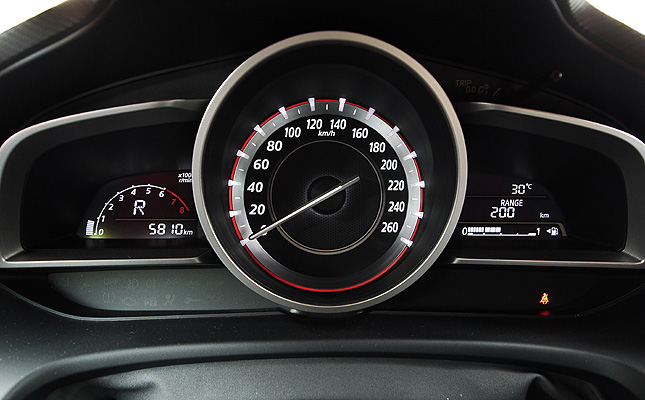 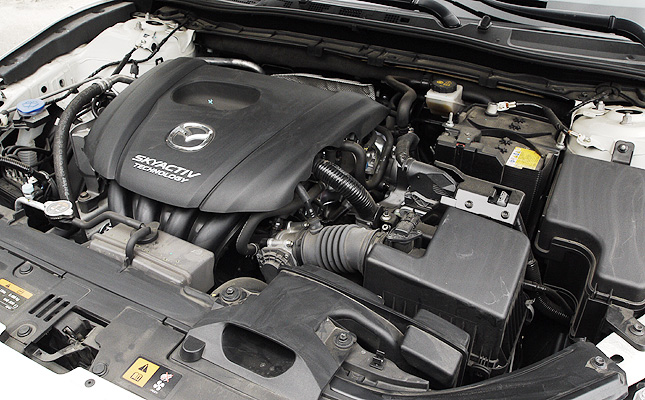 As for the six-speed Skyactiv-Drive automatic transmission, when Mazda said it combined the best aspects of a conventional automatic, a CVT and a dual-clutch gearbox, the company wasn’t kidding. Left in full-auto mode, shift shock is practically non-existent, while power delivery is very smooth and linear. In semi-auto mode, cog-swapping gives a manual-like impression as power is translated to the front wheels in a more abrupt fashion.

Having the 3 for a week around the city gave us a fuel economy of 11km/L, a minimal improvement over the figure of the i-gizmos of the 2.0-liter R. We figure that if the former received the same techno-wizardry as the latter, we could be looking at 12-15km/L, placing it within diesel territory. We wish Mazda could make the i-Start and  i-eLoop systems available on the aftermarket. 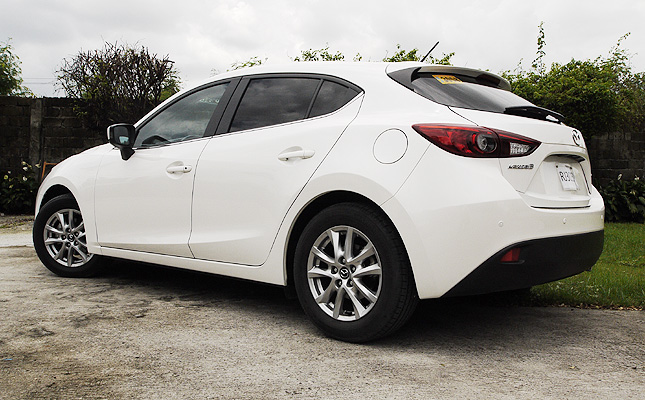 Utilizing the same front MacPherson and rear multilink beam suspension setup, the 1.5-liter 3 is just as fun to drive as the 2.0-liter variant, taking corners with aplomb. Its taller tires also mean it offers a more comfortable ride than the latter.

The electric power steering system, another one of Mazda's fuel-saving measures, surprisingly felt a lot like a hydraulic-assisted system, providing the proper feedback both in a straight line and around corners. 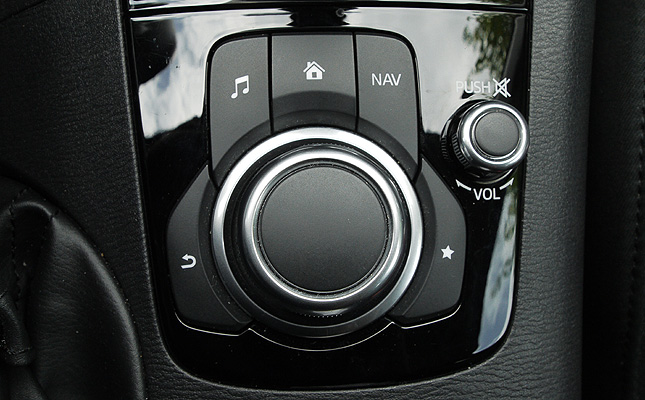 The multifunction command control knob controls practically everything in the car--from when and how you want the doors to lock and unlock, to syncing your smartphone via Bluetooth. This is all done through the aforementioned seven-inch touchscreen display mounted high on the dashboard. Thankfully, being able to operate everything through the knob means the LCD screen can be left practically smudge-free. Worth mentioning is that the buttons around the knob, which help the driver navigate through the multitude of menus on-screen, all rest under all five fingertips. The command control knob is so convenient, you'd wish each and every car had it.

The 1.5-liter Skyactiv V is arguably the best car in its class. Costing P250,000 less than the 2.0-liter Skyacitv R, it only misses out on the bigger engine (and its accompanying power advantage), the i-Stop and i-eLoop systems, the sunroof, and the leather interior. Everything else that's good about the top-of-the-line 3--like the high 13:1 engine compression ratio, the 4-2-1 exhaust layout, and the smooth-shifting transmission--is also found in this variant, making it a very promising choice.

The only reason you’d be willing to put down nearly P1.2 million for the 2.0-liter Skyactiv R hatchback is that you're either the type who likes to get the full-option model or you believe in Mazda's Skyactiv suite of technologies--or both. But if your budget is limited to just below P1 million, you'd be hard-pressed to find a more complete and more compelling package on the market today than what the 1.5-liter 3 Skactiv V has to offer.

Review: Tata Manza Aura 1.3 MT
View other articles about:
Read the Story →
This article originally appeared on Topgear.com. Minor edits have been made by the TopGear.com.ph editors.
Share:
Retake this Poll
Quiz Results
Share:
Take this Quiz Again
TGP Rating:
/20