Aston says they're ‘authentic reproductions of the DB5 seen on screen’
by Tom Harrison | May 19, 2019

In 1997, an Aston Martin DB5 that originally appeared in Bond film Goldfinger was stolen.

Nobody knows how it was taken—though plenty have speculated it was dragged by its axles from the Florida airport hanger in which it was being stored and loaded onto a waiting cargo plane—and it hasn’t been seen since. Very 007. Investigations by authorities, insurance companies, and so on have turned up little. Current thinking is it’s somewhere in the Middle East, but some maintain it’s lost forever at the bottom of the sea. 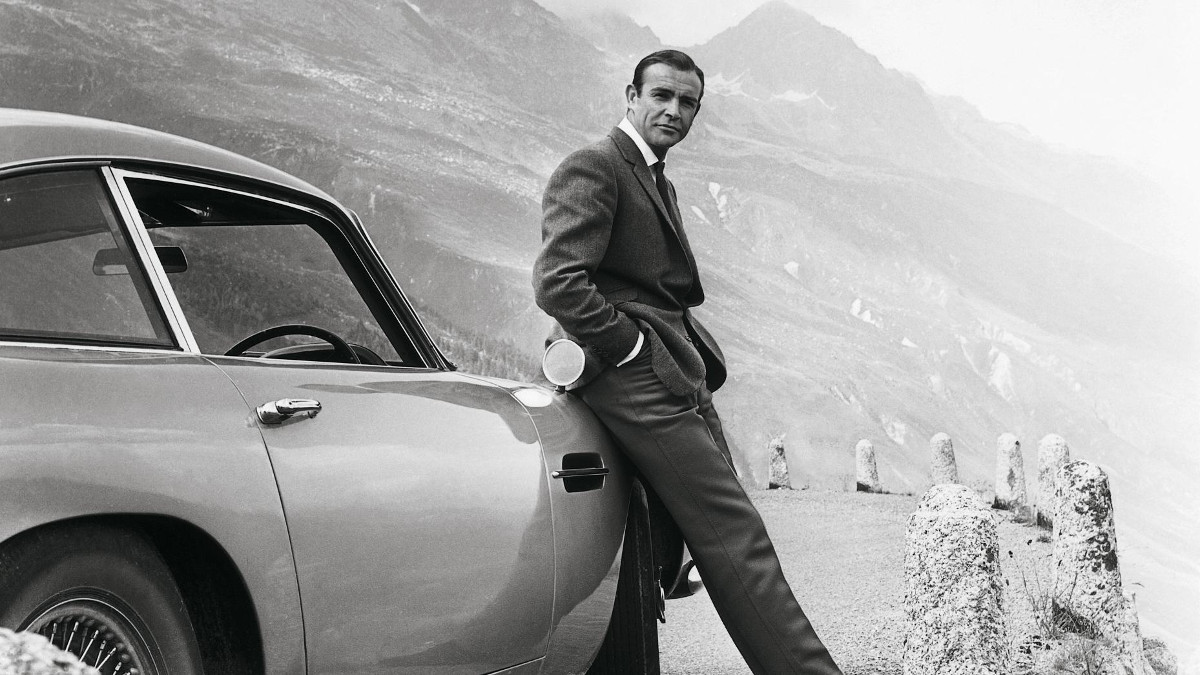 There are other ‘Bond’ DB5s, of course. The stolen DB5 was what they called the ‘effects’ or ‘trick’ car. Based on a prototype DB4 though all but identical to a production-spec DB5, it was the one equipped with all the gadgets—the revolving number plates, machine guns, and so on.

After filming, BMT 216A was stripped of its goodies by Aston and sold. But at some point, the gadgets were reinstated (but not by Aston), and the car flipped until it ended up in the hands of Anthony Pugliese, from whom it was stolen in 1997. 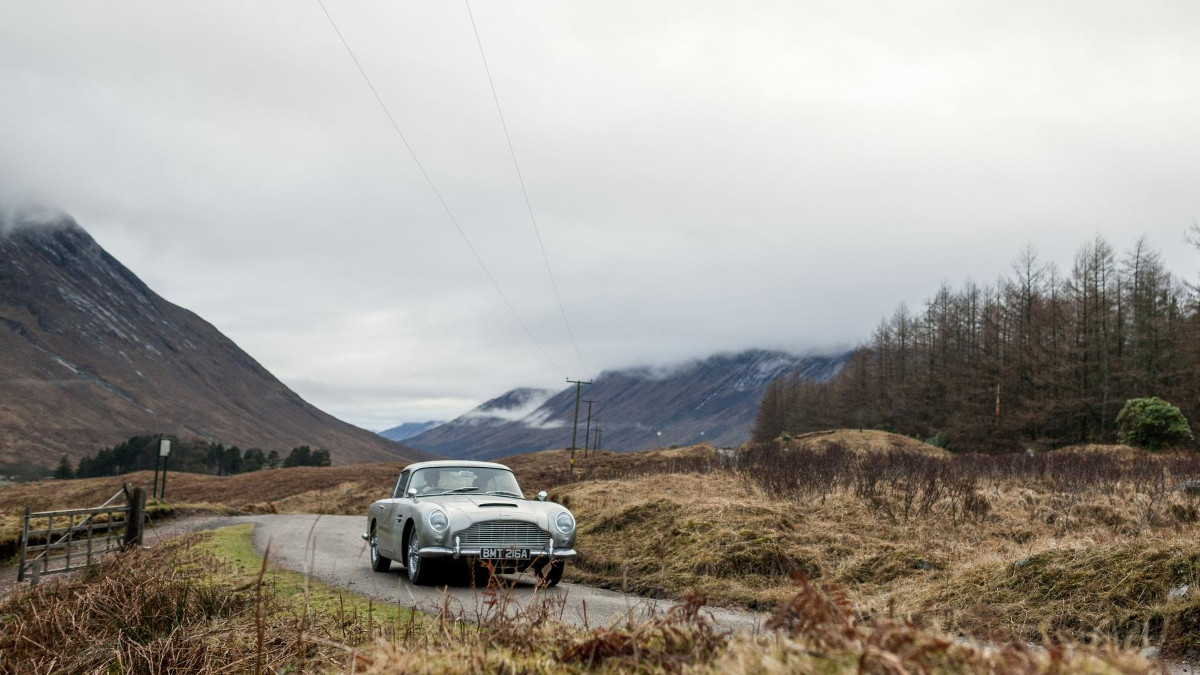 A second production-spec DB5 (minus gadgets at first, though some were later added) was also used in the film. We’ve driven it. And soon after the movie’s release, two ‘press cars’ were commissioned for promotional work, bringing the total number of ‘official’ Bond DB5s with gadgets to four. But thanks to Aston Martin, there’s about to be a load more...

Last year, as part of its plan to build a different ‘continuation’ car every year until, well, it runs out of cars, Aston Martin and EON Productions (the company behind Bond) announced they would build 25 new Bond DB5s. 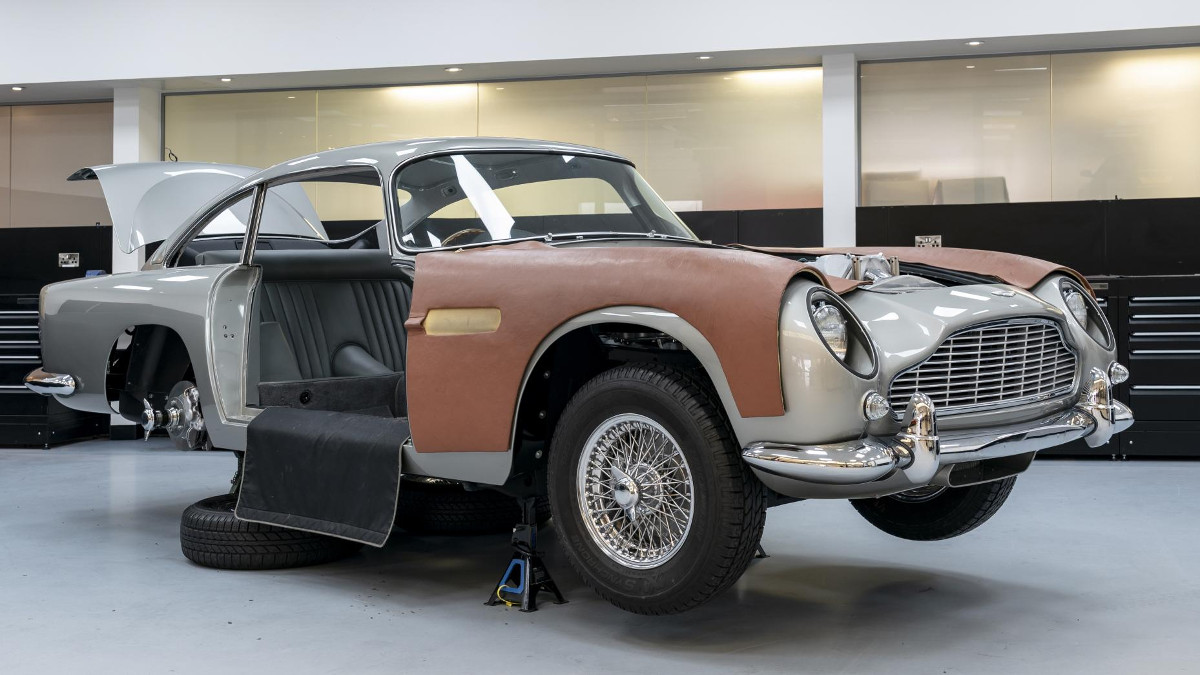 These cars will cost £2.75 million (around P185.4 million) before tax and will feature gadgets developed with help from a chap called Chris Corbould, a special-effects genius who worked on Inception and The Dark Knight. Oh, and the last 15 James Bond films. Except Octopussy. Maybe that’s why it was a bit rubbish.

Anyway, these DB5s will be new cars built to modern-day quality standards by Aston’s Works Service department in Newport Pagnell. They will, therefore, be better cars than DB5s from the ’60s, with modern corrosion protection and better fit and finish and paintwork. President of Aston Martin Works Paul Spires says, “If we delivered customers the car as it was built in the ’60s, it wouldn’t be acceptable.” 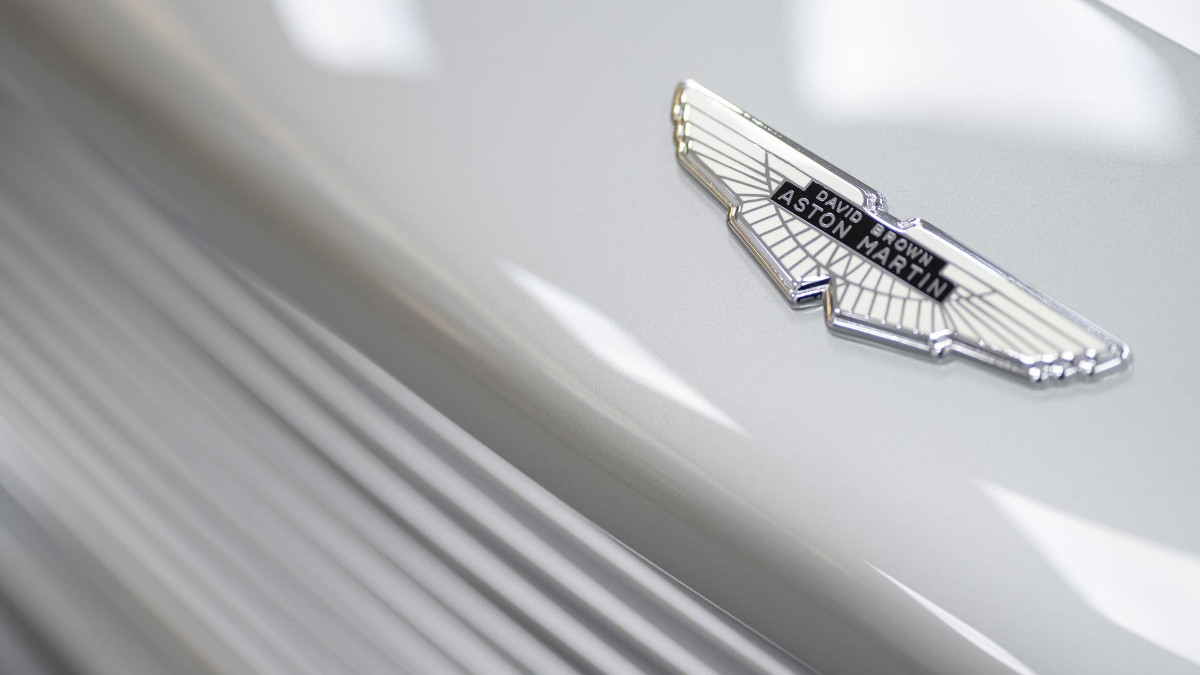 It will be the third ‘continuation’ car of Aston Martin Works after the DB4 GT, of which 25 were built, and the DB4 GT Zagato, of which 19 have been sold. The former cost £1.5 million (around P101.1 million) plus local taxes. The Zagato was only available as one half of the £6-million (around P404.5 million) ‘DBZ Centenary Collection’, along with a special DBS Superleggera.

Why 25 DB5s? Mainly because next year’s Bond film, set for release just under a year from now, is the 25th of the franchise (odds are a DB5 will be in it, alongside an unspecified electric Aston). But also because Works has to recoup its investment. These things aren’t cheap to buy, and they’re not cheap to build, either. The majority have already been sold to customers all over the world, and Aston is confident said customers are going to want their cars seen in public. That they won’t just hide them away in garages, ready to be flipped for twice the price a couple of years later. Wishful thinking? 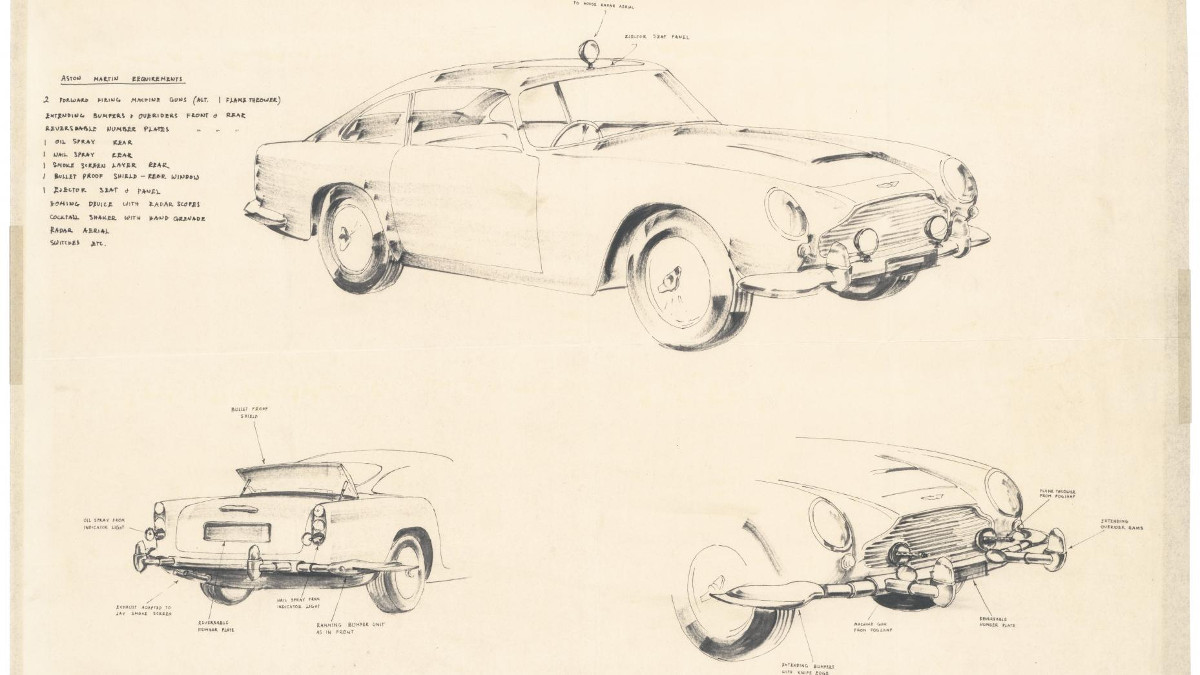 The DB5 pictured is an original, midway through restoration. Its owner has kindly let Works pore over it, taking measurements and so on, so it gets the continuation car spot-on. Development continues, with deliveries set to begin in the summer of 2020.

None of them will be road-legal—at least not from the factory—but Aston is nonetheless keen to stress the continuations (and their gadgets) will be “very robust” things. Not like actual movie cars, which are designed to work maybe a handful of times. To that end, each one will take some 3,000 hours to put together. Spires says the company’s aim was for the first owner’s “son, grandson, or great-grandson” to be able to ”push the little red button on the gear stick and make the guns work.” 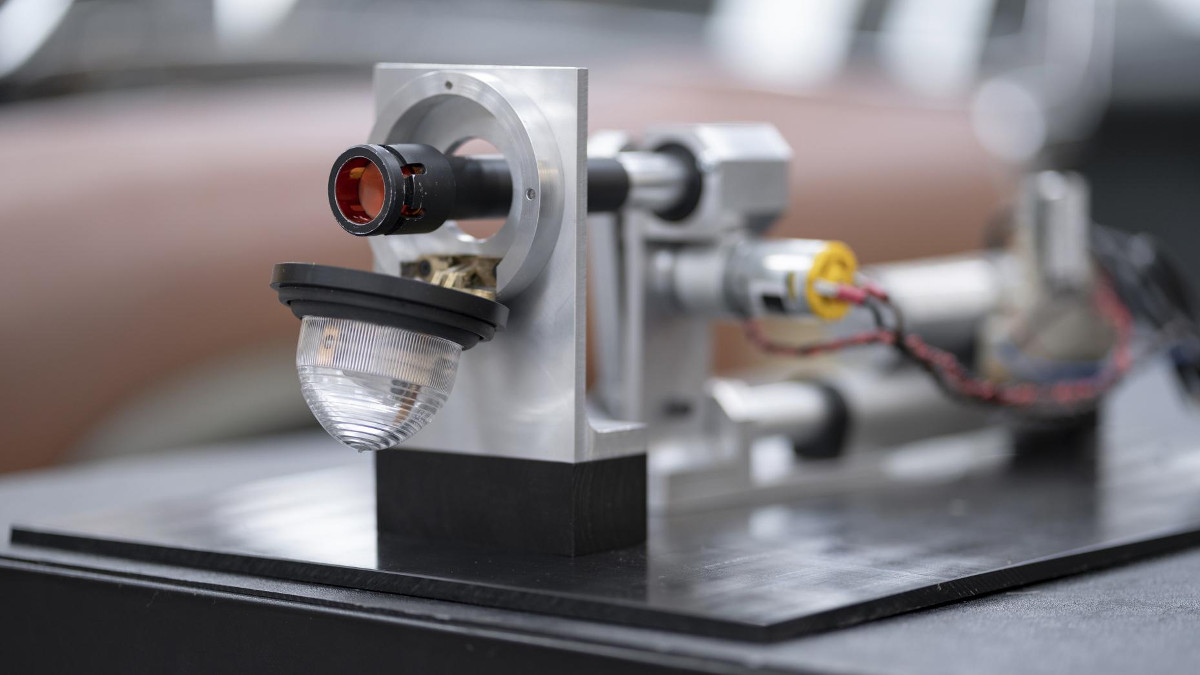 Ah, yes, the guns. They won’t be real, obviously, but they will be very cool. Corbould shows us a prototype of the mechanism, set up on a workbench. The sidelight pops down to reveal the barrel, a faithful replica of the original’s Browning. A light inside flashes to simulate fire, as it moves in and out of its housing as though someone’s pulling the trigger. There’s no sound for now, save for the compression and extension of the actuator, but Corbould tells us they’ll fix that by incorporating a loudspeaker into the design. “We’ll probably have a volume knob,” he says. “If it was me I’d have it really, really loud. But we have to cater for everyone.” 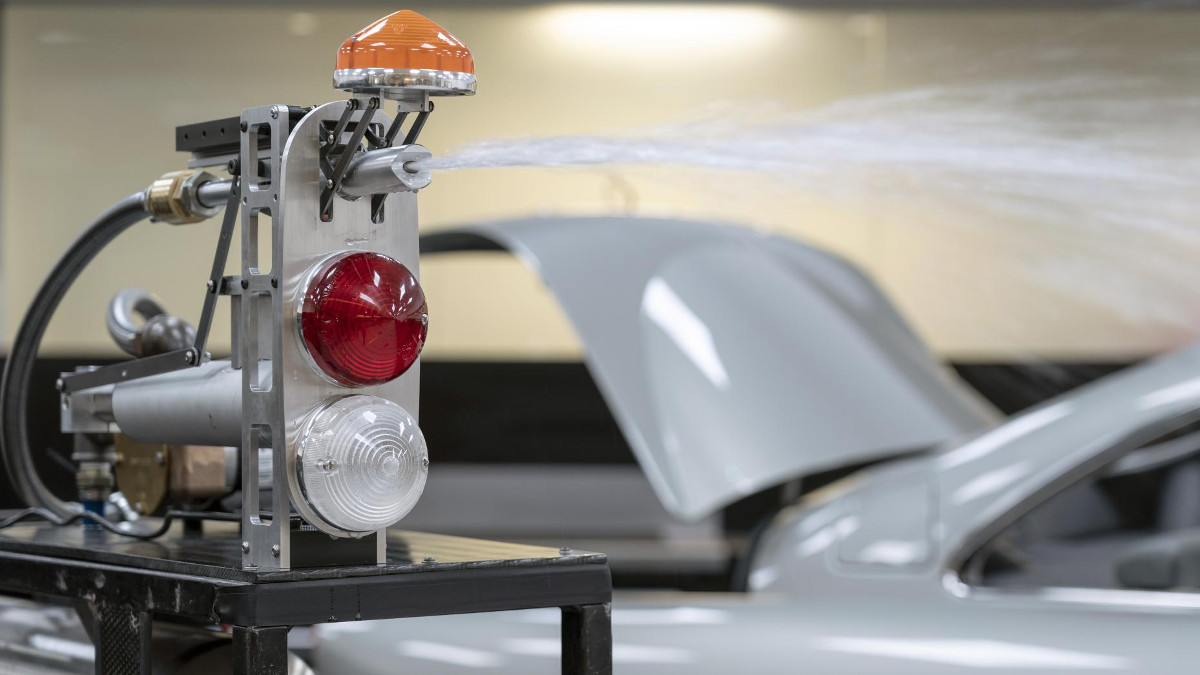 Next up is the oil slick. Once more, health and safety has had their say and vetoed the idea of having an actual oil slick back there. So the continuation cars will instead spew water from their taillights, probably dyed black or brown for the full effect. Corbould says the team is working on increasing the pressure so you get a proper jet of water, but even this early prototype of the mechanism spits it out with a decent amount of force.

The last gadget we were given a look at was the smoke screen. Easy, when you’ve got all the space in the world and a lot of electricity to work with, but less so when you have to package the same effect into an Aston Martin. The little metal box takes a few seconds to warm up, but then a long press of the button delivers a thick cloud of white smoke that would certainly derail any pursuing baddies. 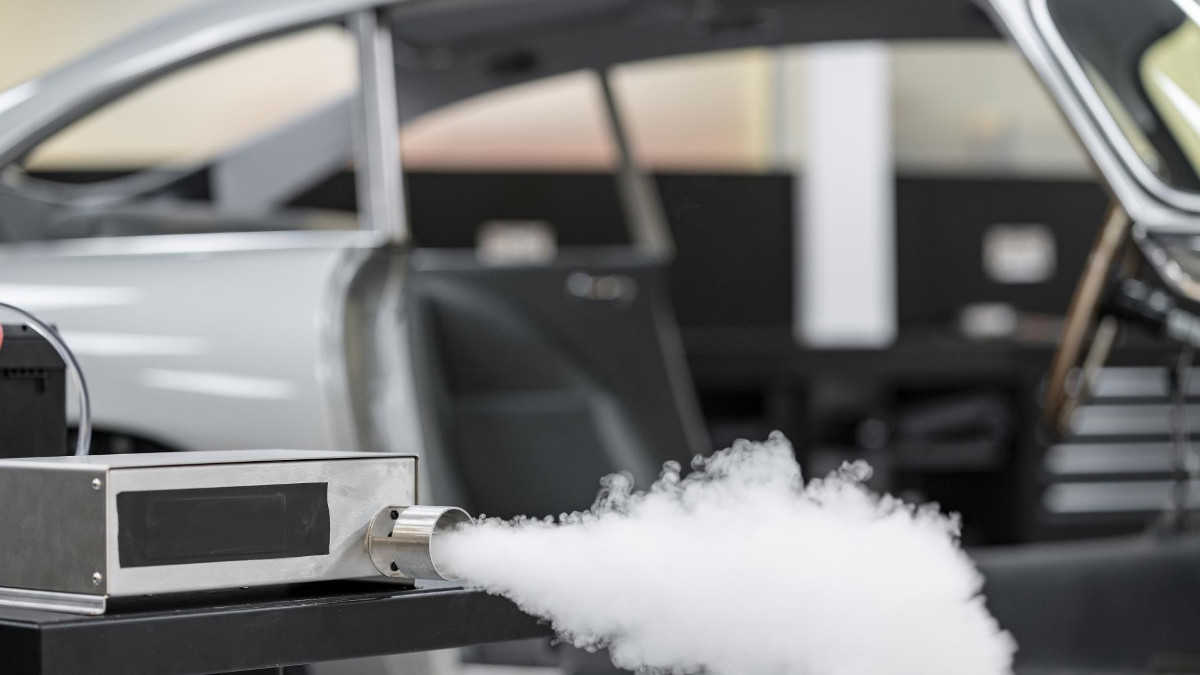 Those are the gadgets Corbould is working on. But others confirmed for the continuation DB5 include revolving number plates (DB5s will be supplied with the same three sets of plates that appeared in Goldfinger) and the rear bulletproof screen (which, yes, may actually be bulletproof). “We’re having a few challenges with the ejector seat and the wheel spinners,” says Corbould. “We’re trying to achieve something.”

Inside, all the switchgear will be mounted in the center armrest and on the center console. There will be a button on the gear lever, a telephone in the driver’s door, a hidden weapons/storage tray under the front seats, and a ’60s-style satnav just like Bond had. 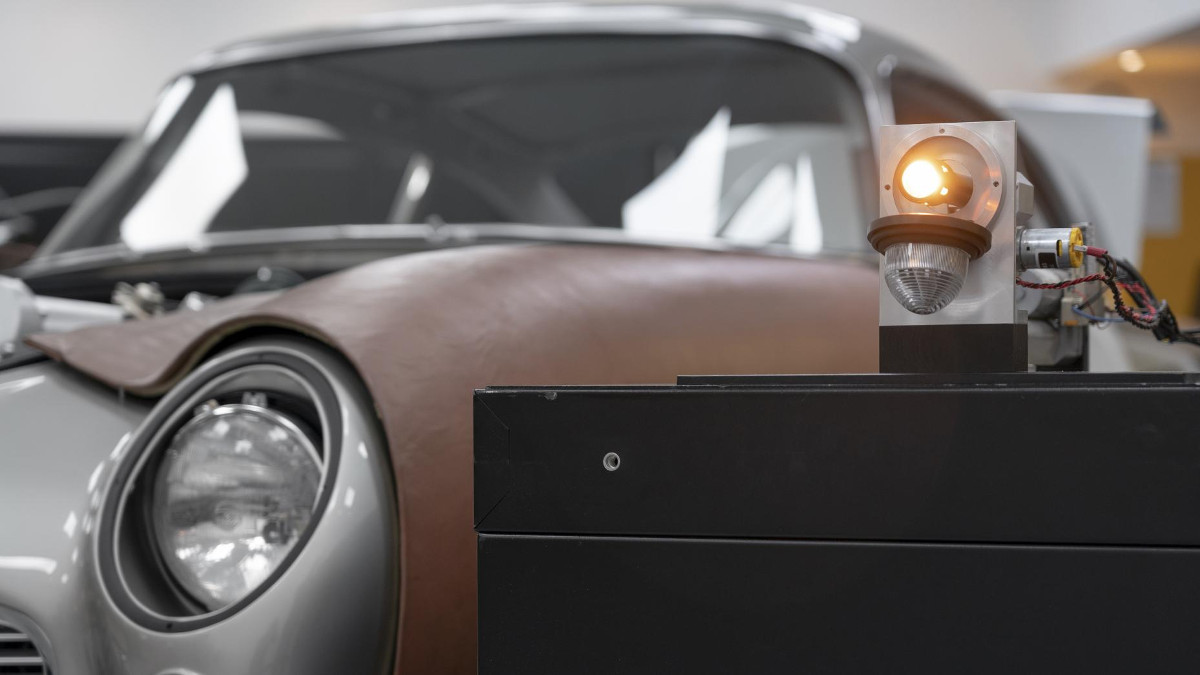 Aston stresses all the cars will be “authentic reproductions of the DB5 seen on screen” with only “sympathetic modifications to ensure the highest levels of build quality and reliability.” To that end, you can have it in any color you like. So long as it’s silver. You can, however, choose between left- and right-hand drive.

We can’t wait to have a go. 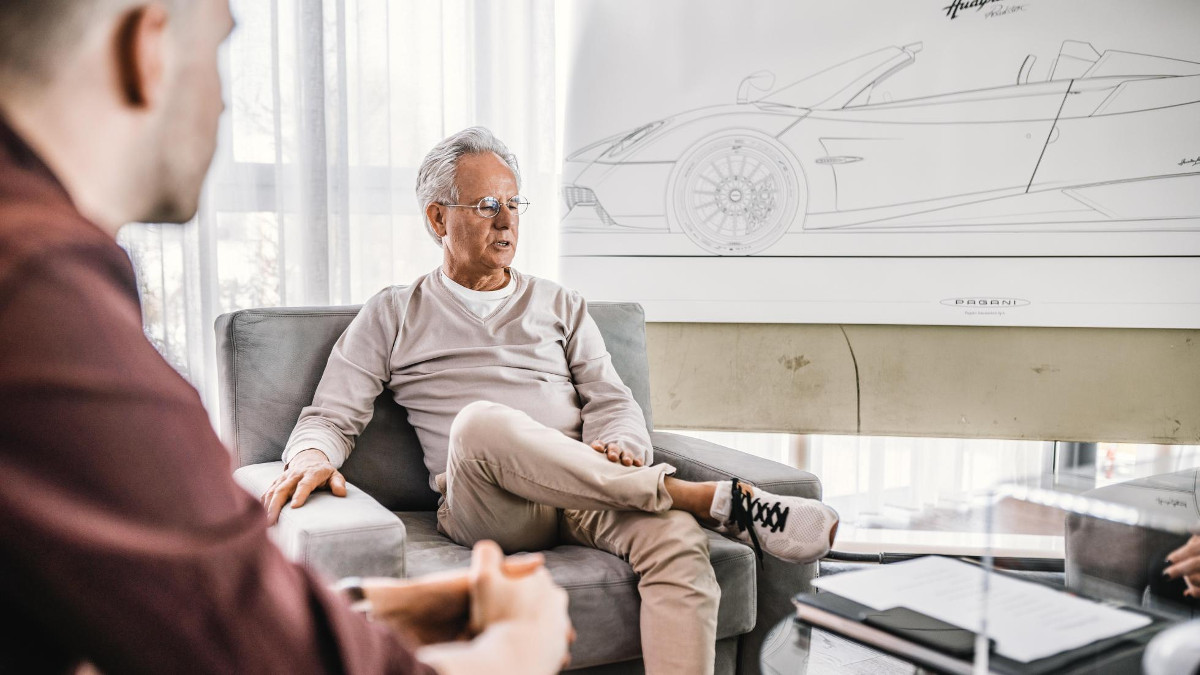 Horacio Pagani wants to do more than just design cars
View other articles about:
Read the Story →
This article originally appeared on Topgear.com. Minor edits have been made by the TopGear.com.ph editors.
Share:
Retake this Poll
Quiz Results
Share:
Take this Quiz Again
TGP Rating:
/20