Faster than a speeding bullet. Well, not quite, but close
by Dinzo Tabamo | Apr 24, 2009
CAR BRANDS IN THIS ARTICLE

Call us biased, call us partial, but it\'s a fact. BMW is a great car company that makes great cars. Even when they\'re making flame-surfaced cars that enthusiasts revile, the fact that fans care enough to protest is still a testament to the legacy of BMW, and the expectation to be true to that legacy.

BMW seems intent on continuing that legacy, even when the world\'s finite supply of dead dinosaurs has been exhausted. As an alternative to fossil fuel, BMW has turned to a virtually inexhaustible resource; hydrogen. If they can convert political chatter to energy that would even be more limitless, but even BMW can\'t extract energy from low-grade crap.

The carmaker\'s decision to stick with a hydrogen-fed combustion engine was based on hydrogen\'s emission-free solution as well as meeting the required driving dynamics and agility, which is a BMW trademark no matter what kind of fuel is in the tank.

Beginning with its first hydrogen car way back in 1979, BMW worked on the technology until it culminated in this car, the H2R.

At first glance the H2R does not look real, it looks like a Z4 that melted on a hot plate, cooled, then hardened. Then you see the latest M5 wheels, the protective cowl over the driver\'s seat and it\'s apparent that BMW is serious about this car and what it means. The H2R is fitted with a modified 6-liter V12, the same engine found in the range-topping 760 and 760Li sedans complete with the latest Valvetronic variable valve technology.

What\'s astonishing isn\'t that the V12 engine can be modified to take hydrogen, but that the H2R was able to demolish several world records during high-speed test runs at the high-speed Miramas Proving Grounds in France. A total of nine land speed records for internal combustion engines fell that day. Among the records broken by the H2R were the flying and standing starts for distances ranging from 0.5 kilometer to 10 kilometers, and traveling a kilometer in less than 12 seconds, by that time the H2R had reached its maximum speed of over 300kmh. The H2Rs ability for velocity can also be attributed to its special design and construction as well as the light carbon-fiber outer skin.

This mutated Z4 is just the beginning. BMW intends to roll out a dual-fuel 7 Series sedan before the end of the current model. By that time BMW will have the world\'s only dual-power premium sedan.

So when the day comes that oil becomes scarce, not only are there alternatives, but we can have our cake and eat it too with clean, abundant fuel and driving performance at the same time. 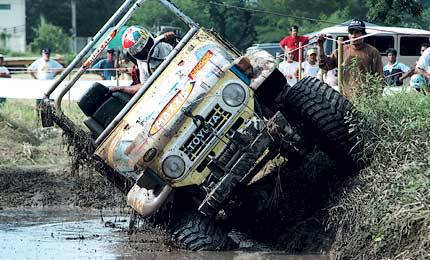 3 most common off-roading stints in the Philippines
View other articles about:
Read the Story →
This article originally appeared on Topgear.com. Minor edits have been made by the TopGear.com.ph editors.
Share:
Retake this Poll
Quiz Results
Share:
Take this Quiz Again
TGP Rating:
/20