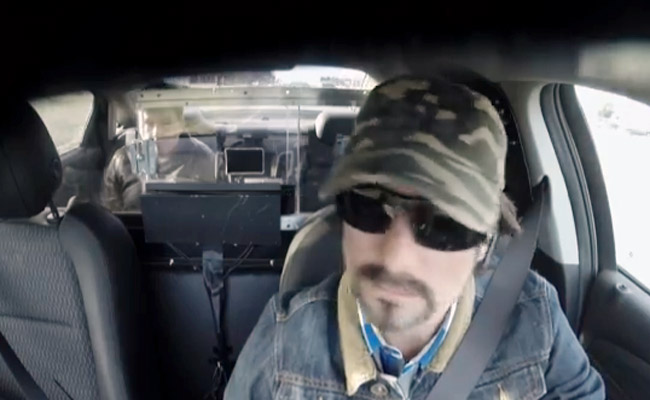 Last year, Pepsi Max produced a viral video called Test Drive, in which NASCAR legend Jeff Gordon was supposed to have pulled off a prank on an unsuspecting car salesman. It was a funny video that became a hit. Problem was, one automotive writer--a blogger for Jalopnik named Travis Okulski--called them out and declared the video to be fake. Not only was Okulski able to correctly conclude that a stunt driver (and not Jeff Gordon) had been driving the Camaro, he was also able to tell (correctly again) that every person in the video--including the car salesman--was an actor.

Obviously, the accusation of fakery deducted from the overall effectiveness of the viral video, and basically branded both Pepsi and Gordon as total shams. Apparently, this didn't sit well with the soda company and the race driver. They would have to get Travis back one way or another.

That opportunity came when Travis's boss--Jalopnik editor-in-chief Matt Hardigree--agreed to connive with Gordon to successfully stage a real (at least this time) prank called Test Drive 2. This time around, Travis would really be an unsuspecting victim. Here, Gordon pretends to be an ex-convict cab driver who picks up Travis from the latter's hotel. The fun begins when a police car appears and chases the taxicab.

As to how Travis unwittingly allowed himself to be set up, you may read his full narration here.

Now watch the video and know the definition of "sweet revenge."

Meeting the G-Shock creator and learning what car he drives
View other articles about:
Recommended Videos
Read the Story →
This article originally appeared on Topgear.com. Minor edits have been made by the TopGear.com.ph editors.
Share:
Retake this Poll
Quiz Results
Share:
Take this Quiz Again
TGP Rating:
/20