What do you do when you see an ambulance behind you on the road? 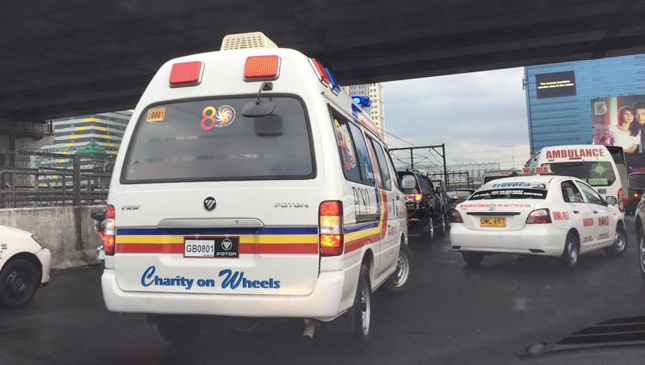 I had trust issues with anything that had to do with government. I had witnessed one too many times how government employees abused official vehicles. So when I started driving, I decided that I would not get out of the way of any government vehicle or escort or anything with flashing lights or sirens.

This was the case up until eight years ago, when I found myself sitting by the driveway in front of a hospital's emergency room one evening. Two ambulances arrived, each carrying a patient and an accompanying family member. A couple of minutes later, one family member came out of the ER crying, and did not bother going back in. The patient probably didn't make it.

That got me really thinking. How many minutes away from death could a patient in an ambulance possibly be? How much time would it take to get to the hospital in time? I imagined how agonizing it must be--to be in an ambulance stuck in traffic.

After that, I decided to give ambulance drivers the benefit of the doubt--no matter how dark the tint, no matter how beat-up an ambulance looked. I resolved that I would start pulling over and letting ambulances pass. After all, you never know.

Little did I know that I would experience that agonizing ambulance ride myself.

I was out of town two years ago when I got the call.

"Your mom needs a blood transfusion."

While I was away, she had gotten a nosebleed that wouldn’t stop. Shortly after my brother had been born, she had throat cancer, so I was beyond worried. I booked the earliest flight out, and my friend and I slept at a table outside the airport while waiting for the facility to open. I hopped on the plane--summer dress, backpack and all--hoping to get to the hospital before anything else happened.

My mother was released a few days after the blood transfusion and insisted that she was okay and that I drive her back to the province where she wanted to stay, instead of in Manila near the hospital. Unfortunately, as soon as we arrived in the province, the bleeding started again. My mom, being the strong and stubborn woman she is, and my dad, who was in denial at the time, was convinced it would eventually stop. After going through one thick bath towel in spite of first aid being applied by my cousin (a nurse), I decided: "F*ck this...we’re getting an ambulance and we’re getting out of here, right now."

I called my aunt who called the mayor’s office, and they quickly dispatched an ambulance to our house. It was a van that had a small bench on one side, a rolling hospital gurney in the middle, a siren, and flashing lights that somehow transformed the vehicle into an ambulance. It was an emergency and I wasn’t going to be picky. The siren and the lights would get us through traffic quickly.

We loaded my mom into the ambulance, with my nurse cousin and another cousin (to make sure I did not have a mental breakdown) in tow because, unfortunately, the ambulance only came with a driver and a rusty oxygen tank that rolled around with us.

We took off, overtaking cars and bouncing the entire way. My cousin had managed to apply first aid and slow the bleeding, but it would gush out again with every bounce. What was worse was that our main route was under construction after being destroyed by trucks carrying tons of quarry to build a stadium in the area. The alternate route was also being destroyed and clogged by heavy trucks and buses. What used to be a 45-minute drive now turned into an excruciating two- to three-hour one. We were fast running out of towels and tissue, and I knew my mom’s small, 100lb frame was fast losing blood. In spite of the fear in her eyes, she asked me to pray. It had been a while since I had last prayed, but I called on whatever faith I had left, and did as she asked.

Stuck along the one-way alternate route, I could not wait any longer. I jumped out and sprinted nearly a kilometer to the traffic officer. While gasping for air, I somehow managed to tell him: "Ambulance!!! Ambulance!!! Please! Go! Go! Go!"

He signaled for traffic to go and I told him to wait for the ambulance before stopping it again. I jumped back in when the ambulance finally reached where I stood waiting. We made it back onto the main road, where we had to once again dodge traffic. Most vehicles would not get out of the way in spite of the sirens, the lights, and me madly flailing my one arm outside of the driver’s window. I was frustrated. And angry. Couldn’t they see it was an emergency?

I had a pleasant surprise, though. Guess which drivers often pulled over to give way?

It was truck drivers. Yup. TRUCK DRIVERS! (Thank you!)

A truck in the opposite direction even stopped so that we could counterflow and make a right going to the nearest hospital. We were still in the province and it was taking too long to get to the hospital in Manila because of buses and jeepneys unloading passengers near the toll plaza, so I decided we needed to stop at the closest hospital along the way.

My mom was unloaded and given something to temporarily stop the bleeding. We let her rest, hydrated her and observed her for a few minutes before putting her back in the ambulance. I set about cleaning up the ambulance while waiting so that she wouldn’t have to see all the blood that she had lost, soaked up by several towels and rolls of tissue. I also distinctly remember that somehow, the ambulance had quickly accumulated ants feeding on the bloodied tissue.

She seemed stable so we took off again, but we were unsure of how long it would be before she started bleeding again. The sirens and the lights were fired up again. Still, in spite of the blaring emergency equipment, many drivers in Manila simply refused to get out of the way. I was screaming in my head:

TIME IS OF THE ESSENCE, YOU F*CKING IDIOTS! THIS IS AN EMERGENCY! AMBULANCE! HELLO!!!

But I had to keep my cool for my mom’s sake, and yelling at inconsiderate drivers was not going to make things any better (although I did wish to do a lot of not-so-legal things to get their attention and cooperation). I was still waving my arm outside the window. I wanted to wave a bloody towel instead, but we were using the last one left to keep my mom warm.

It was frustrating. Even before this happened, I had always pulled over for ambulances. In fact, whenever I heard the siren, I looked for the ambulance in my rearview or side mirror so that I knew where to place myself, which was out of the ambulance's way. And when I moved out of the way, most people behind me followed suit. Unfortunately, this time, with my mom in the ambulance, there weren’t very many drivers who initiated the proper protocol. And so because no one was pulling over, everyone wasn't pulling over.

I was most disappointed when we finally made it to the front of the hospital, and all we had to do was make a left. A woman--in opposite traffic in a sedan and who was clearly a doctor--did not want to give way. You’re a doctor for crying out loud! You of all people should have understood the situation.

She had to finally stop and give way because we weren’t going to let her stand between us and the emergency room, but she didn’t do it without giving us an annoyed look.

In spite of the many heartless drivers who refused to pull over, we made it to the hospital in time, thanks to our skilled driver and the first aid given by my cousin. My mother got the medical attention she needed. Just in the nick of time.

Time. It’s something that a person who needs medical attention may not have enough of.

So the next time you see an ambulance, I know you’ll have your doubts. But please: JUST GET THE F*CK OUT OF THE WAY. You never know when your own life will depend on people doing the same for you. 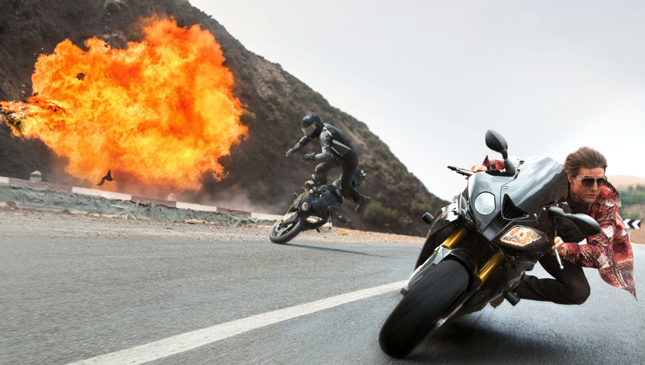 'Mission: Impossible' movie franchise is still revving
View other articles about:
Read the Story →
This article originally appeared on Topgear.com. Minor edits have been made by the TopGear.com.ph editors.
Share:
Retake this Poll
Quiz Results
Share:
Take this Quiz Again
TGP Rating:
/20