Chevrolet PH wants you and your family to watch 'Transformers 4' 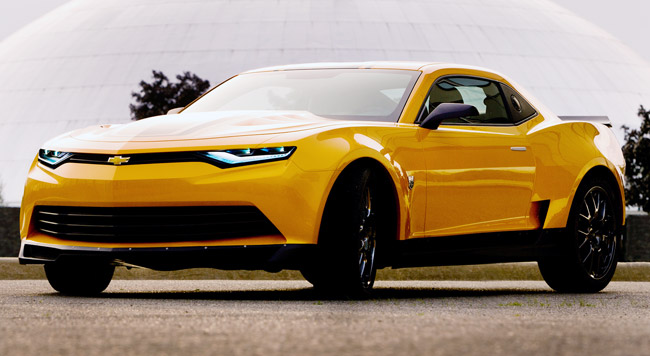 You've probably heard that Chevrolet is launching its latest advertising campaign next week, otherwise known as Transformers: Age Of Extinction. Yep, that Camaro concept in the photo above is the latest incarnation of Bumblebee. Anyway, the fourth installment in Michael Bay's series of Chevy ads robot flicks is showing in the Philippines beginning June 25.

To help promote the local release of the film, Chevrolet Philippines has shared with us the official trailer and a montage of the Chevrolet cars featured in the commercial movie. (Don't mind the "June 27" date in the trailer; that's for North America.)

Now, the local Chevy distributor is also kind enough to give away to TopGear.com.ph readers five (5) tickets to an exclusive screening of the motion picture on June 28 (Saturday) at 11am at the SM Megamall IMAX movie theater. Only one (1) winner gets to bag all five tickets. Winner takes all, in other words. So he or she can bring along the whole gang or the entire family.

How to win the tickets? Let's play a simple game. You already know that the above-mentioned Camaro concept's Autobot name is Bumblebee. The Corvette Stingray is also in the movie as Autobot Crosshairs. Here is our question:

If you could give an Autobot name to one Chevrolet model that's available in the Philippines, what would it be?

You only need to submit one Autobot name for a specific (and locally available) Chevrolet model. For example:

Just provide one (1) Autobot name for any local Chevrolet model. Type your answer together with your full name in the comment box below. Answers will be accepted until June 24 (Tuesday). Only one answer may be posted by each person; multiple entries will result in outright disqualification. The most awesome answer--to be chosen by our editors--wins the five tickets. The tickets may be picked up either at the Chevrolet Philippines office (5F ALCO Building, Jupiter Street, Makati City) or at the venue itself just before the screening.

Instagram post of the day: Look who's driving the McLaren P1
View other articles about:
Read the Story →
This article originally appeared on Topgear.com. Minor edits have been made by the TopGear.com.ph editors.
Share:
Retake this Poll
Quiz Results
Share:
Take this Quiz Again
TGP Rating:
/20