6 Lessons that helped me conquer my fear of big bikes

The Ducati Riding Experience showed me the way
by Matthew Galang | Jun 4, 2018 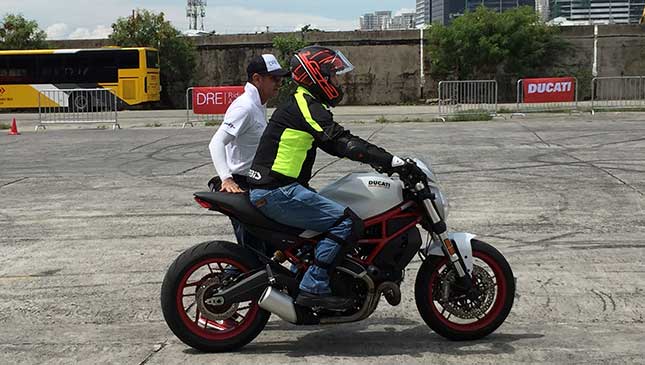 Rain or shine, I’ve been riding almost on a daily basis for the past few months.

However, the riding skills I have (if ever I had them) were those from my dad's informal training sessions, some YouTube videos, and e-books that I downloaded. There were some riding techniques I learned through trial and error on the chaotic streets of Metro Manila, only to realize this process did more harm than good.

Without the proper riding skills, I often find myself panicky everytime I'm confronted with a dangerous situation on the road. Hesitation and ignorance can kill, I was told.

I've always wanted to enroll in a formal riding training program. But with a student’s budget, I thought that this is just another far-fetched dream.

Until one fine day, an invite to the Ducati Riding Experience (DRE) landed on my lap.

Like many introductory riding courses, the DRE focuses on helping riders—either with little or no riding experience—ride safely and efficiently. This experience also extinguished my fear of big bikes, particularly the Ducati Monster 797+ which I rode during the training.

Let me share to you six riding tips from my day-long class with the DRE that I value most. 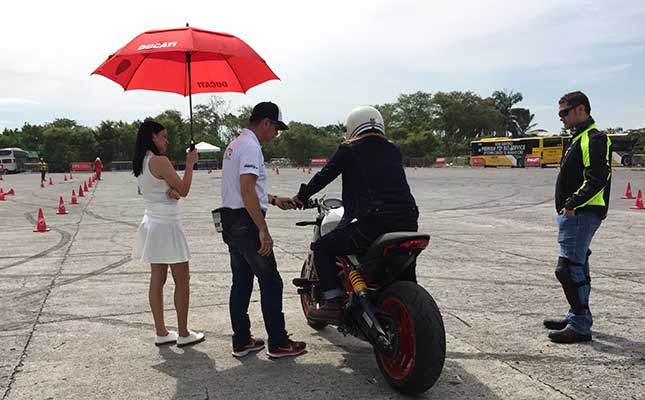 1) It’s all in the balance. Our coach, former superbike champion Miguel Bichara, demonstrated to us that motorcycles are well-balanced machines. So much so that it’s possible to keep the bike upright by holding even just the very end of the brake or clutch lever with two fingers.

He next taught us how to balance the bike while moving at very low speeds. Through modulation of the rear brake and clutch levers, I learned how to control and balance the Ducati Monster with both feet firmly kept on the pegs. This exercise was more fun to do than I earlier anticipated. 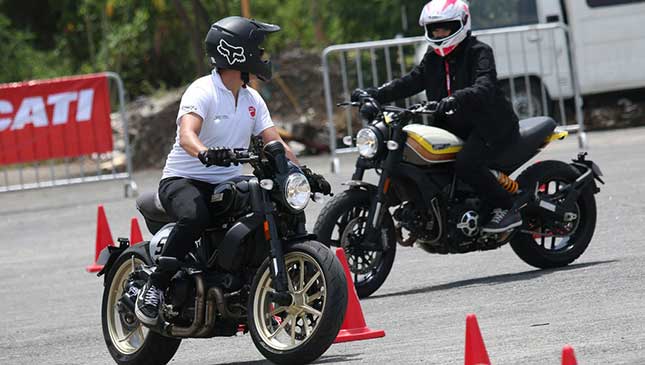 2) Big bikes are a friendly species. Most of the other students in our group were totally new to riding a motorcycle, not only with a manual gearbox but with big engines. My personal ride is a humble scooter, so I almost panicked when we were told that our group was assigned the Ducati Monster 797+—scarier than the friendly-looking Ducati Scramblers accorded to the other groups. Aside from the model name, I find the appearance and size of this burly horse intimidating at first.

But after spending more saddle time, I discovered that the Monster isn’t as monstrous as it looks. The seat height is just enough for my feet to touch the ground so I felt comfortable throughout the course. The engine is not a wild animal that will throw you for a loop at the slightest twist of the throttle. 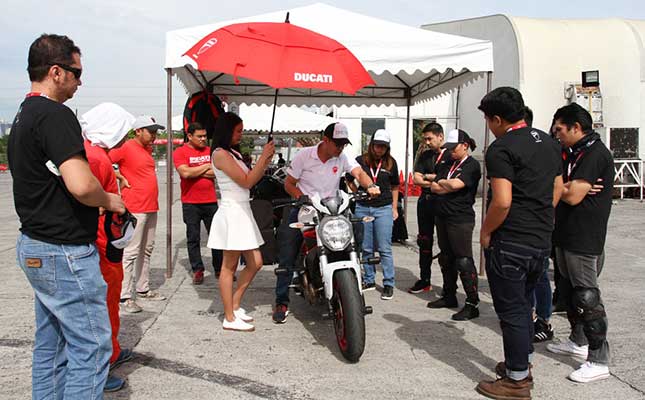 3) The ABS has a purpose. My personal motorbike doesn’t have ABS, so I always viewed it as a luxury feature with very little use. But as discussed in the classroom, riding on the road or the track will often present you with situations where ABS will prove invaluable.

To prepare us for such emergencies, coach Miguel had us perform a hard-braking exercise, showing us how to effectively brake even at high speeds. I was slightly anxious to do this exercise after seeing scary videos of riders hitting the brakes too hard and flipping their bike over.

With the proper body position, I was able to effectively brake on the tarmac and on sand without the rear of the bike coming up or sliding. That was ABS at work. 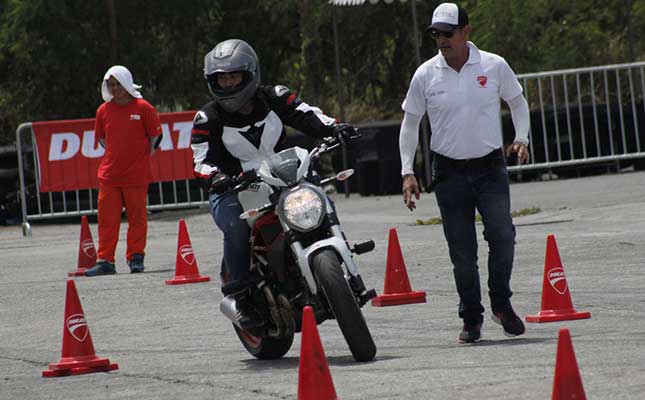 Braking necessitates correct body positioning, too. It’s imperative that when under hard braking, you move your back on the seat as far back as possible, grip the tank with your knees, and extend your arms to support your body. You do these in order to shift the balance to the bike's rear during braking.

Not getting into the right position when you hit the brakes hard will make you fly over the handlebars. Only heaven knows what happens next. 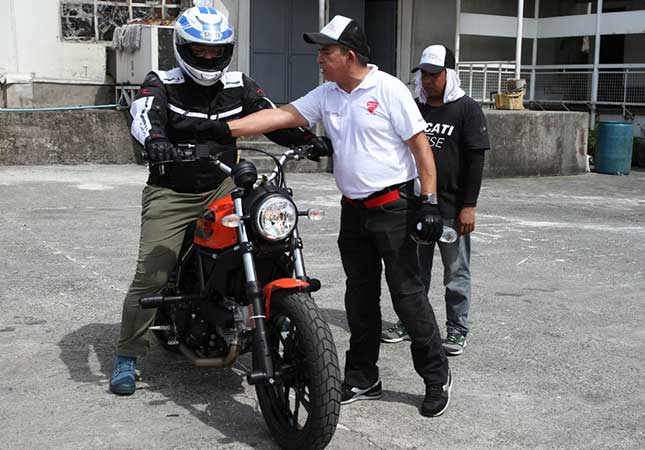 5) Target fixation is not just a myth. It’s often said that when on a bike, looking where you want to go will help you get there safely. True enough, where you train your eyesight does more than just give you an idea of what’s up ahead, but it also helps steer the bike quicker and better.

Your body subconsciously steers the bike toward whatever you're focused on. The worst thing you could do with your eyesight is look directly at the ground in front of your front wheel, because you’ll likely have a very intimate moment with the pavement. 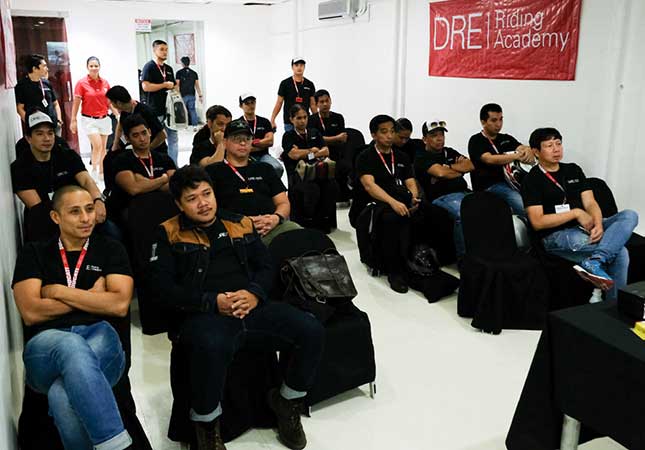 6) Trust the bike…and yourself. Riding a motorcycle is psychological as much as it is physical. Thinking that you can make it around the corner legitimately will help you make it through.

I experienced the psychological power of belief during the circle test, where we students were made to ride thrice around a large circle made of traffic cones, and then thrice more inside a smaller circle the size of a living room.

I was intimidated by the smaller circle aspect of the test because it looked so tight and dizzying. But after a couple of not-so-successful attempts, I was able to negotiate the tight circle thrice both clockwise and counter-clockwise. I did this by trusting the bike, believing in the technique taught to me, and believing in myself.

Of course, Coach Miguel standing in the middle of the circle shouting almost fatherly words of encouragement helped, too. 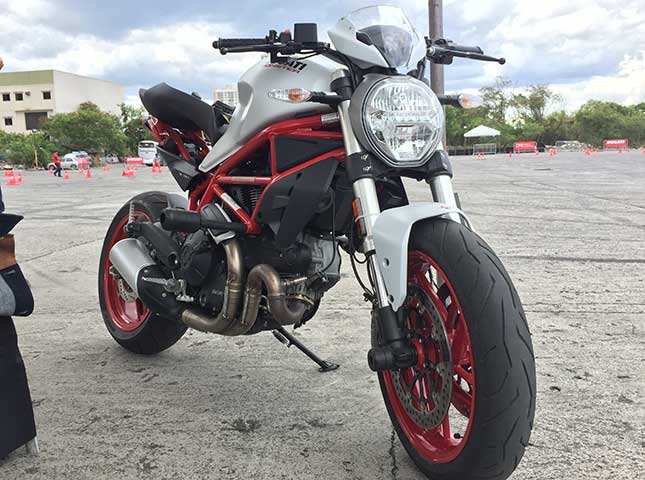 After that sweaty Saturday in Libis, I’ve become an even bigger supporter of formal riding schools.

The DRE uses scientific ways to learn the basics of motorcycle riding by combining theoretical sessions with practical exercises in a controlled, safe training venue. From being paranoid, I’ve transformed into a big bike fan after that brief but memorable encounter with the Monster 797+.

My big hugs to the Ducati Monster 797+! And a snappy salute to the DRE! 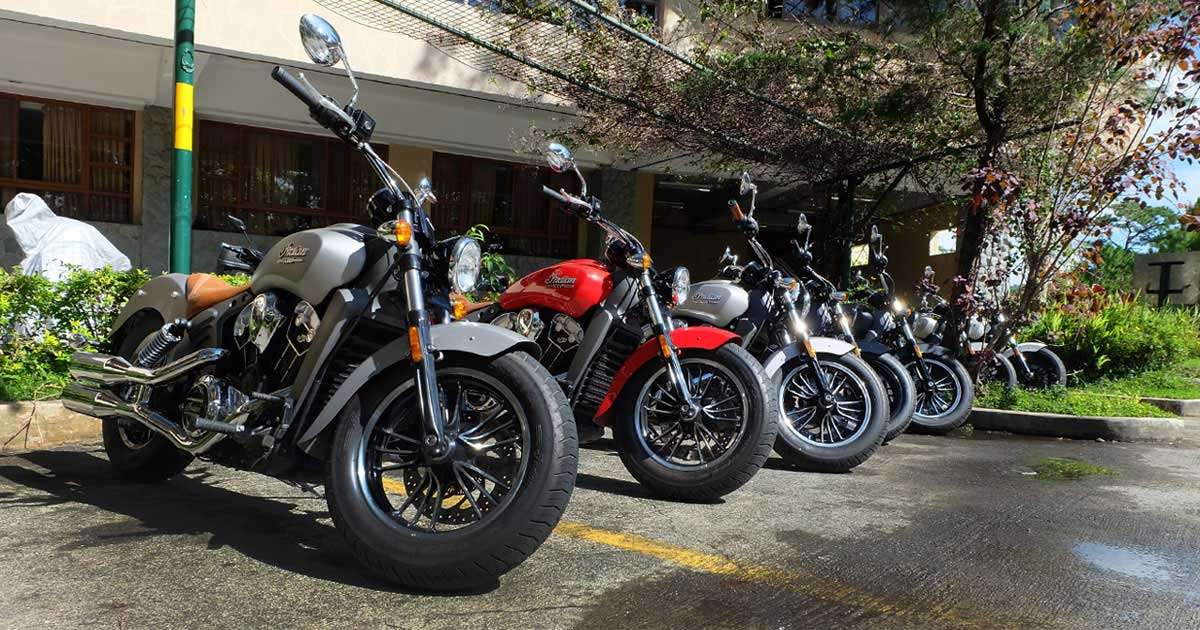